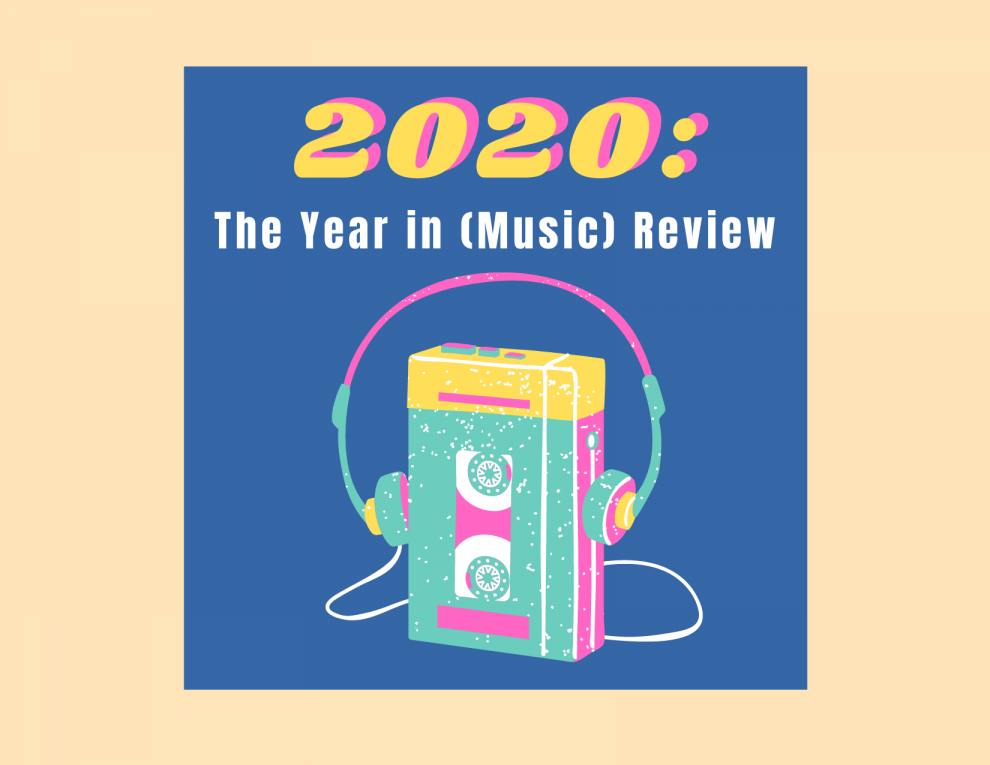 2020 might have been a living nightmare for most of the world, but amid the raging cynicism and rampant socio-political turmoil, last year was graced with some truly amazing music. While narrowing down my favorites was difficult, here are my top 10 albums of 2020.

On “My Agenda,” Dorian Electra explicitly and violently captures an American subculture birthed in millennial misogynistic narcissism and nurtured by toxic internet culture. Electra reinvents themselves into a character that blurs the line between caricature and gross accuracy and adopts the tenets of “edgelord” culture and internet memes. The result is an album that is both dynamic and repulsive in its content. The editing and lyrical content of “My Agenda” reflects the essence of their “edgelord” character and sheds light on a subculture that has remained fairly obscure through the anonymity of the internet. I can’t forget to mention that “My Agenda” includes my favorite feature of the year, Rebecca Black, who crushes it on the track “Edgelord.”

Released in December 2020, “Man On The Moon III: The Chosen” is Kid Cudi’s latest addition to his personal “Man On The Moon” collection and his first major release since the groundbreaking and critically acclaimed “KIDS SEE GHOSTS” project with Kanye West. MOTM3 is “a vibe,” but also laced with themes of metaphysical introspection on loneliness and identity. Lyrics about isolation and fear of disappearing into the void are accentuated by the spacey sonic design and a consistent tone of spiritual helplessness. Tracks like “The Void” and “Lovin’ Me,” featuring Phoebe Bridgers, capture the same depressed, hopeless tone expected from a sad girl coffee shop album. However, Cudi’s mastery of capturing and expressing a distinctive atmosphere makes his sound versatile and unique.

To me, the band Indigo Girls has always been on the backburner of country folk artists — not as sonically iconic as The Chicks (formerly Dixie Chicks) and not as remarkable songwriters as Bonnie Raitt. “Look Long” is unexpectedly a contradiction to both those things, with a wide range of sound that feels very distinct. The band also stepped up their songwriting to the best I’ve ever heard it. From the bombastic and attitude driven opener “Shit Kickin’” to amazing ballads like “When We Were Writers” and “Country Radio,” the Indigo Girls tell an interesting and personal story that resonates with both the nation’s climate and the interpersonal struggles of their youth. The closing track “Sorrow and Joy” stresses the reunification of the country and rejecting hatred in the face of sociocultural division.

Whenever Natalia Lafourcade puts out a new album, it almost always ends up in my top 10. Nothing can compete with the beautiful and lavish Mexican folk she releases, and “Un Canto por México, Vol 1.” is no exception. From the first sounds of crickets and plucking strings on “El Balajú / Serenata Huasteca,” the sound instantly teleports you into an amber-colored world, her crystal-clear voice and gold-plated guitars shining over the yelps and cheers of the band. Lafourcade’s backing band is always sharp and inventive — the clarity of each instrument and the precision of the players sounds like something Stevie Wonder would envy, and the tonality and range of Lafourcade’s melodies are like those sung by ancient sirens.

“What’s Your Pleasure?” does for disco pop what Carly Rae Jepsen’s “Emotion” did for 80s synth pop. Drawing on elements of disco, synth pop and big band pop, Jessie Ware compiled, synthesized and modernized each of these genres into a clean, incredibly danceable pop album. While last year’s “Charli” from Charli XCX felt like a look into the future of pop, “What’s Your Pleasure?” is a celebration of what pop used to be and what future pop can draw from. With a Quincy Jones-like production and sensual, almost erotic performance by Ware, “What’s Your Pleasure?” had me dancing for hours alone in my room.

Only a few months after dropping the best album of 2019, Charli XCX gave us the first anthem-riddled masterpiece of the quarantine. Written and recorded entirely within the first few months of lockdown in England, “how i’m feeling now” is a smorgasbord of raw pop hits, glitchy electronic production and intimate lyrics revolving around the unique troubles of living in quarantine. The simple and approachable lyrics address missing friends, clubs and parties. This mixes with the interpersonal ballads of feeling alienated from the few people in your own social circle, painting an intimate and dark image of lockdown. The production on this album veers away from the clean, sparkly glitz of her 2019 hit “Charli,” and is full of distortion and glitchy instrumentals that feel inspired by something like Death Grips. For people in isolation, this album was like a hand reaching out to Charli XCX’s fans so they could dance and cry together.

After 40 years of making music, The Flaming Lips have still got it. After their awful collaborative project with Miley Cyrus, “Miley Cyrus & Her Dead Petz,” I had lost hope for the band’s sound and integrity. However, this new album destroyed all my doubts. “American Head” is an elegy to the American dream, a dream watered down by disillusionment, LSD-fueled enlightenment and nihilistic drug abuse. Songs like “At the Movies on Quaaludes” and “Mother I’ve Taken LSD” are cries of help to the void, as well as regrets on the inability to change the world. “God and the Policeman” bridges the gap between that plea and the harshness of the material world. An introspective and honest plea with humanity, “American Head” stands as a sorrowful reflection on American modernity.

3. Laura Marling: “Song For Our Daughter”

For an album so soft in texture and clear in sound, “Song For Our Daughter” filled me with so much pain and conflict. For one moment, the softness of Marling’s voice accompanied by the crystal-like plucking of her guitar brought me back to a lit fireplace in the dead of night in my living room. Then, the gravity and weight of Marling’s storytelling filled me with such melancholy I forget some of the tales are fictional. Marling’s folk instrumentation is traditional and sparse, leaving an empty space to blanket her words and pillow her melodies. Marling carefully creates this narrative of love, loss and pain — combining fiction with elements of her life to convey how she imagines the complicated relationship between a mother and daughter and their reality as women together. Not only is this one of my favorite albums of the year, but I also think it’s one of the best singer-songwriter albums in the last 20 years.

2. Freddie Gibbs and The Alchemist: “Alfredo”

“Alfredo” is a nostalgic, old-school hip-hop album that resurfaces the stories of 90s hip hop culture in a way that glamorizes but doesn’t sugar coat the cultural and social character of the time. Ripping over The Alchemist’s tape recorder and bedroom-like sound, Gibbs delivers a story of power and corruption, mirroring the life of a crack dealer with that of the New York City Italian American Mafia. His rapid and unique lyrical deliveries tell the stories like an unfolding scroll, not moving from chapter to chapter, but flowing from tale to tale of this drug dealing experience. His words are full of masculine bravado and colorful stories of making big money. The excellent features of Benny The Butcher, Rick Ross and Tyler, The Creator elevate this desire for gold and boats and women. All this gloating is laced with the unabashed truth of living a dangerous and almost suicidal lifestyle, and how his own dreams conflict with being a caring and present father to his family. Produced to a T by The Alchemist, “Alfredo” brought me back and back again into a different world that stands on the line between gleaning nostalgia and harsh realism.

This is the sophomore album to beat all sophomore albums. Since Phoebe Bridgers’ first release, “Smoke Signals,” she has worked on increasingly prolific projects such as Better Oblivion Community Center with Conor Oberst of Bright Eyes, and the widely celebrated and critically acclaimed “boygenius” with Julien Baker and Lucy Dacus. Finally back to solo work, Bridgers released her most mature and evolved sound yet. “Kyoto” was the rock anthem of the year and earned Bridgers her first Grammy nomination, while slow burners like “Chinese Satellite” and “Moon Song” ask questions of her audience in an insightful and mature way I would expect from a seasoned siren like Joni Mitchell or Carole King. In this album, Bridgers pulls together everything she learned from her former projects until they coalesce into rocking bangers like “I Know The End” and retreating to her “boygenius” bandmates for the intimate “Graceland Too.” The best part about “Punisher,” aside from its heart-wrenching lyrics and stellar production, is that Bridgers can only go up from here. She’s shown listeners how much her sound can evolve and how much it can evolve further.