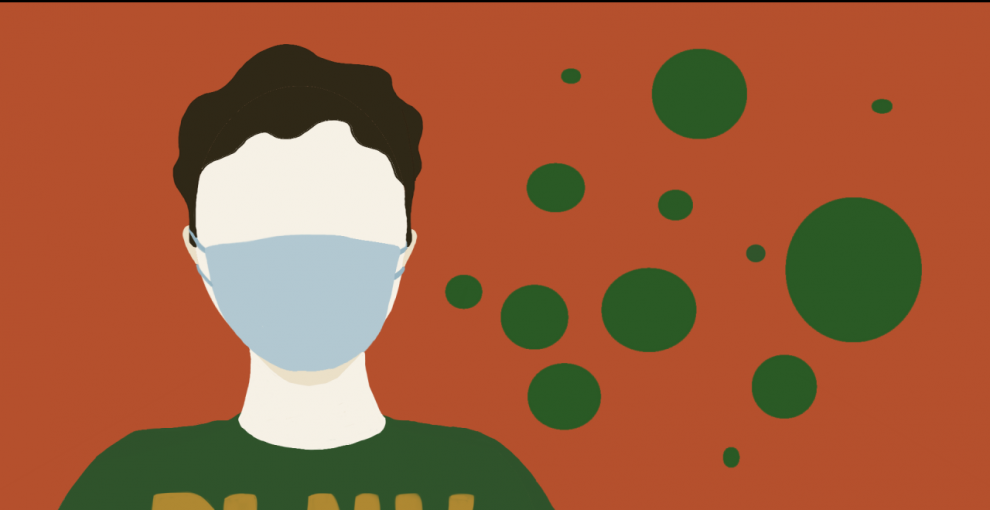 Auggie Lam woke up on a Monday morning to an email stating he tested positive for COVID-19.

Lam, a first-year mechanical engineering major, said, “I immediately contacted every person I had been in contact with for the past week.”

Ashley Portillo, a first-year psychology major, awoke to a screenshot of the email confirming Auggie’s positive result at 7:30 a.m on Monday, which Lam had sent in a group chat.

“Auggie is a funny person so I was waiting for the ‘Psych! Gotcha!,’” she said. “[My friends and I] didn’t know how to respond. We just stood there with our phones. He was in all of our rooms; he was around us all the time. I hugged him. We were just in shock.”

Portillo, Lam and their friend group were among the first wave of COVID-19 cases on campus, among which only Lam and one other tested positive.

Five weeks later, beginning October 13, students were notified via the Wellness Center that there were multiple cases of COVID-19 in Klassen, Hendricks and Young Hall. PLNU has nine active cases on campus and 68 students in isolation at the time of publication.

A school-wide email from PLNU President Bob Brower stated, “As of 9 p.m. tonight [Friday Oct. 16] we have received 72% of these test results, with only 5 positive tests…Aside from the results received tonight, we currently have 23 active student cases, with 17 of those on campus.”

“It has become clear that this rise in cases can be tied to the decisions of a few individuals to engage in risky behaviors and also to delay reporting of symptoms,” Brower said in the email. “Although it may be stressful, a student with a positive test does not mean a student is in trouble.”

Lam was in quarantine the first week of students living on campus. According to him, the timing was one of the most unfortunate aspects of his experience.

“At first, quarantine was a bit tough because it was the first week on campus,” Lam said. “I was excited to do all these activities and then it was just cut short.”

He mentioned his main concern was not for himself, but for his peers.

Portillo said, “If anything, I was more upset that there was so much stigma around him catching it because I feel like people were judging him and thinking that he failed or something, but that really wasn’t on him.”

Upon receiving the news, Portillo explained how an RA scheduled her an immediate appointment at the Wellness Center, where they tested her for COVID-19 and checked her vitals.

“They had us tested and the nurses were amazing,” Portillo said. “They were very reassuring and calming. They prayed over us and gave us instructions [to] stay in our rooms, but that we could go to the bathroom and that’s about it. In an email, they sent a whole packet of pages [explaining everything]. Even for [questions about] laundry they told us who to contact. It was very organized.”

Lam said he thought PLNU handled the entire situation well — cracking down, investigating and contacting students who tested positive — all within a timely and appropriate manner.

“It shows how much they care for the students on campus,” Lam said. “They were more than generous when offering me resources to make sure that I was physically and mentally healthy.”

The only hiccup, he mentioned, was when they missed a meal delivery.

“They did make up for it by giving me a $30 giftcard to Grubhub,” he said.

Lam had to quarantine for two weeks due to contracting the virus, yet he continued to live out his college experience to the best of his abilities.

“Quarantine helped me have more time to work on school and study for midterms,” Lam said. “I would work out in order to stay fit, and thankfully my social life was not greatly impacted. I communicated with friends through Zoom, Facetime and Discord.”

He also mentioned that his mental health was not greatly affected.

“Staying in touch with friends really helped, as well as staying motivated,” Lam said. “I looked at the whole experience positively, and looked forward to the end of being quarantined. Most of the time, music helped me out, specifically [the band] The Score.”

Portillo, on the other hand, only quarantined for about six days, but she described detrimental effects on her academic performance.

“I gave up on work for basically the whole week,” Portillo said. “I tried my very best to communicate with teachers and they were pretty understanding. I just gave up.”

“I totally dissociated,” she said. “My brain just escaped my body. I was not mentally present. It dragged on; I couldn’t tell the difference of time anymore. My motivation tanked. It was so bad.”

“The most I could do was listen to worship music, taking it one day at a time and trying not to stress myself out by beating myself up,” Portillo said. “There was a point where I was really not doing great and was just trying to get to the next day.”

After his time in isolation, Lam continues to value the necessary precautions to prevent COVID-19 as equally as before being quarantined.

“I did not infect a single person, which shows that wearing a mask, washing hands, and socially distancing really helps [prevent the spread].”

Portillo emphasized how she now sympathizes with COVID scares.

“Initially, I would have thought that this would have changed how I see COVID, but it really did the opposite. . .[because] it didn’t seem to impact our age group as much. [Isolation] validated that [the impact] is real [for] people that are more at risk.”

“I can’t even explain how I felt being released from quarantine,” Lam said. “Experiencing campus like how I did before I got COVID. The night I got released, I went out at midnight to the cliffs to just chill with my music. It felt so good.”

Portillo shared, “Because I was so not mentally present, it felt dreamlike. I can’t even say if it felt like forever or short because it just felt like it didn’t even happen now.”

Once she was released, she hugged her friends who had also been in isolation. They returned to hitting up Point Loma’s restaurants and enjoying college life.