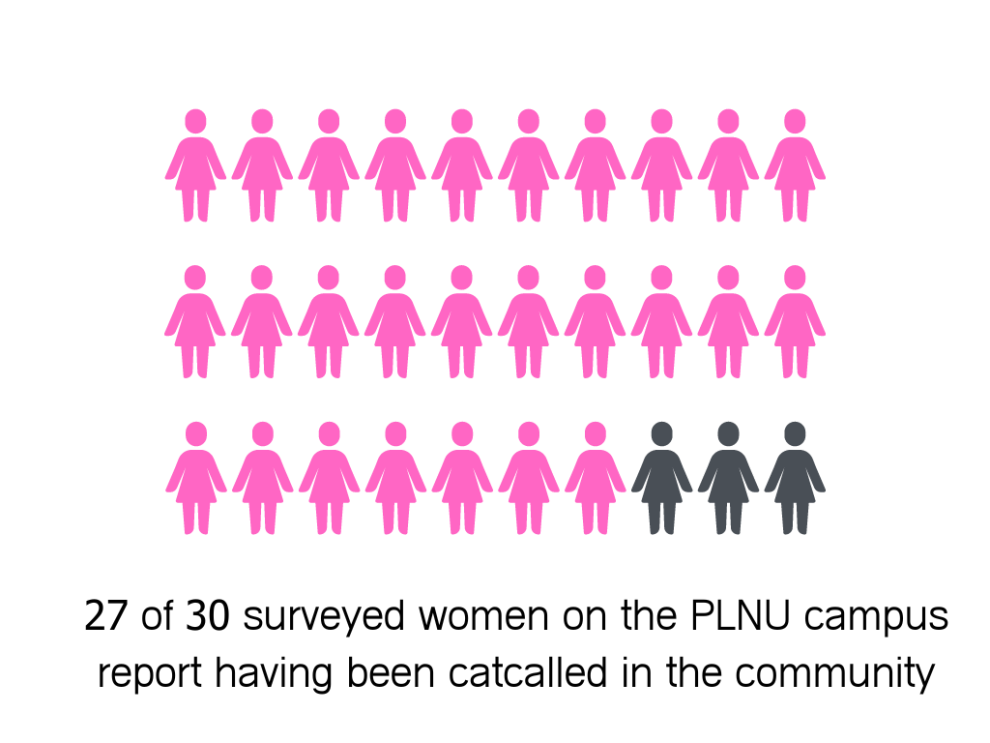 For most women at some point in their lives, they will be catcalled.  In fact, 88% of women have been sexually harrassed in the United States, according to Stop the Street Harrassment, an organization focused on stopping gender-based harassment. The Merriam Webster Dictionary defines catcalling as the act of shouting, harassing, and often sexually suggestive comments toward someone publicly.

Linda Beail, a professor of political science at PLNU says that catcalling is sexually objectifying and a judgement on women’s roles.

“[Catcalling] is done in this really specific way of putting us back in our place,” Beail says, “ ‘You’re meant for your reproductive capacity, or your sexual availibility, your appearance, so let me just remind you as you’re walking down the street that this is the way the world is seeing you and that is the slot you fit into.’”

For Beail, catcalling is dangerous because it makes women feel judged on a specific criteria- their attractiveness and appeal. This creates a world that is neither safe nor free for women, as most individuals are “slammed” into a box just because of their sexuality. This is dehumanizing, Beail said, because it is an automatic judge on appearance, not character.

This act can be seen as “othering” women and putting them into a specific and one-dimensional group.

Beail said that she hopes on campus and universally, a push will be made to create communities where people are not lumped together into groups and objectified because of gender, race, and religion, but are able to understand one another.

An argument can be made that catcalling is nothing more than complimenting. The difference between a stranger paying someone a compliment and a stranger catcalling someone is motive, tone and even age. A man double a woman’s age yelling something across the street in a ridiculing tone is far from complimentary. It is rude, predatorial and even scary. And while catcalling is not just an issue for women and feminine presenting individuals, it is primarily women who are constantly publicly harassed. This conversation can lead into larger conversations about women’s safety and equality, but it is also important to focus on the uncomfortable situations that catcalling creates.

Even at a small private Christian school like Point Loma Nazarene University, there are issues with catcalling. The school size, location and values all help create a false sense of security on campus, according to some female students. PLNU is only a short drive away from downtown San Diego, and it’s neighbors with Ocean Beach, two places in which have significant reports of catcalling, according to many of the female students on campus.

The Point collected some data on instances of catcalling. Thirty women attending Point Loma Nazarene University were briefly asked whether or not they have been catcalled either on campus or in the nearby San Diego area while being enrolled at PLNU. Of 30 girls, 27 have said that they have been catcalled in this community while they’ve attended this school. While this is only a fraction of the female population on campus, knowing that roughly 80% of women have experienced an act of street harassment, it is safe to estimate that these numbers are fairly representative of the rest of the school.

“We were coming back from iHop and we parked in the lower lot at Young, and this Jeep full of highschool boys comes driving by as we’re getting out [of the car] addressing us all saying ‘Hey, my friend hasn’t had his first kiss yet, you guys should help him out,’” Overton said. “And I said under my breath ‘And it’s probably not gonna happen.’”

Overton and her friend’s experience with the boys did not stop there. As they were walking from the Young Resident Hall parking lot to the gate entrance of Young, the car with the boys drove up to them again.

“They drove over to us as we were entering the gate and continued to harass us and call us awful things.” Overton said.

“[I was] definitely uncomfortable, but it also made me laugh, because I think I made them mad.”

Narissa Lane, who prefers she/they pronouns, is a fourth year sociology major who has also had experiences with catcalling on and off campus. As a working Public Safety officer at PLNU, they have even been catcalled on the job. When working at the welcome center right at the entrance to campus, Lane has had people honk and yell things as they’ve passed. Even people in positions of power and authority are subjected to this kind of manners.

Another time Lane recalled getting catcalled was still in San Diego, when she was walking her dog. Between too-long eye contact and revving the engine, this interaction made her feel uncomfortable.

“It made me want to claw my skin off my body,” said Lane.

Many instances may seem harmless or just annoying, but when men constantly subject women to this patronizing behavior, the gravity of the situation continues to build.

“I don’t think men are conscious of how their comments and actions make women feel,” Lane said, “they see us as objects and it makes us feel awful.”