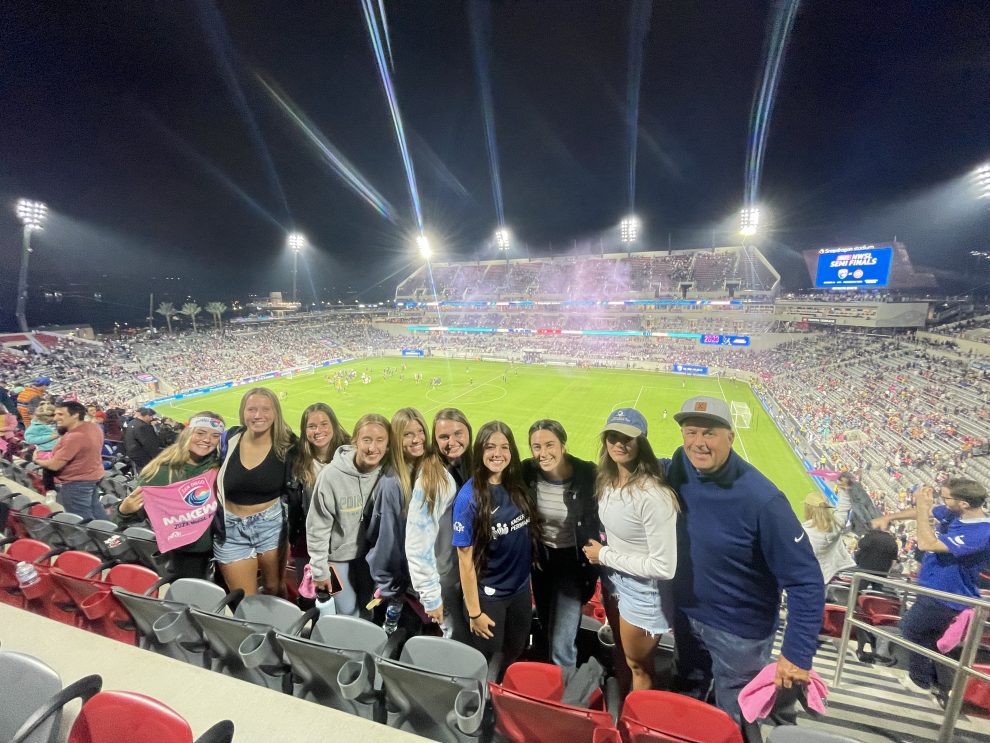 The San Diego Wave Football Club is the first National Women’s Soccer League expansion team to earn a playoff berth in its inaugural season. On Sept. 25, Wave FC overcame a two-goal deficit to achieve a 2-2 draw against the Orlando Pride, punching their ticket to the postseason with a record of 10-6-6.

The team was founded in June 2021 and began play in May 2022. Expansion teams are teams formed when a league expands its membership to satisfy an area’s demand for a local team. San Diego has not had a professional women’s soccer team since 2003, after the San Diego Spirit disbanded because the Women’s United Soccer Association folded.

Life-long soccer player, fan and fourth-year accounting major Dawson Miller reflected on this decrease of professional sports in San Diego, mentioning the Clippers’ and Chargers’ departures from the city.

“Since the Clippers leaving in 1984 and the Chargers leaving in 2017, the city of San Diego has felt a decline in the sports industry,” said Miller. “For the Wave to make the playoffs their first year, they are reminding people why we need more professional sports teams in San Diego.”

The Wave’s success has not only brought new life to San Diego’s sports scene, but with professional women’s soccer back in San Diego, girls and women in sports have new representatives.

While Wave FC has partnerships with many different organizations and charities, like Common Goal, the Chicano Federation and the Challenged Athletes Foundation’s Operation Rebound, the central focus of the San Diego Wave is advocating for girls and women in sports, so much so that it is one of the main reasons the team was built.

According to the San Diego Wave FC’s website, their origin stems from a need to “shine the spotlight on women’s sports and prove that when [they] play under the same conditions and given the right platform, [they] are able to make great things happen together.”

The Wave’s quick success has benefited this mission. The team is exhibiting what they’re preaching: women can achieve great success in sports when given the right support.

Third-year psychology major, long-time soccer player and San Diego local Ashley Portillo agrees with the statement Wave FC is proclaiming, citing personal experience. She said there were disparities between the boys’ and girls’ soccer programs at her high school in Poway.

“The school hired a coach for us that had never played soccer in his life, and the guys didn’t have to deal with that,” said Portillo. “There was such a big difference in performances between the girls and guys, and I just wonder if that would’ve been different if we had better coaches.”

“The guys definitely got more publicity. During school, students would talk about going to their games, but only girls who had friends on the girl’s team would come to our games,” said Portillo.

Publicity has been a strong suit for Wave FC this season, giving the entire NWSL a boost in popularity. In their first match at the new Snapdragon Stadium, Wave FC set an NWSL attendance record with 32,000 people. The stadium also saw 20,000 people for the Wave’s last regular season home game. These are two of the largest crowds across the entire NWSL this year.

With the growth and success of the league this season, Jessica Berman, commissioner of the NWSL, announced at the espnW Summit that communication from potential ownership groups has been “overwhelming.” The league currently comprises 12 teams; this number is expected to grow to 16 within the next several years, according to a league insider.

“Women’s professional sports is in its infancy, Wave is helping to grow the opportunity and doing it in a competitive and successful way,” said Kiely. “The more teams that find success in the NWSL the more opportunity there is for college graduates to continue playing in a professional environment.”

She also expressed her hope that the Wave’s success will continue to spur more support for women’s soccer across San Diego. “Hopefully, those that enjoy the Wave will enjoy watching more women’s soccer here in San Diego,” Kiely said. “Anytime Alex Morgan [the Wave’s star forward] wants to come support another women’s team, we have a seat for her.”