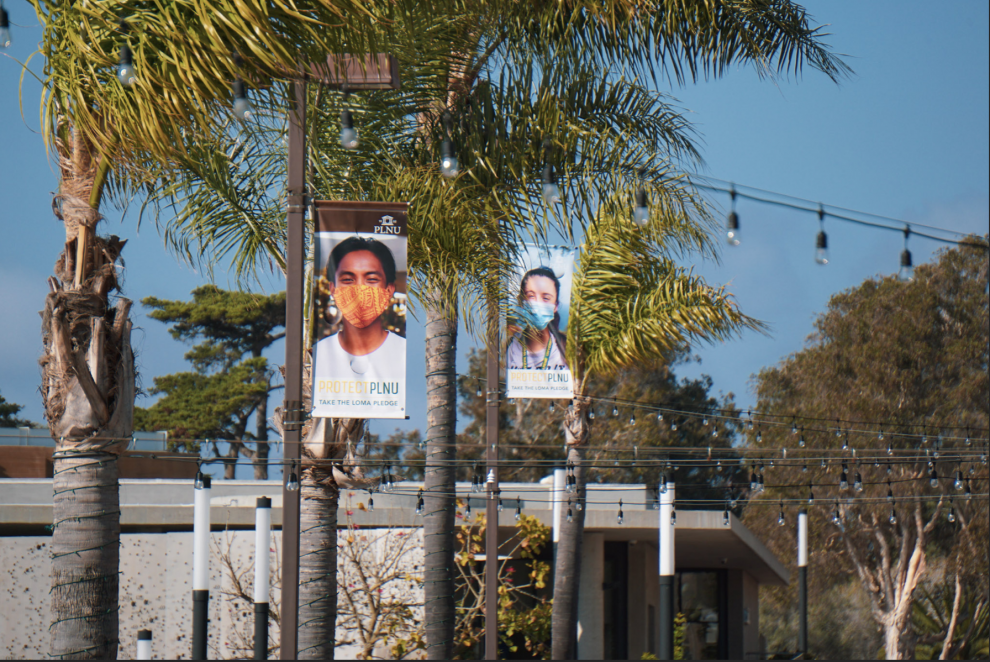 Red. It’s a color that nowadays induces feelings of freedom and a sense of normalcy. Red has been on the minds of almost everyone living on Point Loma Nazarene University’s campus for the past few days. This new obsession with the color is brought by San Diego County’s move from purple tier into the red tier of COVID-19 risk levels, according to guidelines set by the Centers for Disease Control and Prevention. PLNU students should expect to see the return of familiar campus elements along with the introduction of a few brand new components of life on campus.

One of the most noticeable changes is the re-introduction of indoor seating in the caf. Byron Zuniga, dining supervisor, said he was thrilled indoor seating would be allowed again.

“This is Loma… We were made for fellowship,” Zuniga said.

According to Zuniga, 100 people are now able to sit inside the caf and can still use the outdoor seating. But what if students want to relive the days before the pandemic and camp out in a corner booth for five hours? Those who do this may get dirty looks from others, but Zuniga said it is fine.

He explained, “Some people are going to do that, but we’re not going to turn anyone away.”

Those who dine in can now use paper plates instead of the plastic to-go containers.

Sophomore applied health major Christian Hun experienced dining inside for both breakfast and dinner on Wednesday when indoor seating opened. Hun said the experience was “refreshing, it was nice. People were talking, [there was] the sound of conversation.”

University Chaplain Esteban Trujillo said due to Brown Chapel being the largest place of gathering on campus, reopening it is still up for discussion. He described the current outdoor model for chapel as a balance of fulfilling the yearning to gather with staying within current guidelines.

“We’re trying to be wise in the way that we offer spiritual care to the entire community so that everyone can still participate,” Trujillo said.

While this pandemic has brought many undesired changes, there is one which should bring joy. Scan-ins are back, and with a new scanning machine! Trujillo confirmed that those who show up to the Wednesday morning and Thursday evening outdoor gatherings can now scan in and out to receive chapel credit. Gone are the days of standing around awkwardly waiting to get your ID cards scanned. According to Trujillo, the new scanning machines are here to stay.

“We’ve moved to a new system that we hope is more efficient and has less contact with others and offers an easy way to go in and come out. And it beeps much faster!” Trujillo said.

Following the trend of revamping old traditions, ASB Director of Activities and Marketing Colin Mowers described his excitement for Bobby B’s ½ Birthday Bash taking place this Saturday, March 20. It will happen outside and operate under purple tier guidelines, as it was planned before the move into red tier. New events are still in the works as Mowers waits for guidance from the cabinet.

“Right now it’s probably not going to look too different just because we have to be extra careful, extra safe, when we’re doing events in a bigger group,” he said.

After a weekend of celebrating, starting Monday, classes will look more normal for many students. The phrase “modified hybrid” has been thrown around since before the start of the semester and President Bob Brower confirmed that while some will take this format, for other classes it isn’t possible right now.

“We have size limits of the number of students under current conditions for each classroom, so there will be variations of what that modified hybrid looks like,” Brower said.

For classes with 30-40 students, modified hybrid can take the form of a rotation with half the students in class and the other attending virtually, the groups switching places each class day. Jill Monroe, director of public affairs, said an easy way to think of the dispersion of classes is in thirds: one-third taking place in parking garages and outdoor venues, one-third which were fully online but will switch to hybrid starting Monday and one-third will continue to operate fully remote due to faculty being at high risk or a large class size.

Monroe also said there is a possibility of San Diego County moving to the orange tier within the next few weeks.

“I think we’re going to continue to see things accelerate, partly because of vaccine distribution increase and partly due to the state’s changes in the tier structure,” Monroe said.

This change in structure means vaccination numbers may determine where a state falls within the tiers. This is what allowed San Diego to move into the red tier on Wednesday. Brower said if San Diego were to move to the orange tier, it would double indoor capacity from 25% to 50% with a maximum capacity of 200 people. Both Brower and Monroe agree that while entering the orange tier is a possibility, the county could decide to be more restrictive and force PLNU to step back from planned operations.

As long as new restrictions aren’t added, dorm life is looking at new changes. Dean of Students Jake Gilbertson said an immediate change is some student activities will take place indoors as long as everyone is masked and distanced. This applies to clubs and hall events.

“Another thing we’re looking at is to what extent we can loosen some guidelines: having a new understanding of when masks are required, can off campus visitors come into residence halls and visit?” said Gilbertson.

Gilbertson admitted even though how this will exactly play out is unknown, Residential Life is eager to say yes to as much as possible. As county numbers and testing numbers on campus improve, Gilbertson emphasized there is hope for restrictions to continue to loosen.

With all these imminent changes, Gilbertson and Trujillo expressed their gratitude toward students for helping bring back the energy the PLNU campus hasn’t seen for a year. Many faculty have stated this comes with the responsibility to continue flattening the curve to bring back the normalcy everyone craves.

“It is a constant series of movements, changes and adaptations,” Brower said, “It’s really important to keep vigilant.”