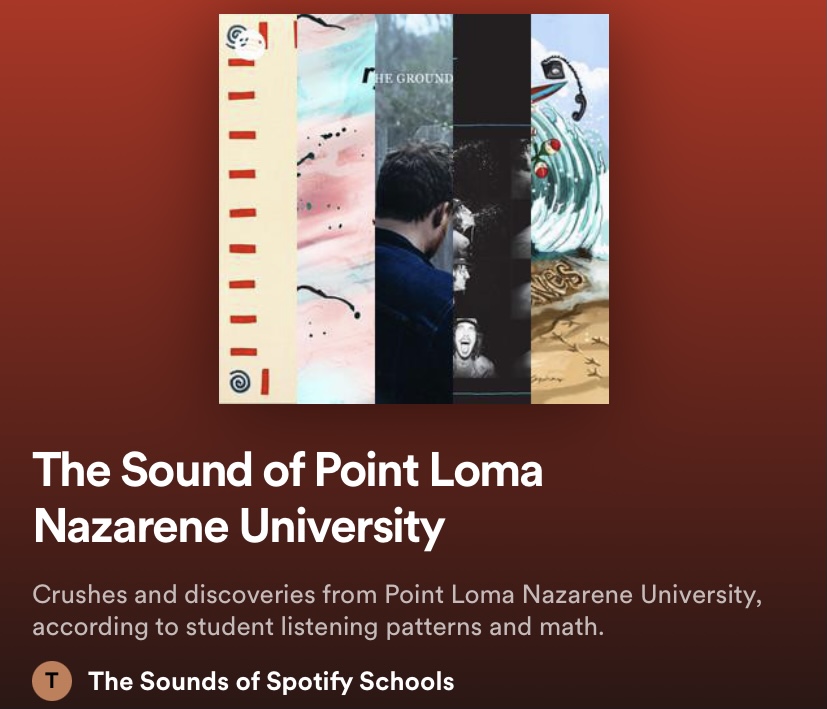 On the digital music streaming service Spotify, there is a playlist arranged for Point Loma Nazarene University that showcases what songs students are listening to. The playlist “The Sound of Point Loma Nazarene University” belongs to an account named “The Sounds of Spotify Schools.” Thanks to this playlist, students at PLNU can find the songs trending on campus all in one place.

Through Spotify’s virtual chat line, customer service advisor Emmanuel S., verified that Spotify curates the account that forms music playlists for colleges and universities through a certain algorithm. When a student indicates that they are attending college when they sign up for a Spotify account, the system then generates the listening patterns of the songs being played into a playlist.

The music students listen to while walking between classes or for background noise while doing schoolwork can be described as mellow. It splits between three different music genres: Christian, indie rock and soft pop.

The worship songs in the PLNU music mix are probably what a modern youth pastor has playing through their headphones. The track “814” by artists Isla Vista Worship and Mark Barlow is an alternative funky tune for praising God. From the rhythmic snare and synthesizing piano keys, don’t be surprised if your head starts bobbing along to the beat.

For those who prefer a more organic sound, try the acoustic rendition of the song “Nothing I Hold on to” by artist Will Reagan of the American contemporary worship band, United Pursuit. This raw performance can make the avid chapel attendant feel like they are standing in the first three rows of Brown Chapel.

For those who enjoy venturing off-campus to explore the beach cities surrounding Point Loma, the alternative-indie rock songs of the PLNU music mix are what you want to hear while driving with a hand out the window.

Through a psychedelic strum of guitar strings, “Wavy Gravy” by the band Okey Dokey can make every day feel like summer. The Nashville duo Johnny Fisher and Aaron Martin express through their hallucinating style the classic tale of a crush that has an admirer under their spell. It would be appropriate to say “Wavy Gravy” could have been played at Woodstock in 1969.

If you merge together a surfboard, a Volkswagen Camper Van and tan lines, then the band Sun Room would be the final result. Their track “Sol Del Sur” makes its own wave with high pitch guitar strings and the electronic vocals of their lead singer Luke Asgian creating tides in their artistic pursuit. Hyping up the early-rising surfers, Sun Room’s song fits in like a snug puzzle piece with other tracks on the playlist to set a chill vibe for the listener.

It’s not bubblegum pop, but the bubbly songs set on PLNU’s music mix definitely have a sweet feel. The song “friendship?” by upcoming artist Jordy Searcy levels up the cuteness as the melody details a romantic interest between two friends. It might even be an anthem to those slipping a certain ring on their friend-turned-partner’s finger this spring.

“Buttons” by artist Meija entails that their significant other knows what gears to pull to get an emotional reaction in them. “I let you push my buttons all the time,” he sings while admitting he can push his pride away with this special person. These specific melodies are a bit more computerized than other tracks on the playlist due to the beats being produced with electronic tones rather than standard instruments.

Whether it’s to help you study for exams or you need some background music, this playlist is here to listen to at any time you want. If you’re interested in listening to a few of these songs, be sure to check out “The Sound of Point Loma Nazarene University” on Spotify. Take that Apple Music listeners.