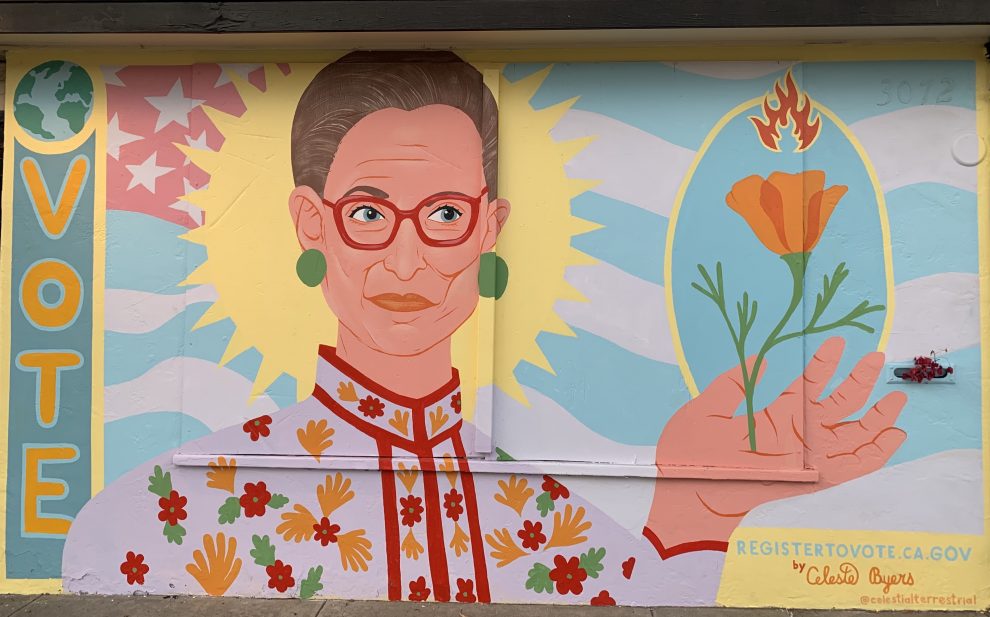 After the passing of Justice Ruth Bader Ginsburg, many looked for artistic ways to exhibit her legacy. Although her presence is gone from the court, she takes reincarnate forms in pop culture and art. Saturday Night Live and other artists represent her out of respect for what she accomplished during her lifetime.

Her nickname, the “Notorious R.B.G.” was given as a paralleled nickname for rapper Notorious B.I.G. In an interview with Stephen Colbert, she was asked “what do you have in common with him?”

Ginsburg replied, “we were both born and bred in Brooklyn, New York.”

Colbert also made the valid point they both “spit their truths.”

This facet of the late justice rings true in Kate McKinnon’s interpretation of Ginsburg on SNL. SNL is known for its goofy theatrics and far-fetched skits, but in watching some rerun scenes with McKinnon playing Ginsburg, what R.B.G. stands for still shines through. McKinnon did a rendition of “Never Gonna Give You Up” by Rick Astley singing, “never gonna give you up, never gonna let you down, never gonna turn around and RETIRE.”

Ginsburg’s devotion to the country and the courts defines her, and in reality, her health was the only thing that could stop her.

In the 2018 CNN film, “RBG,” the topic of young adults actively learning and becoming involved in their rights was derived from Ginsburg’s dissent in the case Shelby County v. Holder. This court ruled that Section 4 of the Voting Rights Act is unconstitutional because it requires preclearance for voting plans, which is said to be dated and inapplicable for today’s voting system. However, after the announcement of the ruling, Ginsburg addressed dissenters in a Time article. She said, “throwing out preclearance when it has worked and is continuing to work to stop discriminatory changes is like throwing away your umbrella in a rainstorm because you are not getting wet.”

This statement reminded minority voters and new voters alike that they must exercise their rights, as the abolishment of preclearance could produce dire consequences.

Writer Amina Sow and media strategist Frank Chi were a couple of people who acted in response to Ginsburg’s dissent. They shared their first steps of integrating R.B.G. into art during the same CNN film “RBG.” Chi said, “[Ginsburg’s] dissent was the introduction for many young people about how important the court is for everyday lives.”

Chi created art that revolved around R.B.G. and Sow formulated the slogan “you can’t spell truth without Ruth.” These different media showed one common phenomenon described by Sow: “Young people are really craving different kinds of icons. Realizing that somebody like R.B.G. has been doing her job for decades and being forceful and speaking truths to power kind of blows my mind.”

Another place we see R.B.G. is quite close to home. If you head to Folk Arts Rare Records on El Cajon Boulevard in North Park, the front half of their shop displays a mural of R.B.G. On the Thursday before her passing, the windows of the store were shot and shattered with a bb gun. After the incident, the window was boarded up and left blank. Scott Johnston, an employee at Folk Arts Rare Records, recounted the event saying, “It was a s***y week. [Ginsburg] passed away a week after the incident.”

So, owner Brendan Boyle and artist Celeste Byers collaborated to make this wall a memorial for the notorious R.B.G. Boyle said the mural should “inspire us to fight for what is right with strength, perseverance and intelligence.”

Byers shared that in addition to encompassing what R.B.G. stood for, she wanted to encourage diversity and voting.

“I am half Chinese and wanted to represent different cultures within this American image since so many of us are immigrants,” Byers said. “We wanted the main message to be a tribute to R.B.G. and to inspire people to vote.”

Ruth Bader Ginsburg will live on through the historic progress she made for gender equality. She will be seen and remembered in the acting of Kate McKinnon, in the art and words of Sow and Chi and in the mural at Folk Arts Rare Records. As Byers put it, “I definitely believe art can capture the essence of a person, deceased or living. To me the most satisfying part of drawing or painting portraits is capturing someone’s essence.”

“Savage Mode 2”: The Next Trap Classic
“Tickets to my Downfall”: A First-Class Seat into the Garbage