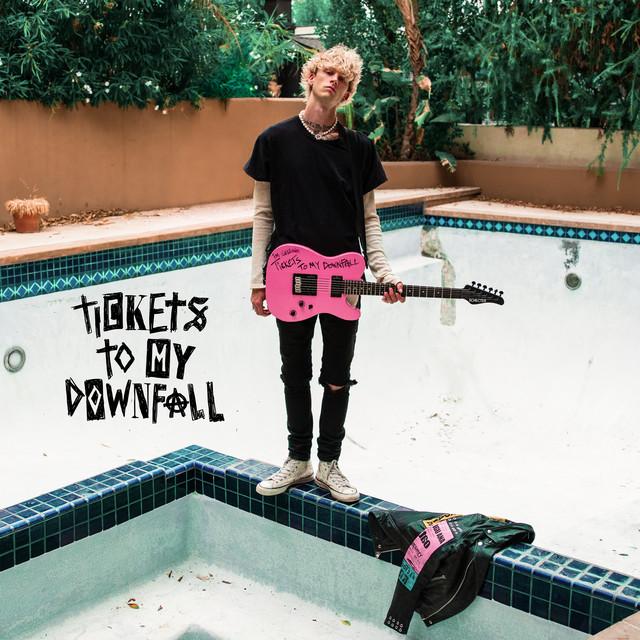 With some of the most forgettable lyrics and a vocal performance that lacked any personality or distinction, Machine Gun Kelly’s new album “Tickets to my Downfall” might be the mostly appropriately titled album of the year as well as the worst.

In 2018, no one expected MGK to write a diss track on Eminem, but no one could have guessed Eminem would write a response track so fire it would destroy MGK’s rap career and his man bun. Forced to leave the rap game, MGK turned to pop punk and proved he is just as incompetent at pop punk as he is at hip hop.

To start with something positive, I admit the instrumentals are not bad. The production is bland and unimaginative, but the repeating 3-power chord patterns, the drumming by Travis Barker and the epic choruses are reminiscent of Blink 182 and Fall Out Boys’ glory days, evoking memories of the music you’d hear at Hot Topic in 2008. Unfortunately for MGK, it’s no longer 2008 and no one wants to hear him sing about how much pot he smokes or how much he misses his girlfriend.

The best part of the album is the track “forget me too” when MGK finally shuts his mouth and lets Halsey have a feature. Her passionate performance, while weak in lyrical substance, has much more personality and drive, which matched with Travis Barker’s style makes me wish Halsey would try her hand at pop punk. While MGK’s performance felt derivative and bland, Halsey felt both inspired and fueled by pop punk while still adding some personal style.

Probably the most annoying part about the album is the constant intrusion of MGK talking. I found myself skipping tracks just because he won’t STOP TALKING. He’s always adding snippets of himself commenting on the mic or random in-studio conversations at the end of songs that have nothing to do with the track. It becomes annoying and distracting. He even has an interlude that is just him on the phone with Lil Peep talking about alien names while he’s coming down off mushrooms.

MGK’s inability to produce a competent record or any kind of creative or imaginative work makes evident that none of these substances are helping him be inspired or artistic and he’s just a junk-head poser. The only lyrics I can remember from this album are the constant unnecessary swear words and the classic “Na-Na-Nas” he ripped off of Mark Hoppus and Tom Delonge. His incoherent complaining reminds me of the angsty kid with an electric guitar we all knew in high school that would brag about being an alcoholic because he had a shot of vodka one time.

To sum up my thoughts, this album makes me wish Machine Gun Kelly would please go away and leave everyone alone. Eminem was right to mock his obvious lack of talent, and never had to scrape the bottom of the barrel for insults, because the barrel is a trash can and it’s overflowing with Machine Gun Kelly’s music catalogue.

Go To Work, Praise God, and Let Peggy Blow Out Your Speakers

Eternals: An Eternity of Entertaining Confusion

Go To Work, Praise God, and Let Peggy Blow Out Your Speakers

Eternals: An Eternity of Entertaining Confusion

“Here’s To The Journey” -Bachelorette Season 18 Is Here