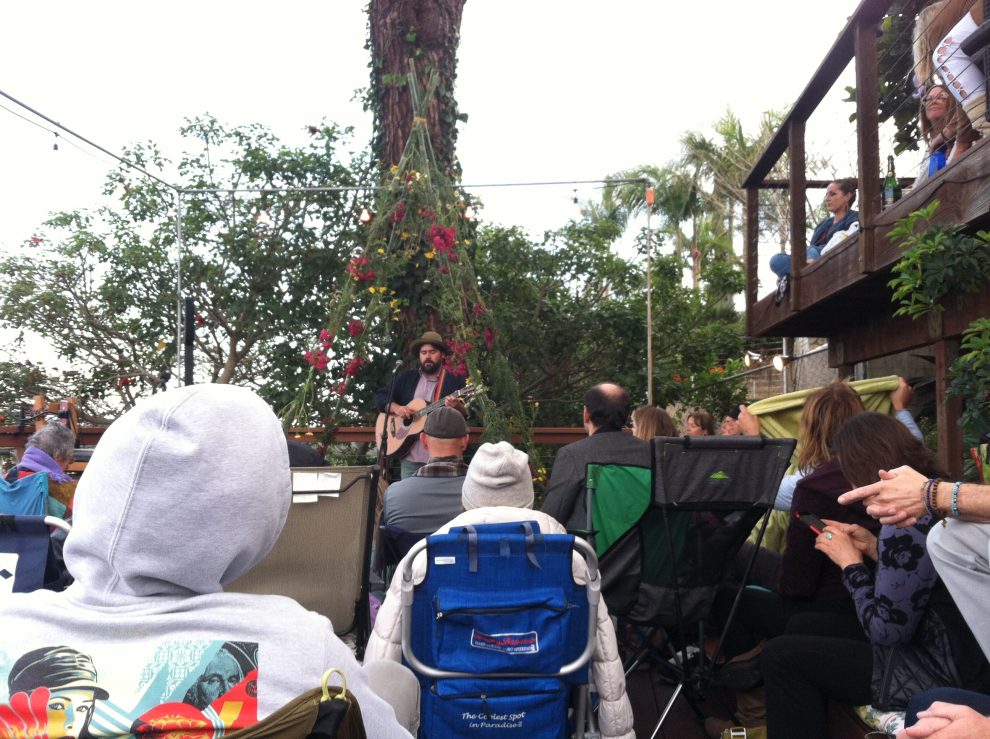 Until the Covid-19 pandemic, Zwicker’s “Speak Easy” was an annual event she created to promote and host local artists. Surrounded on all sides by a fluorescent verdure and canopied by a tall Torrey Pine, Zwicker has created a cozy and comfortable sanctuary of a venue – for anyone who can get wind of the low-key event – to enjoy local music.

“We’re in church!” wailed a man clad in white, as Jesus Gonzalez, a singer/songwriter from San Diego took the stage. “Meshell’s Neighborhood Speak Easy” hosted Gonzalez on Saturday March 19, to coincide with the forthcoming Spring Equinox.

What started as a way to keep weeds from growing, turned into a deck, which quickly turned into a recital space for her Speak Easy series. “Singer/Songwriters are the messengers” Zwicker said, “music helps me feel my voice, makes me want to say more, and speak up. [For these artists] I want to be a catalyst for ideas, expression and self-actualization.”

Greg Betts, an experienced frequenter of Zwicker’s shows, stated that Gonzalez “wasn’t just another musician” and that this audience better be ready for something unique.

Gonzalez was greeted with immediate, respectful silence by the quirky crowd of 50 New-Age hippies and 20-something year old hipsters; the kind of eccentric bunch to wear paint brushes as hair pins and thrifted crochet blankets as ponchos.

The stage was adorned with a 12- foot tall flower-pyramid Gonzalez brought from home, and the smell of aromatic incense lingered in the air. The show began with a tantric breathing exercise, and instead of applause, Gonzalez was exalted with “celestial sounds” created by the audience; a collection of whistles, moans, and ululating.

Entering with his guitar and a smile, Gonzalez took the stage with a green, felt bucket-hat and a beech-stained guitar adorned with a turquoise fringe along its edges and a rainbow printed strap hanging it around his shoulders.

Like the soft crunching of leaves, the sound of audience members cracking open kombucha cans and munching on pita chips and hummus, pierced the gentle silence as they eagerly waited for him to begin. Gonzalez greeted them with a soft-spoken welcome, before beginning his first song.

At a tone hanging right above the edge of a whisper, Gonzalez began to build layers of his voice, one on top of the other, using a loop pedal, that soon turned his lone croon into a ghostly choir of echoing oohs and aahs; the air resonated with the endless floating of his bass-laced timbre and airy falsettos.

Launching into extraterrestrial guitar melodies and rustic, reverberating chords, Gonzalez was like a one-man Pink Floyd, combining elements of psychedelic rock with the woodsy, folk instrumentation of a man recently lost in the woods. He accompanied his guitar playing with a myriad of obscure instruments such as a steel tongue drum, a wood flute, and a pocket-size bell drum.

His lyrics were adorned with images of pastoral landscapes and flowery fields, frequently painting scenes of natural serenity accompanied by grass-trod storytelling. As if summoning the power of nature, when he sang, “strawberry moon behind periwinkle skies/ golden sunrise so familiar/ I swear I see it in your eyes” the breeze seemed to come to life as it rushed up the canyon; when the air brushed the leaves around us, it was as if the wind was accompanying him in sublime, rhythmic harmony.

And like the rising wind, Gonzalez’s layering of voices and instrumental melodies grew into a subtle building tide, that before you realized it, would erupt into a billowing tempest of colorful layers and polytonal dissonance, the intensity only realized when it was all cut with a jerking silence.

The nuance of his tone and the reverential silence he incorporated into his sound created a divine refuge for the ears. On one instance, a plane flew over the show, and the disturbing sound of the engine piercing the tranquility of the venue, elicited a unanimous feeling of perversion from the crowd, reacting in disgust to the unholiness emanating from the dark-plumed trail of the flying machine. Gonzalez was unperturbed by the interruption and the chakra of the audience returned to its placid balance as the show continued.

Jesse Greenfield, who met Gonzalez at a party, has been to several of his shows in a variety of settings. Greenfield has been drawn to his shows over-and-over again due to what they conceive as Gonzalez’s “genuine sentimentality” that veers near, but never drifts into, the realm of saccharine.

“Hearing this message of unconditional love is so refreshing, to hear those words spoken out loud is so powerful. You can tell he’s being so genuine, so authentic,” they said. “It’s as if he melted all of my organs down, they’d been removed from my body, reformed, then he scrubbed them clean and he said, ‘Here you go! Here are your organs to put back in your body!’ and I felt better.”

Following an hour of music was a 30-minute intermission in which Zwicker had prepared a ceremony to celebrate the Spring Equinox and the passing of the full moon. Zwicker, a self-titled “fire-starter coach and catalyst” led a group session of guided meditation and tantric humming, while members of the audience were invited to throw handfuls of sunflower seeds off of her balcony and into the canyon.

The event concluded with another performance by Gonzalez that consisted primarily of lyrically reliant songs without the dependant use of layers and effects; it resulted in a warm, cathartic hour of music to round out the night.

While many members of the audience spent the hour reclined in their seats with their eyes closed, a mass of women, adorned in layers of silken blankets and hanging beads, migrated to the edge of the balcony to dance and flow together; their arms waving like seaweed, and their heads nodding back and forth to the gentle strings humming from the guitar on stage.

Interspersed among the songs, Gonzalez told stories that revealed some of the secrets behind his songwriting and also demonstrated his quirky character and unabashed disposition, “I’d like to thank my mom for birthing me. I wasn’t easy, I was a C-section. Anyone else here a C-section? Y’all ever raised your hand at a show for that question before?”

After his final song, Gonzalez held a short Q&A with the audience and shared some insight into his journey as a performing artist, as well as some of his philosophy on music, “The great thing about music is that once you write a song about someone, it becomes about everyone.”

Gonzalez is currently performing every Sunday from 12pm to 2pm at The Template in Ocean Beach, and Zwicker is continuing to host more shows in her backyard; at least, until the neighbors call the cops. 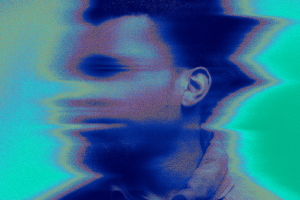 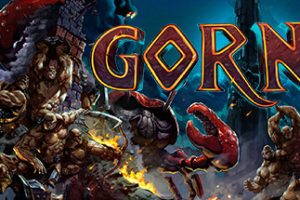