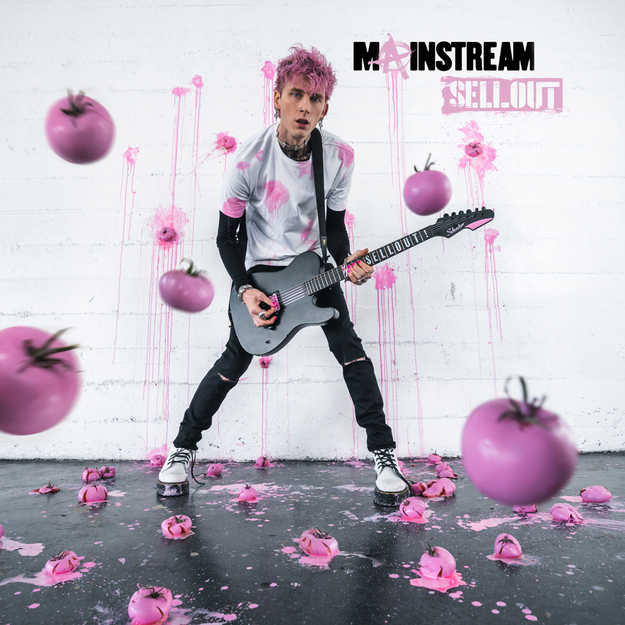 “I am sad.” Machine Gun Kelly says it countless times on his new album, “Mainstream Sellout” and yet, despite how many times he says it, it doesn’t capture the emotions I feel when listening to his album. Cynical? Nauseated? Nostalgic? Masochistic??? Or, “Excuse me custodian, can I borrow your bleach? I need something to pour down my ear holes.”

“Mainstream Sellout” is an unironic work of garbage that pretends to be a genre it’s not, so as to sell to the lowest common denominator. MGK makes music that identifies most with brain dead high schoolers abusing Xanax, because that’s the life stage where he sounds to have stopped developing.

“Oh hey Tony, that’s really mean, spoiled rich people have feelings too!” If that’s true, then MGK’s discography hasn’t convinced me. His inability to express any genuine feelings is evident in his lack of creative lyricism and his reliance on pop-punk tropes and mainstream manifestations of what emo-culture is, popularized by a commercial image promoted by Hot Topic. MGK was probably the guy who bullied the emo kids in high school, and now he’s appropriating their music.

The first track “born with horns,” opens up with a recognizable Travis Barker drum beat; the overcompressed snare drum that sounds inseparable from the toms, creates a disgusting wall of lifeless sound that resembles banging on cardboard.

MGK immediately establishes a narrative of martyrdom, which is prevalent throughout the rest of the album, “ Yeah, I’d rather be a freak than somebody’s puppet/ Release your leash, I don’t belong in the circus/ They cut each my wings soon as my name was in cursive/ Now I’m six feet deep, I guess my life wasn’t perfect.”

Six feet deep? Really? Six feet deep in Benjamins maybe, but if you think you’re drowning, then you need a reality check because a lot of people are drowning in high gas prices right now, unable to go to work. I don’t think that’s something you’re worrying about.

The only thing interrupting his self-absorbed lyrics are his weak attempts to use screamo techniques (that he has to cover with high pass filters to hide the exuberant amount of compression and autotune needed to make it sound passable), and the unintelligible moaning he tries to pass off as harmonizing.

“born with horns” is followed by “god save me,” a song with almost the exact same chord progression, song structure and vocal melody. This lack of variety is a consistent problem throughout the album. Because most of the songs are relying on such a shallow perception of pop-punk, they’re trapped into following the same formulas and get too repetitive.

It also makes a lot of the songs start to sound like filler to pad out the run time. On “Enema of the State” Blink 182 was able to produce an entire album with nine out of ten songs using the same chord progression, singing about aliens and prank calls, and they still avoided sounding banal or whiny. That’s because they had what MGK doesn’t: talent.

I mention Blink-182 because there’s so much of this album that attempts to rip them off; MGK might be doing it in homage but it fails. In “god save me” MGK too recognizably copies Tom Delonge’s signature singing style, of being too drunk to enunciate and leaning into the hard pronouncement of vowels. It’s too recognizable to ignore.

And then on “emo girl,” the feature by Willow Smith, (spelled as WILLOW in some attempt to be artsy, but really just imitating GRIMES), sings “holy f—, I’m bleeding on your Blink tee.” This is another reference to the Hot Topic consumerism these two are conflating with pop-punk culture, but also, what do these lyrics mean?

Nothing in the previous lyrics suggest anything having to do with bleeding and neither do the following lyrics, so that leads me to believe they wanted to reference the Blink shirt, but didn’t know how, so they just threw in a line about bleeding because it rhymed with the previous lyrics.

Originally, it was demoralizing to see that Travis Barker of Blink-182, a pop-punk icon, would be producing and playing drums for someone so antithetical to pop-punk; but looking at Blink-182’s recent output, it’s not as surprising.

Just like his previous album “Tickets to my Downfall,” MGK flexes his celebrity cred by including the voice of Pete “Skete” Davidson on the “wall of fame interlude” and Megan Fox on “drug dealer.”

To double down on a lack of awareness of his privilege, on the song “die in california” he complains, “I have a house in the hills and I hate it.” Yeah, keep flexing that you don’t appreciate your wealth, that’s sure to please your fans.

The album ends with my least favorite song, “twin flame.” Opening with a lazy riff that every kid with a guitar has come up with at one point or another, it eventually leads to a grainy phone call with his fiancee, Megan Fox, where he pleads with her, “to run away” and she apathetically replies “Ok, I love you” and hangs up. You can hear the conversation edited halfway through, so either there was nothing interesting in that conversation so they cut it out, or the call was fabricated.

The song then shifts into what is meant to be an explosive finale of power chords, drum riffs, and guitar solo, but it sounds so shiny and compressed it becomes a wall of unrecognizable sound, and not in a Death Grips screaming-in-your-face kind of way, but in a blown-out, melodramatic, overproduced kind of way. All-in-all its a very lackluster ending and puts a wet blanket down on an already wet bed of an album.

I wonder if MGK understands the irony in trying to be ironic about being a “Mainstream Sellout.” He’s created this narrative where he’s a victim for being a sellout, but he’s always been in the mainstream or a cash-grab from the beginning. He appropriated hip hop, spat at Eminem, Eminem then took him to school, and now he has chosen to appropriate pop-punk.

Pop-punk is derived from a specific place. It’s a product of its time; primarily white, lower-middle class teenagers in the late 90’s and early 2000’s, who were born in the dystopian boredom of suburban america, who’s only option to get out of their lives of consumer-driven, neoliberal banality was to scream and shout about their lack of a will to live.

The struggle expressed by these suburban high schoolers spoke to a wider aspect of the human condition. Tom Petty sings about it in “Free Fallin,” Springsteen in “Born to Run;” their expression is different but the form, its essence, remains the same. Feeling trapped in a society that doesn’t understand you, finding death or art to be the only escape from stifling conformity, and choosing running away to be the only escape from the destiny of everyone else around you.

MGK singing about “being f—-ed up, God hates me, I’m so emo” is a surface level attempt at emo music. Emo musicians never said they were emo, they were labeled that way. Being emo, or pop-punk is not a fashion statement or a style, it’s an expression of an era.

My complacency is probably in vain because what’s evident from the music is that MGK’s intended audience is not the pop-punk fanbase. It’s the girls behind me in World Cinema who won’t stop whispering how hot he is while Dr. Wicks explains diegetic sound. Ladies, YOUR diegetic sound is distracting, please listen to better music.

I feel like I’ve only scratched the surface of what a terrible album this is, but if I kept going, we’d need to spill over into the Sports, Features, and Opinions sections. I didn’t think it was possible for MGK to make an album WORSE than “Tickets to my Downfall,” but let me be clear, that doesn’t make “Tickets to my Downfall” any better. It cements the point that MGK needs to crawl back into whatever dumpster he came out of, and that the abuse of pop-punk, emo, and most importantly, my ears, needs to stop.

Hidden Within The Hipsters: Jesus Gonzalez
Elden Ring: Perspective from a Souls Veteran