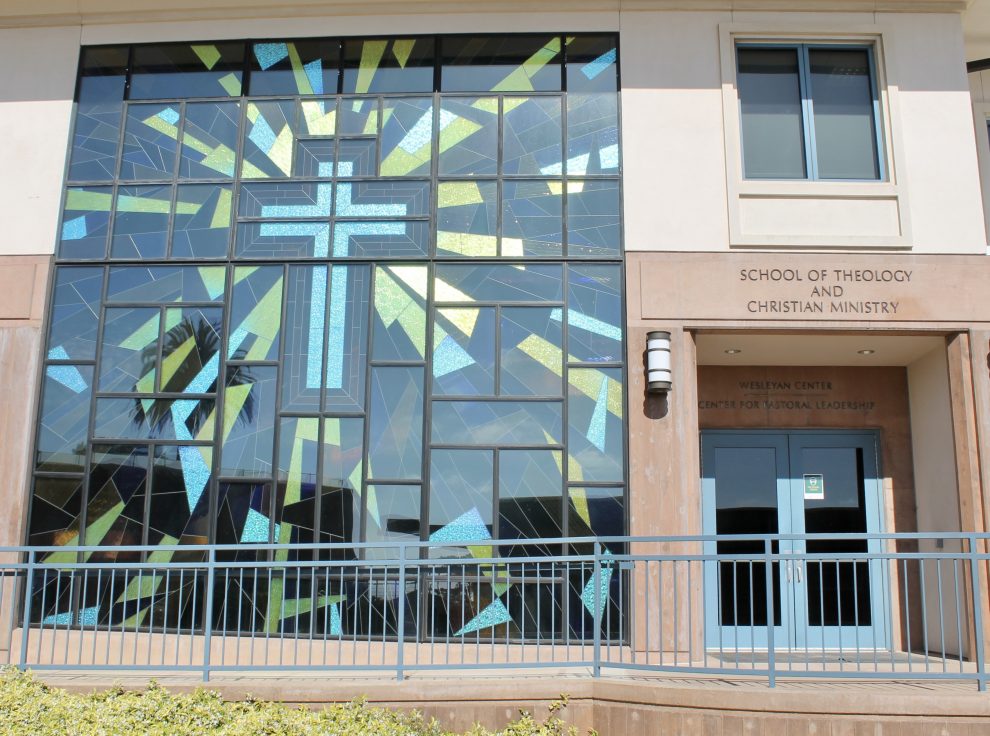 Many universities who are affiliated with the Christian faith and other faiths require students to take religion courses as general education requirements. At PLNU, students are required to take two biblical foundation courses and one Christian tradition course, but are given the option to take a course on world religions.

PLNU is a part of the Nazarene Church, an international Protestant denomination. The excerpt below further explains the mission of the school’s religious affiliation and can be found on PLNU’s website: “Since PLNU is a Nazarene university, our relationship with the Church of the Nazarene is one characterized by a mutual commitment to the doctrine and mission. That means we strive to prepare leaders for Christian service within social, civic, business and church communities.”

Although the title of Nazarene classifies the beliefs and teachings of the school, more than 45 denominations are represented at PLNU. Additionally, there are students who do not identify with the Christian faith or are of faith at all.

Sophomore dietetics major Rachel Whittington grew up in a very religious background, but in the past year she said she struggled with her perception of modern Christianity. Having not heard of the world religions course, she expressed interest for herself and other students who may be in her shoes.

Mark Maddix, dean of the school of theology, and Michael Lodahl, professor of theology and world religions, further explained PLNU’s emphasis on teaching Christian courses. Maddix said PLNU began as a Nazarene institution to prepare people for ministry and it later broadened into a liberal arts education.

“We find our roots in the church of the Nazarene in what we call the Wesleyan-Holiness tradition. While that is the case, we recognize that students who come here and faculty that work here are from a wide range of a broader Christian tradition,” Maddix said.

Maddix explained that to be a student at PLNU, you do not have to sign a confession of faith that you are a Christian, but you are aware you are getting an education in a Christian environment.

While the school of theology holds true to the Wesleyan-Holiness tradition, it also offers courses examining some of the world’s religions.

“As we say in Wesleyan tradition, it is important for us to respect people who have different religious beliefs than us, even if we do not agree with them,” Maddix said. “It also helps us to see there are a lot of things we share in common even though we have our own distinctives.”

Maddix said since students have to take three foundational exploration (general education) classes from the school of theology, they felt that it would be best for students to take a class from a Christian perspective instead of a world religions class. Maddix encourages students who have space in their schedules or an interest in exploring other religions to take a world religions course, which has been taught by Lodahl for more than 20 years.

Lodahl said the school was prompted to offer world religion courses due to being part of a liberal arts education. It was necessary to have some knowledge and awareness of other people’s cultures, including religious convictions and practices.

“I think what prompts any school to have a course like this is simply the recognition to love your neighbor as yourself. You need to love your neighbor intelligently, which can and should include knowing and understanding their religious traditions, convictions and practices particularly if they are quite different from yours,” Lodahl said.

Lodahl said most of his students were raised within the Christian faith. This is more than the demographic of students he taught at Northwest Nazarene University (NNU) in Nampa, Idaho 11 years ago. Lodahl recalled one of his students who practiced Hinduism at NNU.

“I remember being a bit intimidated given that we started with Hinduism in this course and I would check in with [the student] several times a class session and say ‘Am I doing it okay? I don’t want to misrepresent anything or characterize any of your beliefs,’” Lodahl said.

Maddix said PLNU professors have a strength in creating open spaces to talk about faith while holding on to Christian tradition, and they understand there are students who are not Christians.

Lodahl closed with this: “As a Christian theologian, it has always been one of the enduring concerns and commitments of my life and my vocation to try to understand my neighbor’s religion well, because I cannot love that person meaningfully and intelligently if I am an utter ignoramus about that person’s own religious upbringing and convictions and practices.”