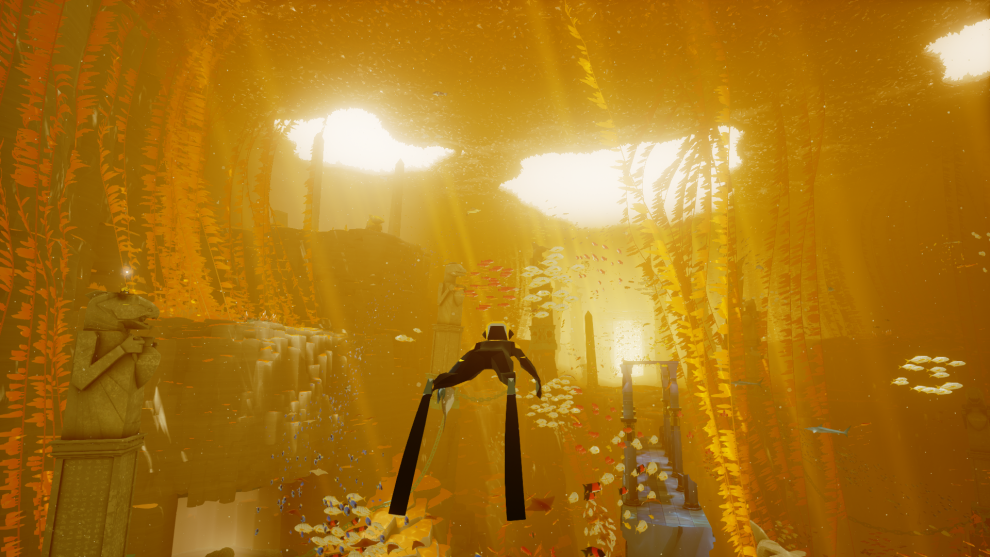 Ahh finals week, the bastion of relaxation and quality sleep. Everyone dreads it — the exhaustion, stress, panic riddled papers and having to laminate your notes so the tears roll off. Fortunately, I have a game that might help take the edge off finals week, so keep this in mind for future semesters. It’s the pinnacle of relaxation games: “Abzu.”

“Abzu” is an underwater-based narrative experience, where you play as a robotic scuba diver (presumably named Abzu) who wakes up to find a robot monster is starting to corrupt the ocean, and it’s up to you to stop it. I’ll say up front that’s the closest thing to a narrative you’ll get in this game. There are very few gameplay controls as well. You have a few buttons that make you do cool flips or swim a bit faster but that’s it.

So why do I recommend this game? It’s my go-to recommendation when I reference video games being works of art. The art style is very cartoony, with a rich color palette and cell shading, and it looks unique and detailed. The world feels lived in, with lots of plant life and rocks that make it seem like a real ecosystem. The areas hold all manner of animals too, from small fish to orcas and giant squid, which all react to each other and the environment in different ways.

The visuals are comforting and lifelike. From the way the seaweed moves with the current of the water to the way the sunlight shines through the algae, the game looks stunning and packed with detail. The music also deserves praise, as the classical melodies add to the magic of the game.

If I had to choose one thing that “Abzu” reminds me of, it’s going to SeaWorld as a kid. This isn’t just because of its ocean theme (duh) but also that feeling of awe, as if I had stepped into a magical place. That’s why I recommend “Abzu,” because if you need a quick break, it can take you out of even the most stressful situations and can reinvigorate your willingness to see the light at the end of finals.

Olivia Rodrigo’s “Sour” is Bittersweet
“Friends”: The One with the Reunion