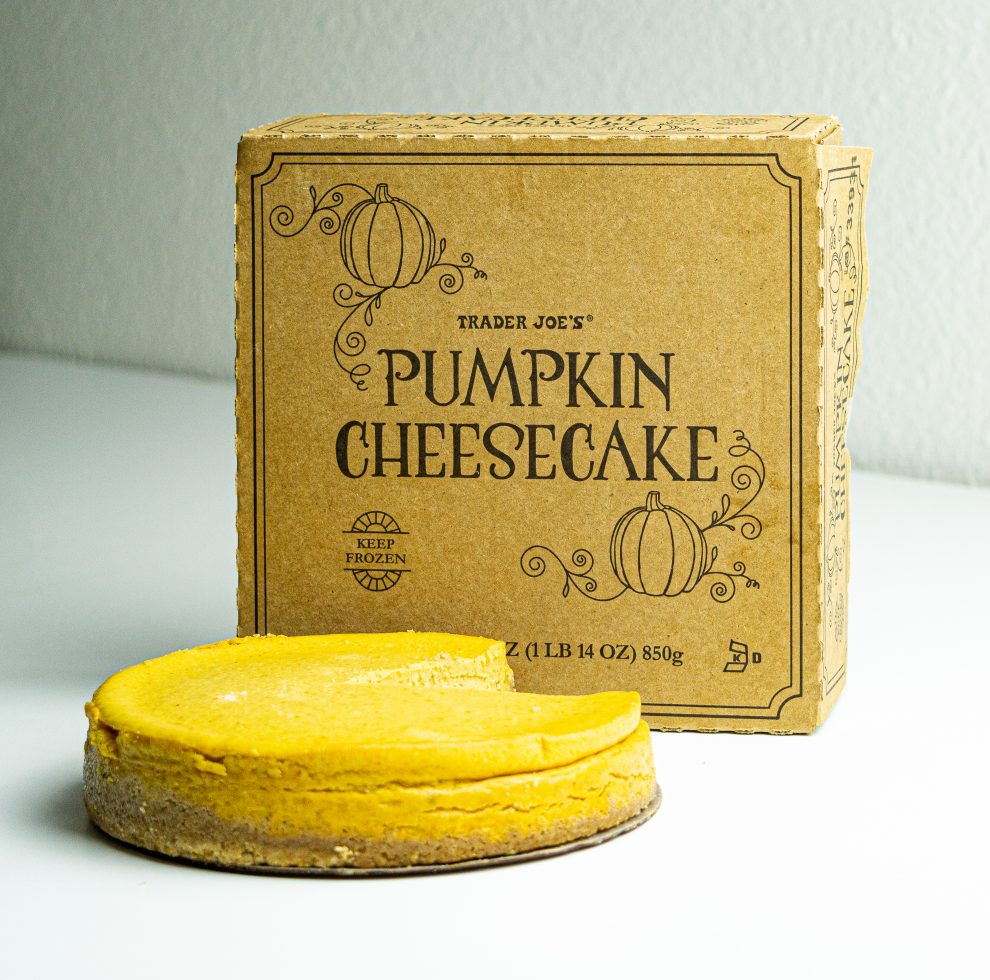 Every October, the aisles of Trader Joe’s turn into a pumpkin fantasyland. This year has been no exception. It seems “pumpkin” is written in bold letters across orange packaging on every shelf. As you may recall from the story we wrote last year, employees of the famous grocery chain told us the frenzy has little to do with a genuine love of pumpkins and everything to do with seasonal marketing strategies. The marketing is obviously effective, but the two of us are much more interested in the actual quality of the products.

Noah and I have dedicated ourselves to seeking the truth and giving an honest, unbiased review of as many Trader Joe’s pumpkin products as we could get our hands on.

Lauren O’Brien: Last year, I was very anti-pumpkin. There’s nothing wrong with the squash itself. I just know that, like the employees said, there is a marketing scheme, and I never want to give in to marketing schemes too easily. Now, I’m a little bit more neutral, and I’m willing to give these pumpkin products a fair chance.

Noah Harrel: Last year I discovered my passion for pumpkin and pumpkin spiced foods. There’s something both exciting and comforting I experienced with these foods and I believe we should be able to enjoy it year-round. Is just any dish a proper vessel for pumpkins and/or its accompanying spice? Absolutely not. But that’s part of the adventure, we do this so you don’t have to. I hope this will bring the proper attention to the pumpkin products that deserve it, and judgment and wrath to the ones that exist solely to ride the fall pumpkin craze wave.

LO: “I think I have a crush on this pumpkin.”

This changed my world. I’m a big veggie girl, not so much a sweets girl, which is maybe where my pumpkin product qualms often originate. I was happy with this experience because *finally* pumpkin got to be the star of the show. Our pumpkin had no salt, no sugar, no pumpkin puree in a can… and it was AMAZING. It’s got a lot of body. It has a simple, nutty flavor. I think this experience will forever change my future pumpkin product experiences.

This is where I have to come clean and say I’ve never actually tried just a plain baked pumpkin before now. But after doing so, I was blown away. We forget that pumpkins are just another vegetable in the squash family, this is probably because of how we’ve forcefully separated it from it’s family and plopped it firmly in the fall as its own entity. But this is a squash-like vegetable, juicy, light, tender and full of body with the slightest hint of nutty flavor. This is our baseline, but honestly after trying just pumpkin, I’m content.

For me, the spice was coming through. I think any yogurt-covered pretzel enthusiast could enjoy these petite little twists. It was pleasantly aromatic, with a good crunch and nice salty sprinklings on top. The balance between salty and sweet was nearly perfect. The one caveat of course, is that there was no actual pumpkin content — only pumpkin spice (which also lingered at the bottom of the ingredient list. The pretzels were tasty, but didn’t pack any powerful pumpkin punch.

The above quote was my first reaction. It’s a yogurt pretzel. Simple as that. Whether there’s pumpkin spice flavor is up for debate. Some pretzels have more flavor than others, but in general the spicy taste that reminded me of fall just isn’t the spotlight of this snack. It was reminiscent of a pumpkin La Croix: All the right flavors were there, it just tasted like someone accidentally added a little bit of the spice to a normal batch of yogurt pretzels and they had to rebrand just in case.

LO: “It tastes like someone spilled beans in your pumpkin pie.”

I had trouble putting this in my mouth while looking directly at the list of ingredients, which started off with beans, sugar and pumpkin puree. The thought of those three things mixing in my body was not a pleasant feeling. Needless to say, I did not enjoy my first bite… or any of the ones that followed. There was nothing in the spiciness, or the sweetness, or the beany-ness that enticed me to come back for more. I would never purchase this for myself, and if this were served at a party, I would complain to the host.

While checking out an ungodly amount of pumpkin products, the cashier informed me that this pumpkin flavored product was “really good.” Not sure who eats hummus with a spoon, but if you do I would advise against it here. It’s very spice forward, almost uncomfortably so. The pumpkin adds to the texture, but the dip begs for a chip. Once a neutral flavor like a chip is introduced the spicy flavor calms down to point where it can *almost* be enjoyed. This hummus can be a fun thing to bring to a fall themed party, but not something I imagine many people would enjoy on their own.

LO: “This is the smoothest alfredo sauce I have ever had.”

This had no pumpkin pie spice, which made the alfredo different from many of our other pumpkin experiences. The creamy nuttinest of the pumpkin squash mixed with two decadent cheeses left my mouth with this wonderfully warm, mellow feeling. I think this is one of those things that could be offered year-round. The sauce doesn’t scream, “Hello, I am the Pumpkin King!” It screams, “I am creamy, tasty, and a great base for any special meal.” I am impressed. I would easily repurchase.

NH: “If you’re trying to have a nice night and something fun in the fall, I say go for it!”

Whoever thought to put pumpkin in a sauce with cheese deserves an award. To keep the flavor profile of the sauce the spices were left out and the pumpkin adds such a smooth texture that I would argue this is better than some more traditional alfredo sauces I’ve had. And it comes in a fun orange color! I personally think this would do well any time of year. Who would have thought Trader Joe’s for a few months out of the year sells the best jarred alfredo sauce as they lean into the pumpkin gimmick?

LO: “My mouth is confused.”

This didn’t taste like normal cheesecake— there was some depth to it, but I couldn’t put my finger on what was happening in my mouth. It was oddly unfamiliar, like the old family friend you grew up with but haven’t seen in 10 years. The pumpkin puree had altered the cheesecake texture, so it didn’t melt in my mouth the way I expected it to. And the other flavors didn’t come through strong enough to convince me that there was real pumpkin in there. It left me with more questions than answers.

NH: “You don’t navigate it, it navigates you.”

Cheesecake is a very delicate food. I was excited to see if the pumpkin would elevate the already amazing food. I was sad to learn, it really didn’t. The cheesecake became very creamy but not in a good way. It kinda rolled around in my mouth and refused to break apart. The cheesecake part just kind of turned into a little log that kept rolling around and I kept trying to bite it and it would reform like gum. Eventually the bite would somehow disappear, but that was on its own terms and not yours. As far as taste goes, cold pumpkin pie was the closest comparison.

Although the PSL marketing scheme is years old, our pumpkin-tasting experience of 2021 has been exciting and new. From savory to sweet to aromatic, we are here for it all. Stick around in the weeks to come as Noah and I offer more honest reviews about Trader Joe’s seemingly endless pumpkin products.

By: Noah Harrel and Lauren O’Brien

To Move or Not to Move, That Is the Question
PLNU Military Services and Student Veterans of America host 9/11 Ceremony