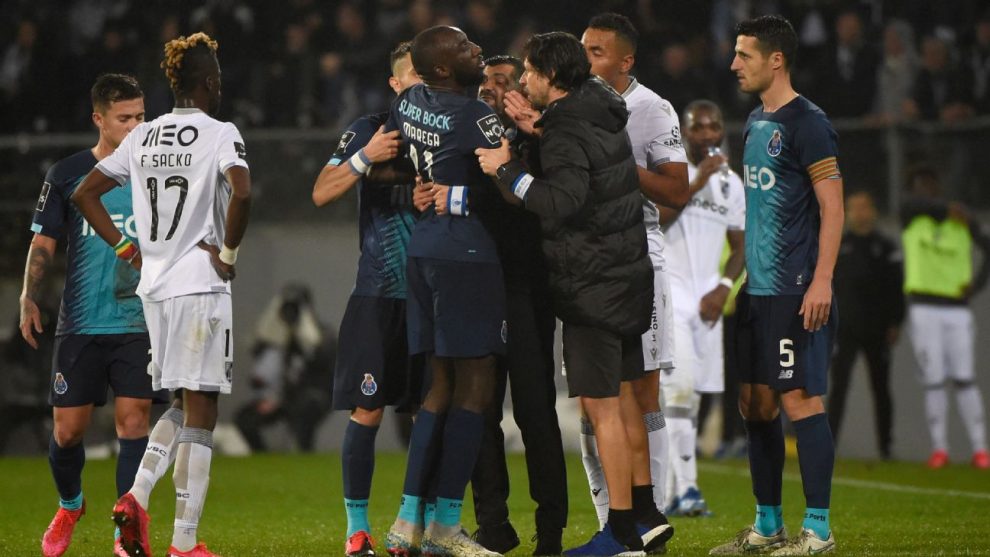 On Feb. 16, FC Porto forward Moussa Marega left the soccer field in the middle of the second half, both middle fingers raised to the crowd after opposing fans showered him with racist insults.

Marega is the latest victim of racism from fans in European soccer as the sport’s struggles to deal with racism continues in 2020. Marega is a French-born Mali international player and currently plays for FC Porto, one of the top clubs in Portugal. He previously played for Vitoria Guimaraes, which was the opposing team whose fans racially abused Marega.

League officials from Liga Portugal released a statement that said, “Liga Portugal will do everything to ensure that this episode and all other racist incidents do not go unpunished.”

If the incident with Marega was an isolated incident, then the league’s statement might have validity. However, Marega is only the most recent soccer player to deal with racist fans.

Other soccer stars like Raheem Sterling has dealt with racist chants from opposing fans and even his own fans. Last December in England, a game between Tottenham and Chelsea was halted because Tottenham fans were chanting and comparing the Chelsea defender Antonio Rudiger to a monkey.

England in particular is a country that has struggled to curtail discrimination at soccer games, especially racism. Kick It Out, an English group seeking to end racism in soccer, reported there were 422 reports of discrimination at soccer games in England, and the majority of the reports were racist incidents. This meant there was a 43% increase in discriminatory incidents in the 2018-19 season compared to the previous season, at least in England.

“It is really sad to see racism again at a football match, but I think it’s very important to talk about in public. If not, it will be forgotten again in a couple of days (as always),” Rudiger tweeted after his incident. “It’s just such a shame that racism still exists in 2019. When will this nonsense stop?”

Players like Sterling have begun to take strides and are attempting to resolve the issue. This month, Sterling commented he wants to create a “Premier League task force” of players in England to fight the growing issue of racism in soccer. He believes elite players can use their platform to enact social changes, and soccer players in the Netherlands protested racist chants against one player by standing still for a minute to begin their games, intending “to make fans aware that football belongs to everyone.”

Sports are often a microcosm of society, and Piara Power, executive director of Football Against Racism in Europe, believes the “epidemic” of racist comments stems from shifting language across European society.

“[Eastern European governments] are often using language of intolerance, scapegoating minority communities,” Power said to ABC News. “A lot of this is spilling over into [soccer].”

This increase in racism should worry players, fans, league officials, governments and everyone in between. The problem in Europe resembles the National Anthem protests in the NFL that began in 2016 and continue to impact the league. There is no easy solution, but players and fans must have zero tolerance for racism.

Returning to the Morega incident, it was sad to see that his teammates and opponents tried to restrain him and prevent him from leaving the field. If racism is to end, then the teams needed to make a statement; one way to do so would have been for both teams to leave the field with Morega in an act of solidarity.

Racism has plagued history, and racist comments and behaviors have led to some of the greatest tragedies in world history, such as the Holocaust, the Rwandan genocide or even slavery. Holocaust survivor Elie Wiesel commented on the importance that people not be bystanders when racism occurs.

“If we forget, we are guilty, we are accomplices…and that is why I swore never to be silent whenever and wherever human beings endure suffering and humiliation,” Wiesel said in 1986. “We must take sides. Neutrality helps the oppressor, never the victim…. Wherever men and women are persecuted because of their race, religion or political views, that place must—at that moment—become the center of the universe.”

Wiesel’s comments rang true in 1986, and they still are crucial today to the world of sports and society at large. Soccer players and fans alike must take a stand against racism, and this issue of racism must “become the center of the universe” in 2020.