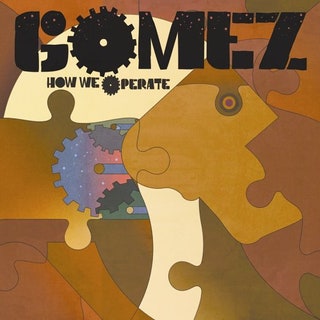 “How We Operate” was originally just a CD my friend’s dad would casually throw on for a drive, but it quickly became the soundtrack for Saturday car rides to the weekly soccer game. Crammed among the disc boxes and cassette tapes, this folk-rock album by English band Gomez always stood out to me as what perfect “dad rock” should sound like. The bright acoustic guitars layered under distorted riffs and crisp drums accompanies the unconventional three lead singers Ian Ball, Ben Ottewell and Tom Gray on thoroughly worked songs that maintain a consistent tone and fulfill a wonderful thematic arc of both introspective and extroverted wandering.

The fellas in Gomez can write excellent songs with exciting key changes and unexpected time switches that always catch me by surprise. Where they thrive lyrically is in their choruses. The deliveries are always passionate and the melodies are so catchy and memorable they leave me with an unshakeable desire to travel, yet without being over sentimental or melodramatic. The lyrics are playful and reminiscent of the blues or some travelling musician, with a performance that always stays dynamically appropriate and sometimes even a little sarcastic like in the hook for “Cry on Demand”:  “Sometimes I wish I could cry on demand/ Boo-hoo Boo-hoo/ Given all these troubles on my mind/ The tears won’t come out.”

To say this album was influenced by the music of Charley Patton would be an understatement, evident by the eighth track, “Charley Patton Songs,” a melancholy tribute to the long departed singer and his epoch. The shrieking electric guitar and bell-like piano playing emulate the Americana aesthetic in Charley Patton’s style and give the album an earthy and wooden texture; it provides the project with a genuine vibe with clear goals of homage that are faithfully executed. The songs vary in consistency to that sound. Some tracks like the opener “Notice” and “How We Operate” lean a bit more toward British Pop Rock (something like Coldplay comes to mind). Of the bluesier songs, “See the World” showcases folksy lyrics about “seeing the world and finding an old-fashioned girl.” The track “Chasing Ghosts with Alcohol” stands out as strongly emulating the country style and expanding on it. Most exemplary and my favorite part of the album is when a guitar solo erupts through the slide guitar melody with a bite-like distortion that sounds as if it were recorded on 100-year-old equipment.

Without a doubt, the core sound of this album comes from the expansive guitar performances and collusive variety of vocal melodies. The acoustic guitars drive all the songs with their bright tones and constant strumming patterns, and the recording has a tinge of fuzz to them hinting that they were recorded with a microphone. I like that sound particularly on these songs because the subtle air of background fuzz that picks up when the guitar is unaccompanied has a very homey feel that accentuates the southern country vibe. The pairing of the guitars and the vocal performances are key to the album’s pacing. All three singers take turns carrying the lead vocals while the others add creative harmonies in the background. The rotating order of singers adds varietal timbres to the tracks, and when they start to diversify their sound, their individual voices complement the change.

That said, the unsung hero on this project is the persistently precise rhythm section. The bass guitar has a consistent tone from song to song with a thick reverberation that sounds like it’s reverberating in a wooden box, and clean staccato rhythms keep the pace moving. The piano and organs sprinkled around never really take center stage on any song; most of the songs are guitar led, but the keys give the tracks a lot of color. On songs like “All Too Much” or “Woman! Man!” the keys have a very airy and ethereal presence that act more like a resonating marimba than just a piano. Finally, the drum set has less responsibility in keeping a constant rhythm thanks to the acoustic guitars, and it embellishes the melodies and the various bridges or transitional moments.

As I get older, I find a few of the lyrics don’t hold up as well, and some of the songs that don’t fit the tone as well could have been left out. Regardless, I still return to this project for its optimistic vivacity and visions of wanderlust. Whether it’s on the winding mountain roads up to Julian, racing through the endless Anza-Borrego desert, or cruising up Highway 5 at 2 a.m, “How We Operate” fuels my urge for adventure and my impulse to wander.