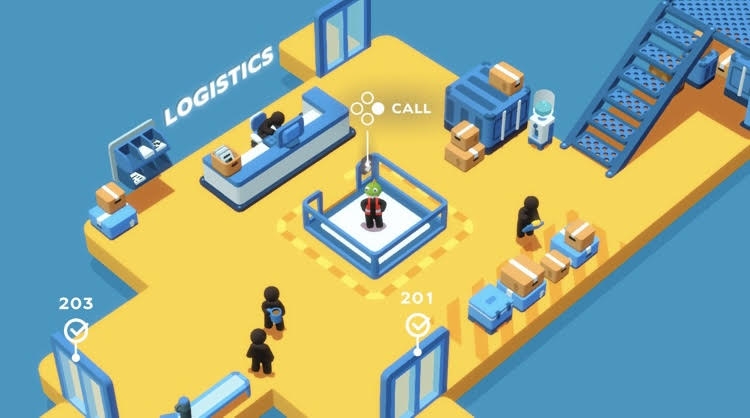 When you are jam-packed in, let’s say, Flex apartments, and the feeling of isolation sets in, the best thing to do is find something to laugh at. With this in mind, I played “Good Job!” with my roommates, and boy oh boy, did we laugh. We laughed so hard, in fact, that we had to close our windows for fear of waking everybody up.

Now for the game itself: you play as a CEO’s son trying to work his way up the corporate ladder by completing multiple tasks for each department (finances, logistics, etc.) and causing far more problems than solutions or, as business majors would call it, being a “depreciating asset.”

The game is built around levels you could theoretically complete normally, but you end up having to break through environments or cause damage in order to beat it as quickly as possible without having to worry about pesky, real life things like insurance or lawsuits.

The puzzles also build on themselves. The game introduces you to one mechanic per level, and builds on it until the end of the stage. The levels tend to be a bit of a grind due to their length, especially levels that involve tracking down workers and corralling them to a certain area.

There’s also the issue of debris, as slingshotting workers around a loading dock brings some penalties, and you have to manually grab and drag each piece of concrete or wood out of the way.

If you want a funny puzzle game you can play solo, look elsewhere. This game is purpose-built for multiplayer only. You’ll get bored quickly with the huge levels that often require a lot of backtracking, and the single player-mode removes a lot of the cooperative elements that make this game fun.

Overall, the game has peaks and valleys of both fun and rage inducing moments, but some sections are better than others. My favorite level involved a lazy river where my roommates and I tried to set up a blockade to get a lot of inflatable animals out of the water. Unfortunately, we failed at every turn due to the indestructible onslaught of a gigantic green beach ball, which knocked us aside each time. Anyone who has ever played a physics-based game should know that games tend to break themselves, either through glitches or just random chance. Several times we had to restart the level due to puzzle items being permanently stuck in walls, which was exhausting.

I recommend those who get easily motion-sick to avoid this game entirely, because the camera is constantly spinning around. I enjoyed my experience with “Good Job!” despite the issues mentioned. However, I would not recommend buying it at the current price. Instead, wait for it to drop between $10-$15 — then you’ll get your money’s worth. It’s energetic and rich with accidental comedy, so if you have a Switch and a few friends, I definitely recommend it.

Out of the Glovebox: “How We Operate”
Spring ‘21 Playlist: Chords on Campus