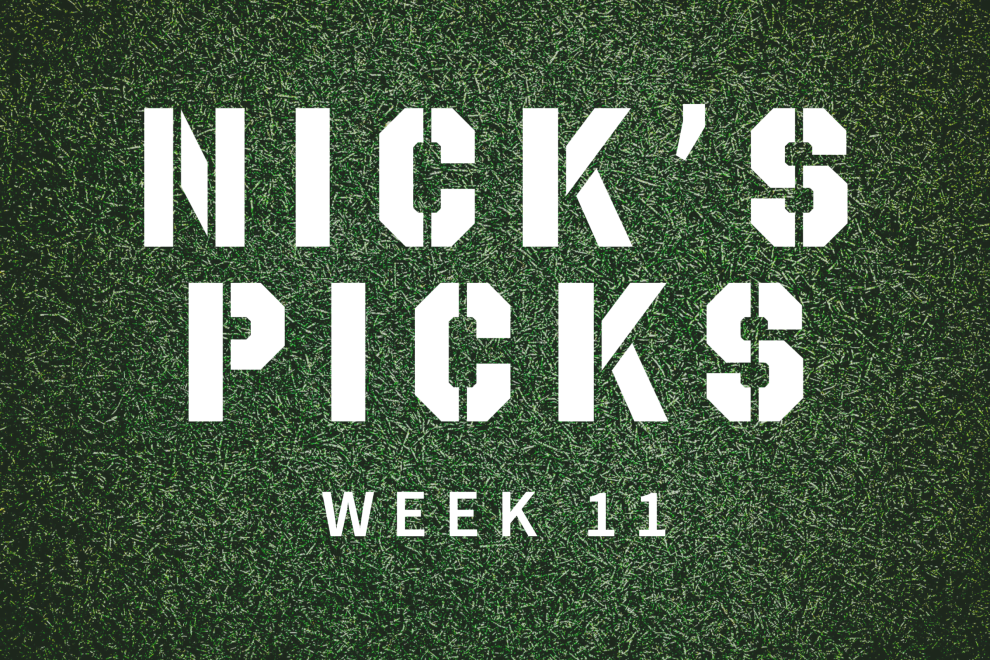 Week 10 was one of the most exciting weeks we have had so far. There was a game played in Germany, the Bills-Vikings game has been deemed the game of the year, and Justin Fields continued to break more rushing records in what has been a historic stretch of games for him recently. In Week 11, there will be four more teams on a bye, but just try to make it through this week because in Week 12 there will be no teams with the week off. The teams out on a bye this week are the Jacksonville Jaguars, Miami Dolphins, Seattle Seahawks and Tampa Bay Buccaneers. On this week’s edition of Nick’s Picks, we will find you replacements for players like Tyreek Hill, Geno Smith and Mike Evans.

The Steelers were able to pull off an upset against the Saints in Week 10, and their quarterback’s solid performance played a major role in the team’s overall success. Rookie quarterback Kenny Pickett (19.06 points) used the bye week the Steelers had to put some rough outings behind him and recuperate for Pittsburgh’s game against the Saints. He was very efficient with his passes and was active on the ground by rushing for 51 yards and a touchdown. That was a relatively easy matchup for Pickett and the Steelers, but look for the win to give the young quarterback some confidence heading into Week 11. Jared Goff (14.84 points) and his Lions got the win on Sunday, scoring 31 points in a back and forth game against Chicago. Unfortunately, Goff was only a part of 7 of those 31 points, and that’s why he put up a disappointing 14.84 fantasy points in such a high scoring game. It’s encouraging to see Goff and the Detroit offense have so much production, and this could mean he becomes more involved with the scoring in the near future.

Ryan Tannehill (vs. Packers): An impressive performance after missing two games with an ankle injury has me feeling confident in Tannehill heading into Week 11. He was going up against Denver’s defense—who have allowed the fewest points to quarterbacks this season—and put up 19 points. He’s got an easier matchup in Week 11, facing the Packers and is a valuable option off the waivers if your quarterback is on a bye this week. He is available in 93% of ESPN fantasy football leagues, so you shouldn’t have too much trouble getting him.

Baker Mayfield (vs. Ravens): My top “sleeper” pick at quarterback all the way back in Week 1 has returned 10 weeks later to make an appearance. Mayfield is back in the Panthers’ starting lineup with P.J. Walker out for a few weeks with an ankle injury, and I’m holding out hope that Mayfield will be coming back with vengeance. He has a chance to reclaim the starting quarterback job for good, since before the ankle injury, Walker had a firm grasp on the role. Mayfield also played really well in the latter half of Week 9’s game, so hopefully he can build off of that performance.

Sit or Start: In just a matter of a few weeks Justin Fields went from a potential draft bust to one of the best quarterbacks in the league. He has gained an immense amount of confidence over the course of this year, and even though his team is continuing to lose, he has been a standout in Chicago. He broke the record for most rushing yards in a single game by a quarterback with 178 yards, and then followed that performance up with 147 more rushing yards. He is becoming a valuable player in football, but an even more valuable player in fantasy football because his style of play produces crazy amounts of points. He needs to be in your lineup from here on out.

The change of scenery from San Francisco to Miami has treated Jeff Wilson Jr. (22.3 points) quite nicely so far. In his first game as a Dolphin, he put up 16 points and then followed that up with an even better game in Week 10. Wilson’s got a bye in Week 11, but when he returns to action in Week 12 versus Houston, he better be starting in everyone’s lineups. Chase Edmonds (1.9 points) isn’t enjoying his new team as much as Wilson is. Denver was hoping Edmonds could be a spark in their melancholy offense, but they failed to really even utilize the new acquisition. Hopefully in future weeks Edmonds will find the field more frequently, but for now he needs to stay on the bench of your fantasy team.

Darrell Henderson Jr. (vs. Saints): To say it has been a disappointing season for Henderson would be an understatement. He was supposed to be the top running back in LA, but he has only found the end zone three times, and has yet to put up over 15 points in a single fantasy game. However, he had decent production in Week 10, and the Rams’ favorite offensive weapon, Cooper Kupp, might be out in Week 11. The Rams will be forced to turn to other players on offense if Kupp remains out, and Henderson will surely be one of those players.

Rachaad White (BYE): I have never picked a player as a “sleeper” when they have a bye coming up, but White’s upside is too high to pass up. After his Week 10 performance, the consensus surrounding the young running back is that he won’t be on waivers after this week. His teammate Leonard Fournette left Week 10’s game early, and White was given the same playing time that Fournette typically gets. He ran for over 100 yards, and is capable of being a breakout star when Fournette is injured. He’s worth stashing on your bench during the bye week in hopes that Fournette will stay out of the lineup.

After a three-game stretch of elite level play, Mecole Hardman (0 points) was out with injury in the game that I picked him to be a “sleeper.” There is a chance he was banged up after the amount of playing time he was getting, since his activity was the highest anyone had seen in his career. Regardless, there was a lot of action on the waivers surrounding Hardman and he’s now owned in over half of fantasy leagues. Look for him to come back from his injury and potentially put up similar numbers to the ones he was beforehand. Sunday Night Football saw Josh Palmer (7.4 points) receive a high number of targets, but an inability to reel many of them in. Palmer was passed to an impressive amount of times—eight to be exact—but he only managed to catch three of those passes. His fantasy production took a hit because of this, but the Chargers’ willingness to pass him the ball is a positive sign.

Christian Watson (vs. Titans): On primetime TV against America’s team the Dallas Cowboys, Watson had the game of his life. He caught four passes for over a hundred yards, with three of those catches being touchdowns. This stellar game resulted in 32.7 points for the young receiver, but his performance may have been a fluke. He has been pretty dismal up until this point. I wouldn’t trust Watson enough to immediately make room for him in your starting lineup, but he is worth a spot on your bench in case he keeps up this production.

Donovan Peoples-Jones (vs. Bills): This receiver is quietly having the best season of his three-year career, and he’s outperforming any other receiver on the Browns. Peoples-Jones has posted double digit point values in five of his last six games, catching for 70 yards or more in all of those as well. He has major upside with Deshaun Watson set to return from suspension in Week 13 for the Browns. The quarterback upgrade for Peoples-Jones should result in more fantasy points for him, and to further add onto the hype of Peoples-Jones, he is still available in 78% of fantasy leagues. I’d go snag him while he’s still out there.

The hassle to find replacements for your players who are on a bye is almost over. We are one week away from Week 12 where no teams will be on a bye, and then after that there will only be two more weeks with teams having the week off. Although it will be nice to not have to worry about bye weeks soon, it is still imperative that you remain aware of who is on the waivers. Finding “sleeper” picks can be a difference maker down the road if someone else on your team gets hurt or starts to play poorly.