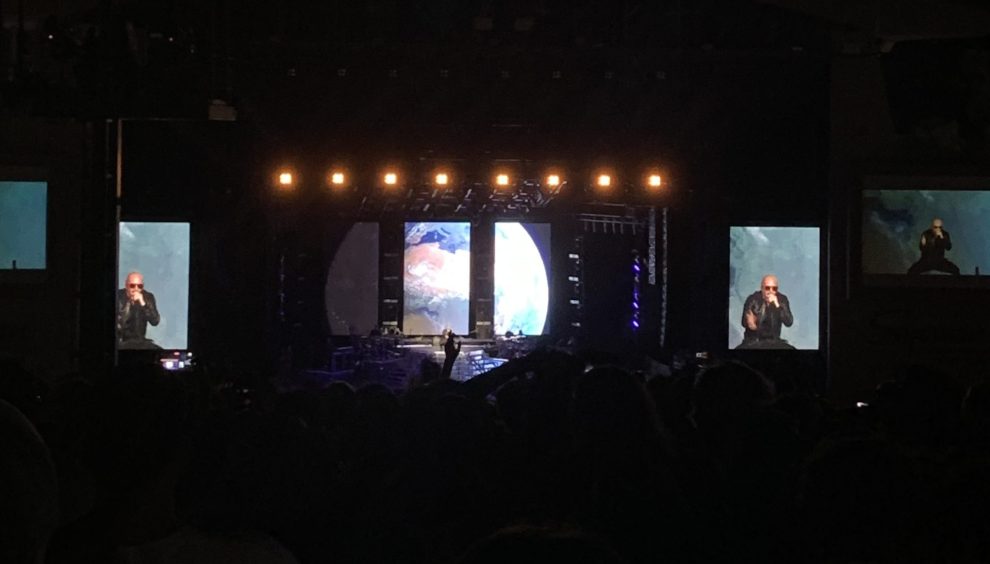 Screams erupt. Lights flash. Smoke shoots up in the air as Mr. Worldwide enters the stage. The crowd goes wild.

Their excitement is uncontrollable. The energy of Pitbull plus the energy of the crowd is out of this world. Everyone dances the night away and has the time of their lives with their friends.

On Wednesday, September 21, Pitbull came to Chula Vista to perform at North Island Credit Union Amphitheater. He is currently on his “Can’t Stop us Now” tour, performing across the United States. Young adults and older fans all joined together for a night of dancing and music. Several people from Point Loma Nazarene University attended the concert.

PLNU students were quick to jump on a cheap ticket, especially when the artist is a beloved singer from their childhood — Mr. 305. The ticket prices ranged from $30 to $45, and there were party packs where you could buy four tickets for a cheaper price, so it was enticing to groups of friends. The general admission lawn tickets were a popular pick for college students.

Another iconic artist, Iggy Azalea, opened for the show. Originally, it was supposed to be Sean Paul; however, he had to leave the tour due to booking complications by his management team. The crowd went wild when Iggy Azalea played her number one song: “Fancy” before Pitbull came to the stage.

Pitbull was a very popular artist in the early 2000s, and he is clearly still relevant today due to the consistent high attendance at his concerts.

But, why do students still care about Pitbull? Many PLNU students said that it is because they grew up listening to him, so he has a special place in their hearts.

Sydney Boyatt, a first-year student who attended the concert said, “It is so embedded from our childhood, and we’ve all listened to Pitbull growing up. So, to see him live when we’re grown up was an incredible experience.”

Many other students agreed, including Cielo Vargas and Gabby Starkenburg, who are also first-year students at PLNU. Even though Starkenburg did not attend the concert, she still has a love for Pitbull, and she was disappointed she missed the show.

Pitbull has been performing for over twenty years, and he is still relevant because of his association with Gen Z’s early life in the 2000s. Students talked about how he brings a sense of nostalgia that reminds them of their childhood.

“I think that Pitbull was really popular when we were young, so it’s a nostalgia factor,” said Cielo Vargas.

Pitbull is an icon for many students because of his presence in their youth. Even though Pitbull is a forty-one-year-old bald man, he has managed to maintain his career. Many PLNU students said that they loved his baldness because it is part of what makes him Pitbull.

The song “Fireball” was a common fan favorite amongst students. Those who were present agreed that they all felt a fun energy at the concert and enjoyed dancing with their friends.

Many of his songs are popular at parties, dances or simply used to get hyped up with friends, so his songs are well-known by college students and teenagers. For 2000s babies, his music has been a part of their lives since they were younger.

At the concert, he mainly played songs off of his older albums. To get the crowd going, he opened with “Don’t Stop the Party,” which is a song off of his 2012 album, Global Warming: Meltdown. He also played many songs off of Globalization, Planet Pit, Pitbull Starring in Rebelution, and hit singles off of his other albums. The crowd was thrilled when he closed the show with his top songs: “Time of Our Lives” and “Give Me Everything.”

According to the students of PLNU, Pitbull is an iconic artist who puts on an incredible and entertaining show. Several of them enjoyed the night out with their friends and made many memories at the concert. Mr. 305 brought the students of PLNU together to reminisce on the good old days.

Finally Fall: A Watchlist for the Perfect Fall Vibe
“Can’t Stop Us Now”: A Blast to the Past of Early 2000s Greatest Hits