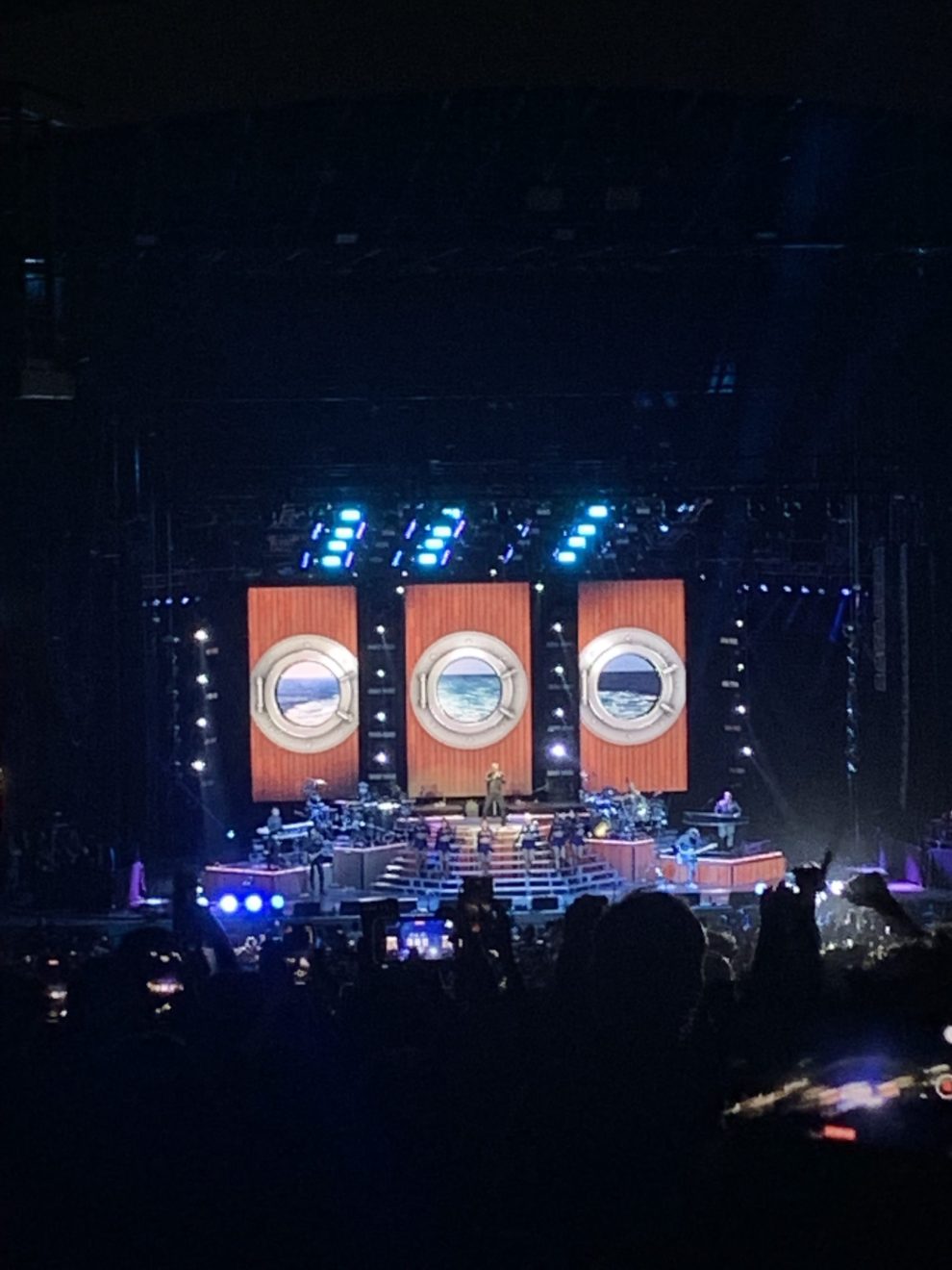 Crowded fans shed a muggy heat. Strobe lights and flashlights cast shadows over the lawn and silhouette the dancing figures. Yells of excitement fill the air; “Mr. 305” and “Mr. Worldwide” ripple across the stadium seats. The atmosphere drips with anticipation as Iggy Azalea finishes her final song. The crowd surges forward and the legendary bald man with his iconic dark sunglasses steps onto the stage.

“We came to party!” the crowd replies.

It was a party that rocked my entire fall semester thus far.

Pitbull made a stop at the Sleep Train Amphitheater for his Can’t Stop Us Now tour on Wednesday, Sept. 21, packing in some of his biggest hits that blasted me back to the glorious age of brace-faced Lainie. With an opening act led by Iggy Azalea, it was hard to contain my excitement at the thought of two of my favorite middle school legends convening to perform in my hometown of San Diego.

Pitbull was here last year around the same time, and I regretted not getting to see him perform. This year I was determined not to let that happen again.

When I heard Pitbull would be in town on Wednesday, on a whim of spontaneity Tuesday night, I secured tickets with a couple of my high school buddies. With the quick rush to get tickets and secure parking, we pulled up to Chula Vista not sure what to expect.

As we walked into the venue, we found ourselves surrounded by a crew of people in bald caps and we knew then and there that it was going to be a night to remember. Although, what we would remember it for extended beyond the bald caps.

As we walked onto the lawn at the back of the stadium, I was skeptical at first. This was a big, open space with very few people on the lawn. Given I was able to get seats for cheap Tuesday night, I wasn’t sure what the crowd turnout would be like. However, as the night progressed, my friends and I realized we had been gradually pushed to the back of the lawn as people crowded to the front.

After a subpar DJ performance — excellent song choices, just average mashup techniques — Azalea took to the stage and the crowd leaned in snapping photos and craning their necks to catch a glimpse of her.

I had difficulty getting into some of the newer stuff that she sang. It was fun to dance to; I just couldn’t understand every word she was saying. I noticed it wasn’t just me who wasn’t feeling it. The dancing crowd lulled a bit. However, her voice, persona, the dancers, all of it oozed with confidence. In songs like “Work,” my jaw dropped as this woman served fiery lyrics and dance moves on stage, strutting with such an air of conviction that I wanted to get on my knees and meekly whisper “I’m not worthy.”

That confidence flowed into her classics that everyone and their mom knew. Some of her most iconic rap solos in songs like “Fancy” and “Black Widow” had the stadium roaring as they echoed her slapping lyrics.

The transition from her greatest hits to Pitbull was smooth as ever too.

If you’ve listened to Pitbull before, you know that his music is dancing music. Going from head bopping to Azalea, to jumping around and screaming at the top of my lungs for Pitbull was perfect timing.

As a 41-year-old man, I was nervous his voice would sound different or he wouldn’t be as hype with the audience. I stood corrected.

From the first minute he took to the stage, Pitbull hit us with the same energy and excitement that I remember from his early albums. He did a lot of calls and responses with the audience and taught them song lyrics. It felt like an interactive experience even all the way at the back of the amphitheater.

I’ll admit, I used to view most of his music as poppy, early 2000s club music. And granted, that is the genre it would fall under. However, hearing him speak and interact with the audience gave me a new perspective to his work.

He took time in between songs to speak about how music is a universal language. It was unexpected, but I could tell it really resonated with everyone in the audience. Everyone was so willing to scream, dance, laugh, sing/speak in the language most comfortable to them (particularly Spanish). Especially in songs with his iconic phrase “dale,” you could hear the audience echoing him.

He also spoke about different party scenes as he transitioned through his performance. He started off with songs related to a carnival, then he transported us to a festival, then to a block party. It felt like we were in all these places with the song choices, lighting and projections that engaged the audience.

The most memorable songs from the night were the ones he introduced to the audience. He’d holler lyrics and tell the audience to repeat them. He did this for “Hotel Room Service.” Everyone was screaming ‘we at the hotel, motel, Holiday Inn!”

The crowd also roared for songs like “Fireball,” “Feel This Moment” and “Time of Our Lives.”  He didn’t even need to teach the audience those ones.

One of the last songs he sang was “Timber.” By that point in the night, most people had been on their feet for over 3 hours, but the party kept going. People of all different backgrounds and ages finished the night strong swinging their partners, friends or spouses “round and round.” Whether you were strangers or long-time friends, most everyone had a buddy for the last dance. Shout out to the random guy who twirled me around! You got moves!

Even more so than a fun, dance-filled night, Can’t Stop Us Now was a night of nostalgia and comfort. These lyrics and songs reminded me of good times and memories. I think that’s what most people went to see Pitbull for.

A cloud of confetti fluttered to the ground and people rushed to the exits. My friends and I stood unmoving, drenched in sweat, voices hoarse, in awe of the man, the myth, the legend, Mr. 305. What a night!