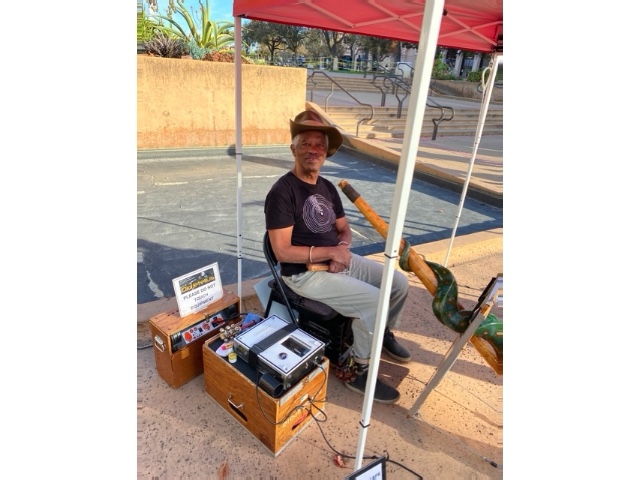 You may have seen him at Balboa Park, you may have spotted him near the koalas at the San Diego Zoo, or maybe you heard him droning in the distance as you walked the brick paths of Seaport Village. Whether he is a human or a visitor from another planet, you have undoubtedly run into the sound of Didjetellus a.k.a. Mitchell Augustus Walker, San Diego’s finest didgeridoo player.

Hailing from Brooklyn, New York but a self-professed native of the starship Earth, Walker has played the didgeridoo in San Diego and around the world for more than 20 years. Easily recognizable by his outback hat riddled in Star Trek badges and his 52-inch didgeridoo enveloped with a Rainbow Serpent, Walker’s unique and recognizable didgeridoo sound is unlike anything you’ve heard before.

But what exactly is a didgeridoo? One of the oldest instruments on the planet, the original didgeridoo is naturally created by termites that devour the inside of eucalyptus branches and render them hollow. Around 40,000 years ago, the Aboriginal people of Northern Australia discovered how to recover these branches and breathe through them to create the unique reverberative sound of the didgeridoo.

While didgeridoo or “didje” for short is the common term for this instrument, this is not its original name but rather the one adopted by the first colonizers in Australia. There are several different names for the instrument depending on the dialect of the tribe it hails from, but it is also widely known as a “yirdaki” and the “yigi yigi,” to name a couple.

Typically played in a cave or around a fire for ceremonial purposes, the didje is heavily associated with the beliefs of the Aboriginal people. Mythic beings that existed during a time known as the “The Dreaming” molded and shaped the Earth into its natural and human elements. Since then, no progress has been required by humanity, only a continuation of existence and practicing of the mythic rituals. The Rainbow Serpent that graces Walker’s didje is a totem of one of these beings and is associated with the coming of rain or the prevalence of drought.

The didgeridoo’s wide sound is achieved with a technique known as “circular-breathing.” The player has to expulse air from their mouth while simultaneously inhaling through their nose to create an endless drone. With several inflections of the tongue and screeches from the voice box, players can mimic all sorts of noises like animal sounds or starships to create music and accentuate storytelling.

Walker’s technique is unique and unparalleled. Inspired by the soundtrack of “Crocodile Dundee” and sounds of science fiction films, Walker plays his didje through a set-up he calls his “portable cave.” It consists of an amplifier and effect pedals to create loops, distortion, phasing and all sorts of strange noises to contribute to his idiosyncratic sound.

Walker also plays a multitude of rhythm instruments attached to his legs, hands and feet which accentuate and complement the rhythm of his drone. His CD recordings are both ambient and encompassing, the echo of the didje sounds like the ever-present hum of a starship engine, and his sparse, space-y keyboard playing is hypnotizing.

Walker just might be one of the greatest didgeridoo players in the world and he constantly plays around San Diego. Catch him at Balboa Park every other Sunday for free, at Seaport Village downtown or at the San Diego Zoo and Safari Park in the summer months.

Spotify link to his music:

Out of the Glovebox: “Sauver l’amour”
Forget Popcorn, Grab Some Jelly Beans for 5 Easter Films