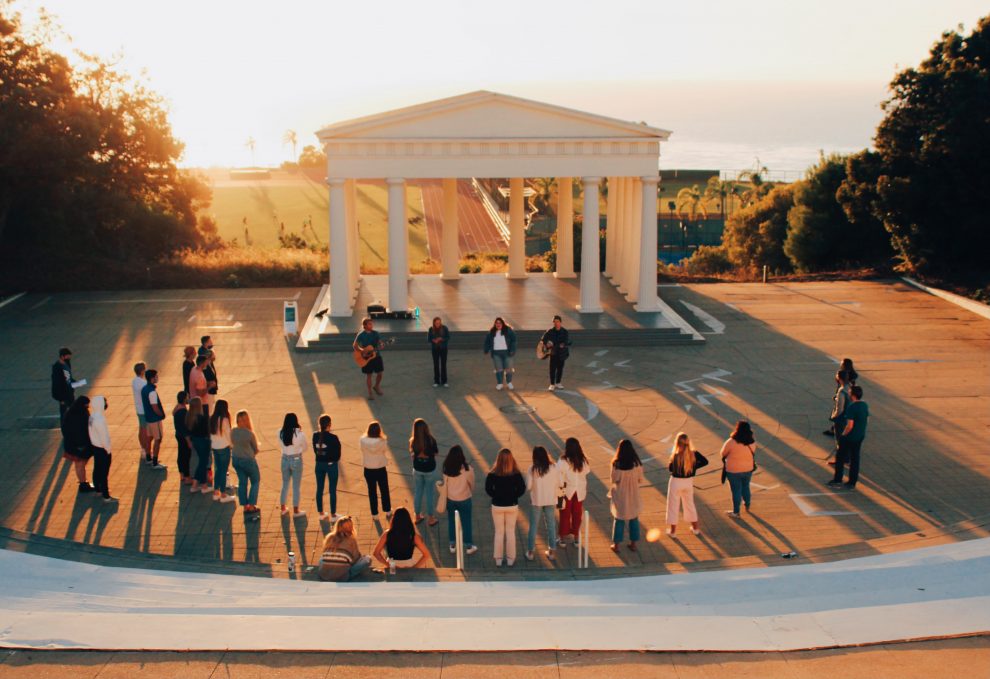 It was 4 p.m. on Friday, and rather than mosing over to Sunset Cliffs or another campus for a pre-weekend shindig, I attended “Friday Nights at the Greek,” a worship and fellowship group led by four PLNU freshmen: Katie Coil, Dean Maas, Abby Marsh and Carter Taylor.

I found out about the group after spotting the four students worshipping together on my way to the Caf. In the weeks to follow, more students joined their gatherings, amplifying and unifying the hymns that echoed from the theatre.

Coil, one of the singers, shared how the group came together.

“It started off in August with me and my friend Abby just wanting to find some way to worship because we missed it during quarantine. We then met Dean and Carter who are both into music and also wanted to create a community-centered worship.” Coil said even with students living on campus after quarantine, PLNU lacked a community and culture of corporate worship.

“It’s hard with COVID happening because everyone is worried about getting it, but we really wanted to bring that community back to Point Loma Nazarene University because that is what our school is known for,” Coil said.

Their first meet-up occurred in October with around 45 students showing up (everyone was socially distanced). The size of the turn out motivated the group to continue the event, with hopes of it continuing next semester.

Despite the events of this year, Coil attributed the connection and success of the worship group to God’s timing.

“For four musically-inclined freshmen to come together [to lead worship] and to have such a big turnout of students be willing to be a part of this is really cool,” Coil said. The four leaders want their peers’ input about what they want to hear during worship. Each meeting, the leaders create a set list so attendees know what will be sung. They also have time for open prayer.

Shaw’s neighbor, Maas, first invited him to the worship night and discovered his interest in becoming a youth pastor. Maas then asked “Pastor Noah” to share a message at the gathering.

On Friday, Shaw referenced the story of Peter and the importance of getting out of one’s comfort zone.

“This message has been on my heart and mind these past couple months because we are at a turning point in our faith as college students,” Shaw said. “This is where it is important to get out of our comfort zone like Peter did. When he [put trust in Jesus], he saw amazing things happen.”

Shaw also mentioned how the pandemic took away many aspects of teens’ identities.

“People feel lost because their identity ended up being in temporary things,” Shaw said. “That is why it is so important for students to make Jesus their rock, because his presence will never go away.” Shaw noted how the timing of this sermon was not a coincidence: “I did not pursue speaking at the worship night, I attribute this opportunity to the timing of God.”

Coil related to Shaw, sharing how God’s timing was a huge factor in the development of the worship night as a whole.

“One of the nights we were practicing in September, a staff member from the Wellness Center came by and prayed over us to continue the worshiping and leading,” she said. This was PLNU’s staff doctor, Charles Hardison, M.D.

Hardison had experience with student-led worship groups in the past, going back three years ago when he met a group of students worshiping at the Greek one morning.

“I asked them what they were there for, and they said that they were just worshipping and were praying for revival,” Hardison said. “I was really impressed and I joined them for a year every Tuesday, rain or shine, at 6:30am. I was being led by students — that was the beautiful part. It’s one thing for a chaplain to recommend worship, and it’s totally another thing when the students themselves are worshipping.”

When that group of students graduated, Hardison said he was disappointed to see their worship gatherings cease, but he said he knew God was in control. Hardison said seeing the four freshmen worship at the Greek this fall was confirmation.

“God had [raised] up a new group,” Hardison said. “I was so excited that they were all freshmen, this was student-led and that his purposes were continuing on campus for worship.”

Hardison also stressed the value of worshipping safely during a pandemic.

“Worship is the heart of God, and good for the body and soul,” Hardison said. “Whether it is alone or within a group, over and over in scripture we are commanded to [worship].”

For students struggling with their faith, Hardison encourages them to find a safe place to worship.

“I know that there are risks associated with being close to people but there are ways that we can worship and still be together, even by Zoom,” Hardison said. “The format isn’t the matter, it is the point of doing it and finding people you can do it with.” New ASB Board of Directors Position in the Works
Church Surf