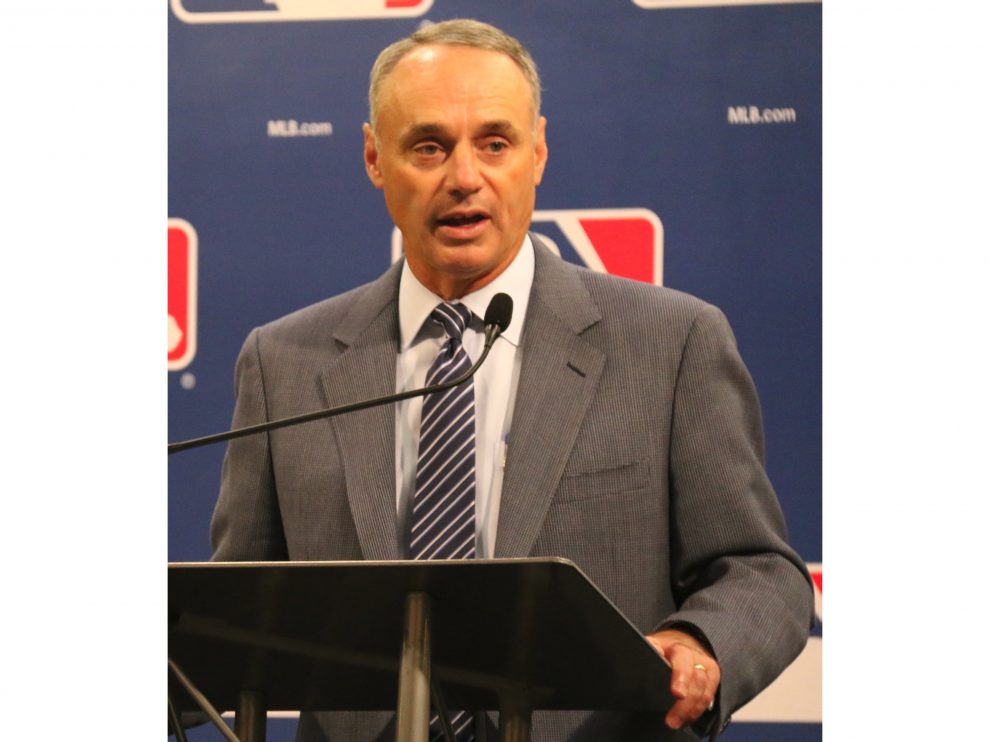 On Tuesday Nov. 3, Americans held their breath. There was a lot on the line, and it was hard to know which candidate would win. People nervously watched their TVs, waiting for ESPN to reveal the outcome.

Yes, ESPN. While major news networks focused on the presidential election, ESPN revealed the Rawlings Gold Glove winners, awarded to the best defensive players in the MLB at each position. Now, the Gold Gloves are an important award, but certainly not must-watch TV. However, of all days in the year to reveal them, the MLB chose Nov. 3, which just so happens to be the same day as the presidential election (ever heard of it?).

Rob Manfred, commissioner of the MLB, could have picked any day of the offseason to give out awards, and he chose that day. Fire Rob Manfred.

Known as America’s national pastime, baseball has become just that, a pastime. Baseball has fallen out of the national spotlight; only nine percent of people in the U.S. list baseball as their favorite sport, barely ahead of soccer, according to a Gallup poll from 2017.

The issue is young people don’t watch baseball anymore, and Manfred and the MLB failed to address the issue successfully. Games take three or four hours, and the slow pace of play is not exciting for casual fans. Highlights are rarely on social media because the MLB has a strict social media policy that limits what videos teams, players and fans can post.

Mookie Betts and Mike Trout are two of the best players in the game; both live in Los Angeles, but few people would recognize them if they ran into them at the grocery store. Although he has tried to remedy the problems, Manfred failed time and time again.

After sports shut down in March, sports fans longed for games to watch, anything really. Baseball had a unique opportunity to dominate TV screens across the country. Instead, they botched it, getting stuck in labor negotiations where the owners and players could not agree on how many games the season should be and how much players should get paid. Manfred failed to lead at a time when the sport could have rejuvenated its fans, unable to start games until July.

He failed in establishing clear, safe COVID-19 protocols for players and teams, and punishments for those in violation of protocols. At several points during the season, it seemed like the season might not be completed.

He failed to suspend any players on the Houston Astros for the biggest cheating scandal in a century, but he did suspend Los Angeles Dodgers pitcher Joe Kelly for eight games because he threw at Astros players.

He referred to the World Series trophy as “a piece of metal” amid investigations into the Astros cheating scandal, essentially diminishing the value of the biggest prize in the MLB.

He decided to hold playoff games at neutral sites and create a “bubble environment” to help ensure they could finish the postseason without complications. Then, he decided they should allow 11,500 fans at the NLCS and World Series, thus ruining the point of the bubble.

Luckily, the World Series went off without a hitch…oh wait, there was one small problem. Justin Turner, Dodgers third baseman, apparently tested positive for COVID-19 before Game 6, which he found out in the middle of the game. He was taken back to the locker room and had to wait there while his team celebrated their World Series victory. Except eventually, Turner returned to the field, joining his teammates, families and coaches, wearing a mask as his only precaution. (He can be seen in the team’s celebratory photos next to Dave Roberts, the coach who battled cancer.)

I don’t love Turner’s actions, but the real indictment is on Manfred. How did you not find out his test results before the game? What would have happened if there was a Game 7 and several Dodgers players tested positive? Were the fans really that important at the game?

On a night that should have celebrated the Dodgers and even the MLB for pulling off a season amid the most challenging of circumstances, Manfred messed that up too. The majority of the conversation surrounding the game turned to the coronavirus complications and detracted from the sport.

To top off Manfred’s 2020, he voiced support of another neutral-site World Series in the future, which would ruin some of the greatest moments in baseball history.  He also allowed awards to be given out on Election Day, burying another celebration for the MLB under more important headlines. At this point, I am unsure if Manfred even likes baseball, which seems like a sensible job requirement for a commissioner of the MLB.

I don’t think he can mess anything else up before the end of the year, but so far, his actions in 2020 say otherwise. In a time of uncertainty and division, let’s find something to unify this country: fire Rob Manfred and make baseball great again.

Election 2020: A Week of Victory and Progress
Reunited and It Feels So Good