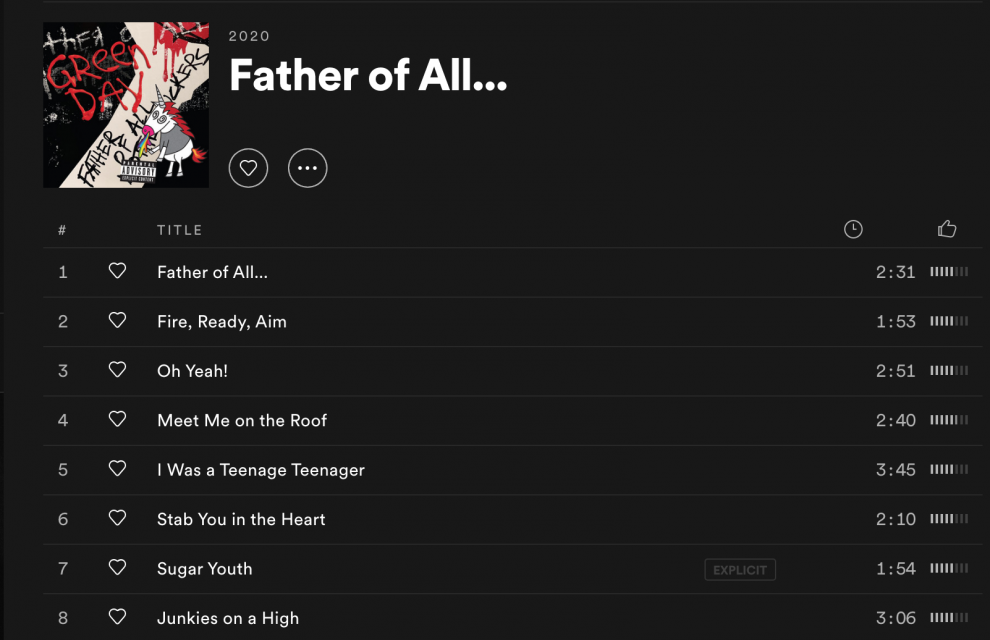 No features, no Swedish songwriters, no trap beats and absolutely no redeemable qualities. Green Day marketed this album on a platform of being “100% Rock ‘n’ Roll!” and “No fancy s#!t!” and yet this album is void of anything good at all.

Green Day was a pioneer of pop-punk, standing out from their contemporaries for having a fresh, raw and unfiltered sound. But, this album reflects the opposite of everything they used to stand for. Let’s start with the disgusting album artwork that repurposes their 2004 “American Idiot” album cover that is replastered with paint, expletives, and a stupid-looking unicorn.

Once the music starts, it’s impossible to not notice the first three songs all have the same musical melodies and too insultingly similar, dumb lyrics. Composed of the ad-libs “Oh yeah!” and “Alright!” and “Yeah Yeah Yeah,” these lines are lyrical prose at its finest.

The rebellious punk atmosphere has been sucked out of their work and replaced with songs looking to target 50-year-old suburban softball players. Their attempt at reviving rock ‘n’ roll themes from the ‘50s and ‘60s with a pop-punk flair falls flat on its face, sounding sterile and plastic. The album screams “we need money, but we don’t have any fresh ideas!”

This is as far as pop-punk can be from punk. If someone tried to convince me this was a high school punk band’s first album—that would be insulting to all high school punk bands. From the raw, angry, teenage sound of their 1994 studio album “Dookie,” Green Day has sunk to singing about meeting girls on rooftops for some “ooh ooh ooh,” and repetitive chants of “oh yeah!” to inspire rebellion.

The aptly named track, “Take the Money and Crawl” is probably the most appropriately named track on the album for not only encapsulating the theme of this project but also the career of these guys for the last 10 years. Despite two essays and four projects, the worst thing I had to do this week was listen to this album.. twice.

Green Day must be upset that Blink-182 had the worst punk album of the last decade because it looks like they wanted to steal that spot as fast as possible. I’m at a loss for words about this album. Maybe I’m too dumb to grasp their true meaning.