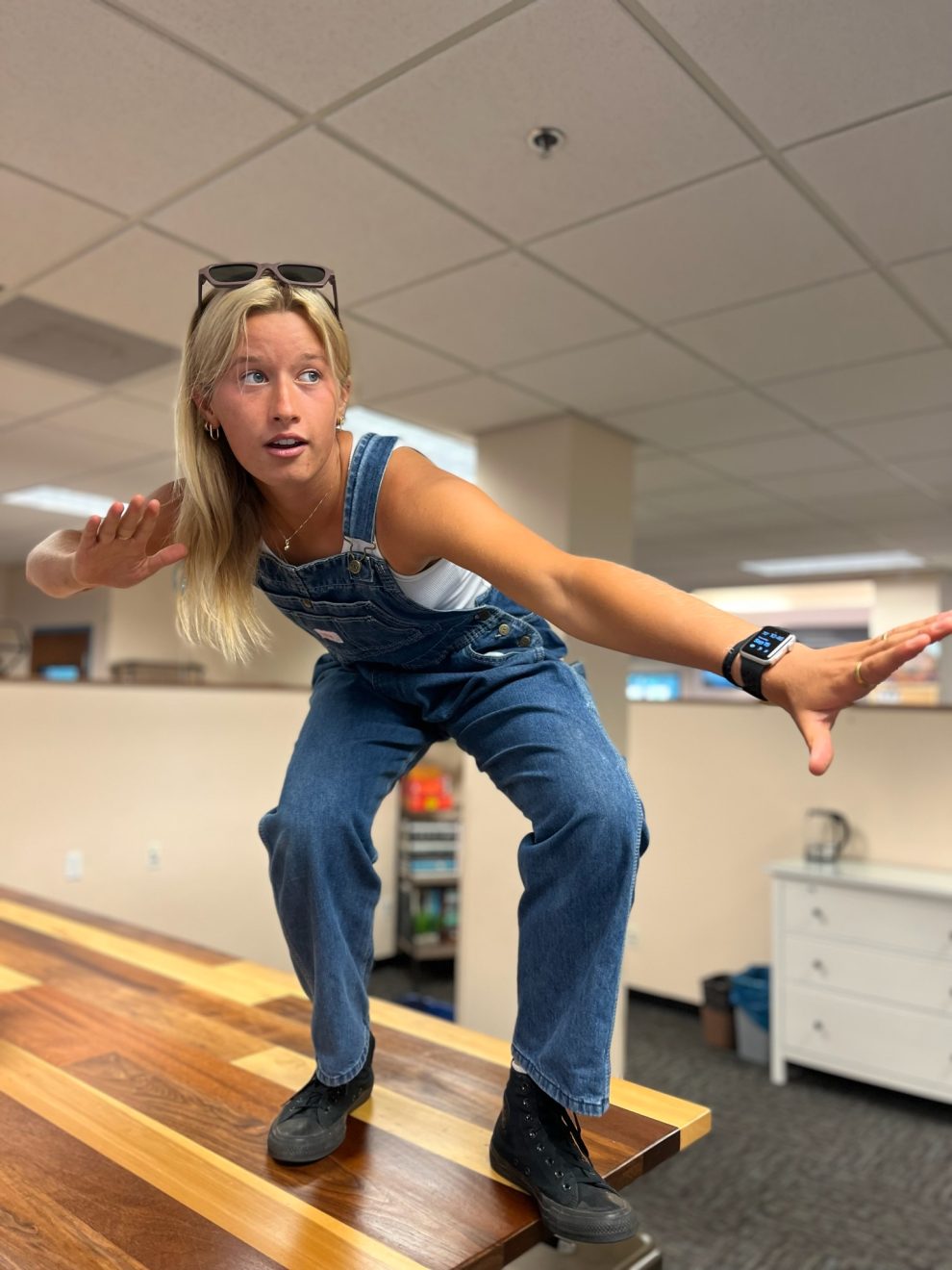 While Coach, Tom Ford and Puma models strutted down the streets of New York City Sept. 8-12, Point Loma students walked the runway of Caf Lane in their iconic fits.

“As a transfer, I’ve seen that the main fashion of Point Loma is a surf look,” said third-year communication studies major Kennedy Chavez. “Overalls, corduroy hats, Doc Martens, and loafers are a staple. And totes … everybody and their mother has a tote.”

Can you believe it? Even people’s moms are influenced by Loma’s fashion.

Kennedy wore overalls to school with a white crop top underneath, brown Doc Martens, and accessorized with a tote.

Point Loma fashion is mainly “influenced by the environment, meaning living by the ocean has an impact on how we dress,” says third-year graphic design major Cami Landreth. “The colors, the material, they are all influenced in one way or another by the world around us.”

Cami came to school dressed in a blue textured dress with her favorite colored sweater over it, yellow. Oh, and you can’t forget Doc Martens.

On campus, there is an overflow of unique style despite the common trends. With the current heat wave, students have been wearing a lot of summer clothing, but maybe they’re just trying to soak up the last week of summer.

Thrift culture is also very prevalent on campus and it would be a disservice during fashion week not to mention it. If you ask someone who they are wearing, they often don’t know because it was found at Goodwill, Salvation Army, or AMVETS.

“People like to find treasure and with vintage trending, thrifting is a college student’s answer. We as college students thrive on budgets- so we can’t beat prices at thrift stores- plus the sustainability aspect of it,” Grinde said.

Fourth-year psychology major and ASB President Josh Ching said that he gets style inspiration from an Instagram page called @lomavintage as well as the Goodwill bins.

“Since high school, my style has changed from Volcom pants to Dickies,” Ching said.

According to Ching,his style is based on “neutral colors and earth tones.”

Ching is wearing a white t-shirt paired with brown corduroy pants. He accessorized with all black converse and a black baseball hat.

Ryan Cummings (third-year media communication major) and Adele Gargiulo (fourth-year biology chemistry major) both said that their fashion choices are influenced by older people. Cummings describes his fashion as being “a mix of old people, Justin Bieber, and gardens,” while Gargiulo says that her fashion goal “is that [her] sister calls [her] a grandma.”

First-year literature major Malia Carrasco’s brother is her biggest style inspiration. “I respect how even his basic pieces are unique, which has led me to find basics that still look interesting,” says Carrasco.

This fashion week, she wears a beautiful colorful skirt with a simple white top.

Fourth-year finance and accounting major Mckayla Krolcyzk, senior ASB Director of Finance, said that her fashion has been influenced by dorm life.

“After living in a freshman hall for the past two years, the transition from Lululemon leggings and tank tops to steezy overalls, thrifted platform Doc Martens, DripCo tote bags, and Crap eyewear is extremely evident,” Krolcyzk said.

Her style icons on campus include Mercotti Sanders, Sloane Young and Alex Shoemaker.

Fashion week isn’t just about seven days of the year- it’s about what makes us our own individuals, and how we express ourselves.

“If the lilies of the field do not worry about their outfit tomorrow, why shall I?” Gargiulo said.

Extra Credit: Today I looked for how many Point Loma students I could see wearing overalls on Caf lane after department chapel. Can you guess how many I counted? Answer key is below.