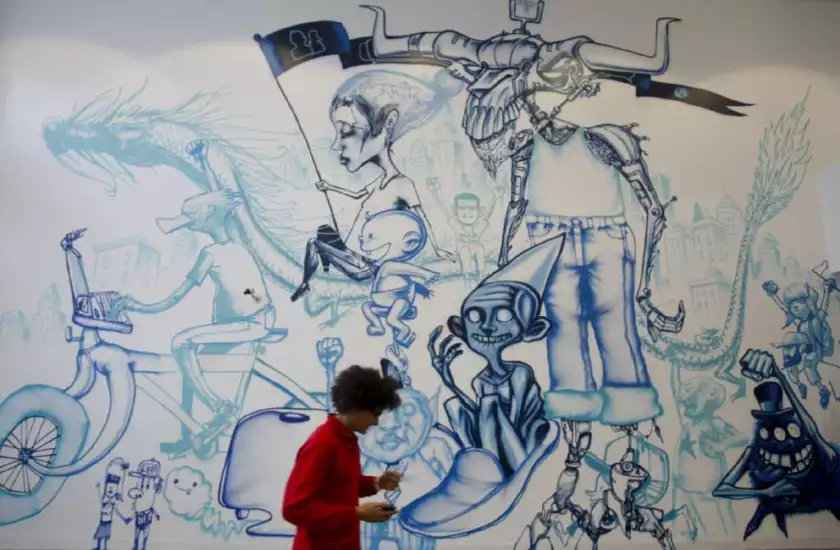 Meta, the company formerly known as Facebook, has an extensive collection of art throughout their various office locations that creates a complicated quandary about their effect on the propagation of art, as well as the community of artists trying to live off their own work. Through a variety of programs, Meta offers paid work to a wide range of artists: a diaspora of mediums including printing, painting, murals and immersive installations. But is their intent to promote the arts in their community, or to increase their public image and their property values?

Meta has been commissioning local artists to create decorative murals on their campuses since 2007, when they first hired David Choe to paint the walls of their Facebook office in Palo Alto. Since then, artists Drew Bennet and Scott Bonds have initiated projects such as the Artist In-Residency Program and the Analog Research Lab to proliferate the amount of corporate art owned and utilized by Facebook.

An anonymous source at Meta, Jane Doe, has worked for the company as an artist in their Analog Research Lab since 2020. Doe was hired to create custom prints that adorn the office walls of Facebook office in Los Angeles, as well as conduct workshops with Meta employees to engage their creative capacities. Doe affirms that Meta pays artists to decorate their offices but that the process might not be entirely for reasons associated with “loving art.”

“At the end of the day, I don’t think there’s a deep down support to art or artists” Doe says, “[Meta] sees art as a commodity and they’re commodifying it for their benefit. [The art] is worth a lot of money and [they] see it as property.” Murals do not carry any measurable monetary value but they do increase property values, according to ICI Realty, an online realty information resource. By filling their offices with murals and unique art pieces, Facebook is cementing their presence in established office spaces, as well as increasing the potential property value of their offices.

While the “true intent” of the company’s acquisition of custom pieces is indecipherable and only subject to speculation, Drew Bennett, head of the Artist-In-Residence program, believes that the program elevates corporate art and invites creativity. He was quoted in an interview for Wired Magazine saying, “You could just present your values on a piece of paper. But inviting a diverse group of independent artists to work alongside us is a more genuine expression of that creative process.”

Not all artists hired by Meta receive the same amount of creative and expressive freedom. Between the Analog Research Lab and the Artist-In-Residence program is a tier system that values specific artists differently based on their medium and popularity. According to Doe, artists at the lowest tier are hired to work pre-written workshops to the regular staff at Meta, the middle-tier consists of workshop creators, teachers and printing experts and finally, the Artist-In-Residence position is offered to select top-tier members that create and design workshops or other popular artists that could boost the company’s public image.

According to Doe, artists-in-residence are paid an “honorarium” which can be anywhere around $10,000 depending on the piece, as well as have all their basic expenses covered to sustain their residency. Lower tier employees are paid by the hour to lead workshops, including Doe (who wished not to disclose their salary), who has to work another job to supplement their income.

Doe, who has no aspiration to become an artist-in-residence, said, “There’s a division between residents and teaching artists. [PR] is much more strategic about who they hire for residents; it’s for tokening artists” she says, “Their talent is irrelevant, it’s from a PR and HR perspective, on a timeline perspective.”

The Artist-In-Residency program has been incorporated in Meta’s offices across the country and internationally. Their offices in Palo Alto, New York, Dublin, Berkeley and Boston have commissioned art for their offices and supplied paid work for the local artists in each of their communities.

“My biggest takeaway from being on the research team is that [Meta] commodifies art… [It’s] worth a lot of money and see it as property.”

Whether the art programs at Meta are well-intentioned is up for debate, and every artist might feel differently about Meta’s impact and involvement in the international art scene. Just like art, the experience of working for Meta is subjective.