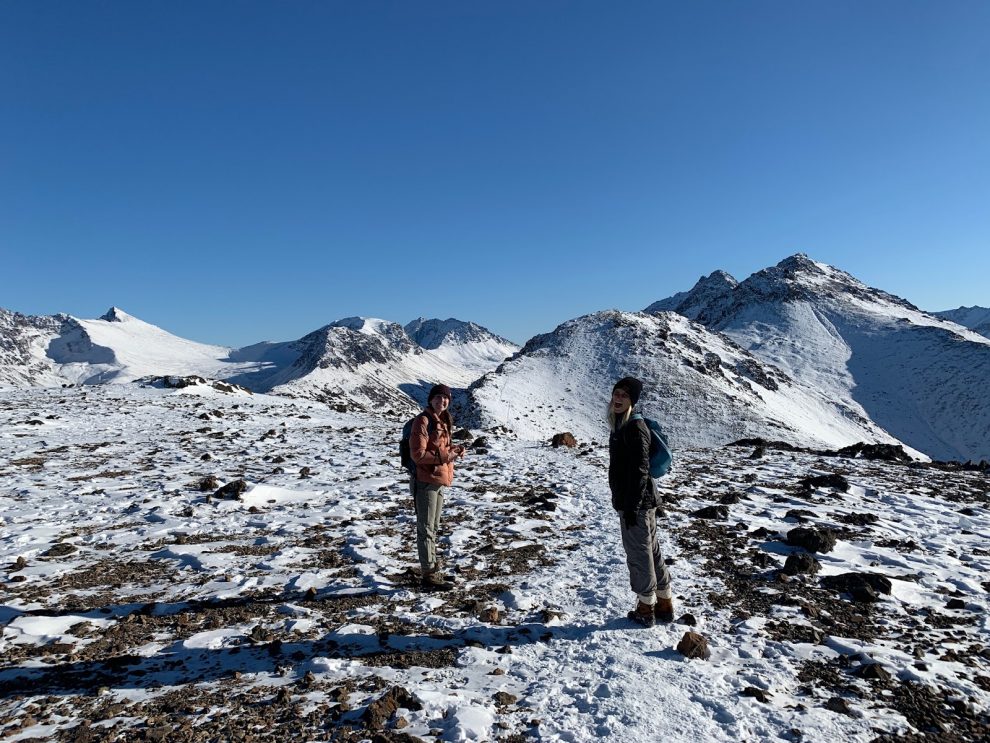 It was August when they asked. The leaves were still on the trees, the sun was shining; I was optimistic. “Yes, come to Alaska,” I said, “October sounds great!” Weeks pass, the temperatures drop, leaves fall and the day my two friends from the sunny Point Loma Nazarene University campus arrives. I try to make it to the airport right on time so they don’t have to wait in the 20 degree weather.

The first day was one we all sat around my living room, calling from wintery Alaska into classes conducted in San Diego. Sam Ogawa and Emily Gehlbach are senior psychology majors and explained to their classmates that where they were this weekend was a little farther north than San Luis Obispo, California.

I wanted to get them outside and into the mountains on their first day in Alaska, so we bundled up and piled into my little Toyota Prius with no snow tires, frost coating and California plates.

“Look at the little snowflakes!” they said excitedly, pointing to the frost on the windows before I took an ice scraper to it. I was thinking it’s cute now, but not so cute when you have to do this at 5 a.m. before work.

We made it to the spot where I wanted to walk in the valley, but not until after we had to turn around and drive down the mountain to avoid sliding off the side (see, no snow tires).

My friends loved it. We caught up on each other’s lives walking among the frosty trees. I was glad for the frost, the dead trees are so ugly to me. I hoped they would see snow fall while they were here.

We agreed we should sleep in the next day and then capitalize on the sunny forecast and go for a hike. I switched cars with my roommate, who had a vehicle much more suited to winter in Alaska, and we headed off on our hike.

It was incredibly clear and I did the thing hosts do where I just keep saying, “It’s never like this, you guys are here on such a good day!”

You could see Denali (the tallest mountain in North America) from Anchorage- it is 140 miles away.

These two were excited to be in the snow, almost as excited as my roommate’s dog who we brought along — a husky mix. The top of the peak inspired some silence, so we took a moment. Both Sam and Emily took a tumble as we headed down the mountain, but that’s part of the experience.

I decided we should spend the rest of the night in and make dinner. I got a glimpse of what life would have been like in San Diego if I stayed. I could have had quiet nights with friends, learning about how to cook tofu and commiserating over boys who just didn’t understand.

The next day we were off. We headed to Seward, a small fishing town three hours from Anchorage to stay at a quaint Airbnb we booked in advance.

There were some stops we had to take along the way, though. First, we stopped at a lookout called Beluga Point where I had hung out in high school and watched sunsets. It’s usually a strong draw for the local potheads, but not today. The wind was too strong for anyone else to brave the stop.

I told Sam about the one wave people surf here in the summer — the Bore Tide. It was hard to imagine anyone getting in that water of their own free will.

Next, I wanted to stop at the ski town Girdwood (sometimes lovingly referred to as Girdweed) to grab some lunch. Stomachs full of chowder and sourdough bread, we drove a short way to a little waterfall. That’s something I appreciate about Alaska — a waterfall, mountain or forest is always a stone’s throw away.

From this waterfall, we drove on to Seward. That drive is my favorite in all of Alaska. The inlet gives way to a valley of green mountains and blue lakes. I could tell my friends were reluctant to close their eyes and fall asleep.

Rolling into Seward with three miles left in my tank, we fueled up and grabbed some wood at the grocery store. They got a taste of the locals; a woman asked Emily if she was her daughter and a man in the parking lot told us we came at the worst time of year.

“Shut up,” I thought, trying to keep that from my friends — Seward in the summer is a bustling little town glittering in the sunlight; now, people were holed up for winter, stores were closed for the season and the rain had rolled in. We laughed off his comments as we loaded wood into the car.

Getting into our Airbnb was difficult. The online instructions listed a phone number that went to an unoccupied office and the note said: “We keep odd office hours during the winter months, but someone is always nearby if you need assistance!”

We didn’t see anyone nearby.

“Maybe if we just drive down a ways, we can just find it!” Sam said.

I thought this was optimistic of her but that is what we did. And there it was — a tiny cabin with a key tossed in an old stove on the porch. We unpacked our stuff and got settled.

We went into town for dinner at a Thai place I heard was good — Woody’s Thai. I was suspicious. How could there be good Thai food in this tiny fishing town where I doubt any Thai person had ever set foot? Who was Woody? Why does he have a Thai place here? The food silenced these questions.

It was incredible; the best Thai food I’ve had since moving here. After dinner, I made a fire in the wood-burning stove that was supposed to keep us warm. I didn’t think it would be too difficult. It wasn’t — the fire-making part that is. I did not understand wood-burning stoves, evidenced by the smoke alarm going off five minutes after I made my roaring fire. After a few searches (“what is a damper,” “how to use a wood-burning stove,” “are we going to burn to death in here”), we settled in for the night.

I woke up cold, just my face though. I had a warm sleeping bag and was freezing everything else. I was up long before either of them (being winter in Alaska, the sun was rising at nine every morning, which is very disorienting for the body) and made another fire. When we were all up, we went to one of my favorite places in the whole world — Resurrect Art.

It’s an old church turned art gallery and coffee shop, and it captures the heart of everyone I take there.

We left full of caffeine and artistic inspiration.

The next day was their last and we got up early to drive to Hatcher’s Pass, known for its skiing and hiking. It was rainy and foggy and I was getting nervous.

“What if we drive all this way and you can’t see anything but the dead trees and fog?”

Both of them were wearing their airplane clothes and they were starting to get wet. I assured them this is the most authentic Alaskan experience they could have — committing to something while being unprepared.

“It’s snowing!” they exclaimed, watching the snowflakes settle into their hair and onto their gloves.

I felt relief. We walked, dodging skiers, to the old abandoned mine. “It’s a winter wonderland!” Sam said, and asked about our favorite Christmas songs.

It occured to me that maybe they didn’t care about the dead tree or the parking lot man or fog. They were happy in the pass. The mountains were beautiful, the snow was falling — they were in Alaska.

They had to get on a plane in a few hours and return to classes and work schedules and roommates, but right now they showed me I lived in an incredible place, even if I didn’t always realize it. Alaska is beautiful whether I think so or not. I think that’s the key to visiting a place — know someone, research wood-burning stoves, trust the Thai food and let Alaska speak for herself.