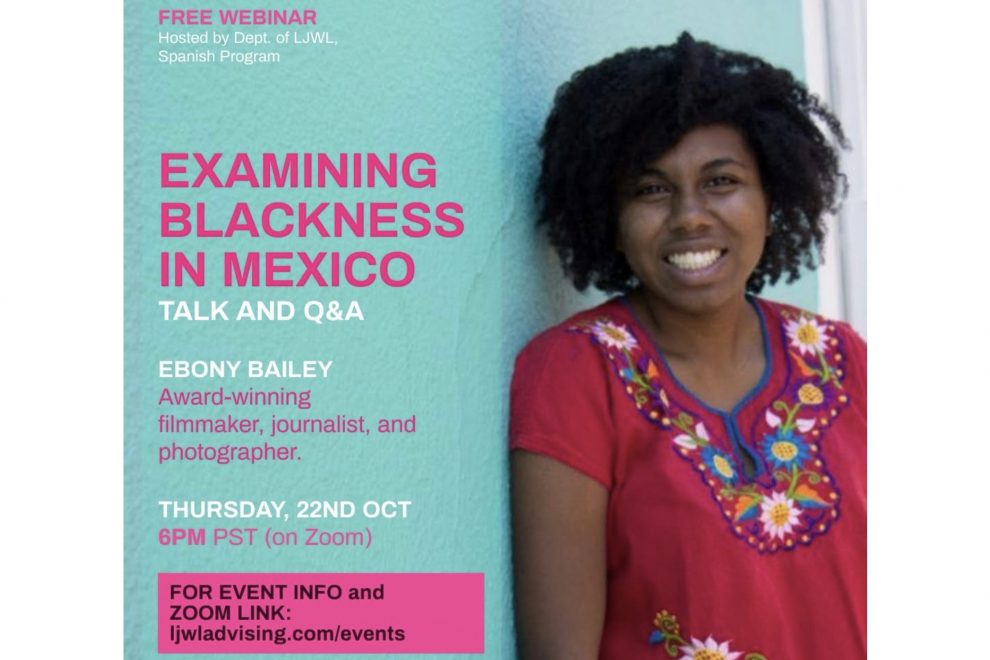 Ebony Bailey is a self-proclaimed “Blaxican.” She gained prominence in short film communities with her films exhibited at the Hola Mexico Film Festival, Haiti International Film Festival, Feminist Border Arts Film Festival and Laupintown Film Festival, just to name a few. On Oct. 22, Point Loma Nazarene University students had the opportunity to attend a Q&A Zoom webinar with Bailey, hosted by the Spanish program of the Literature, Journalism, Writing & Languages department. The purpose of the event was to examine Blackness in Mexico.

PLNU students had access to her film “Jamaica y Tamarindo” during the week of Oct. 22, and her other film “Life Between Borders” can still be accessed through her portfolio website. Both films revolve around Afro-heritage and Black culture in Mexico. While introducing Bailey in the webinar, Spanish professor Jacque Mitchell said Bailey “tells stories through film to build empowerment in diverse communities.”

Bailey presented a slide show about the purpose of the stories she shares. She boiled it down to one reason: “The stories I tell are informed by my background and experiences. Afro-Mexicans, Blaxicans and Black diaspora in Mexico are beginning to tell their own stories, myself included.”

She said, in particular, Black heritage is starting to be recognized through food. The Jamaica flower (Roselle flower in the U.S.) and tamarind plant are both characteristic Mexican flavors, but Bailey said these flavors are actually native to Africa.

It is not just food where we see Black roots go unrecognized. Many Blaxicans are not recognized for their Mexican roots, despite being native to the country. The term “mestizaje” is what most Blaxicans are called. Mestizaje means the process of interracial and/or intercultural mixing. Bailey said the term is the reason for the lack of recognition with Jamaica and tamarind’s native origin.

She said, “The construction of the term ‘mestizaje’ neglected and erased Afro-heritage in Mexico. Blackness does not fit in the national identity of ‘mexicanidad.’”

Rather than recognizing Blaxicans as truly Mexican, they are often called “mestizaje,” which simply says they are mixed, not recognizing their distinct roots and identity as Mexican and Black.

Bailey said, “It is really tiring for Afro-Mexicans because they are always thought of as visitors/tourists,” not natives of their home country Mexico.

Across the border with the recent protests surrounding racism and inequality in the U.S., Bailey addressed and advocated for the Black Lives Matter movement and shared what is happening in Mexico in relation. After the death of George Floyd, Bailey saw “a growing consciousness of ‘no puedo respirar’ [I can’t breathe], that I hadn’t really seen in Mexico before.”

She added, “there are a lot of collectives trying to advance the rights of Afro-Mexicans.”

To change the dialogue surrounding Afro-heritage and Blaxicans, Bailey said the recognition of African culture must be pursued.

“The overall message I want to give out is that these communities [Blaxican, Afro-Mexican, Haitian] have always existed,” Bailey said. “Not only that, they resist and build solidarity with each other.”

To learn more about Ebony Bailey, visit her website https://www.ebonybailey.com