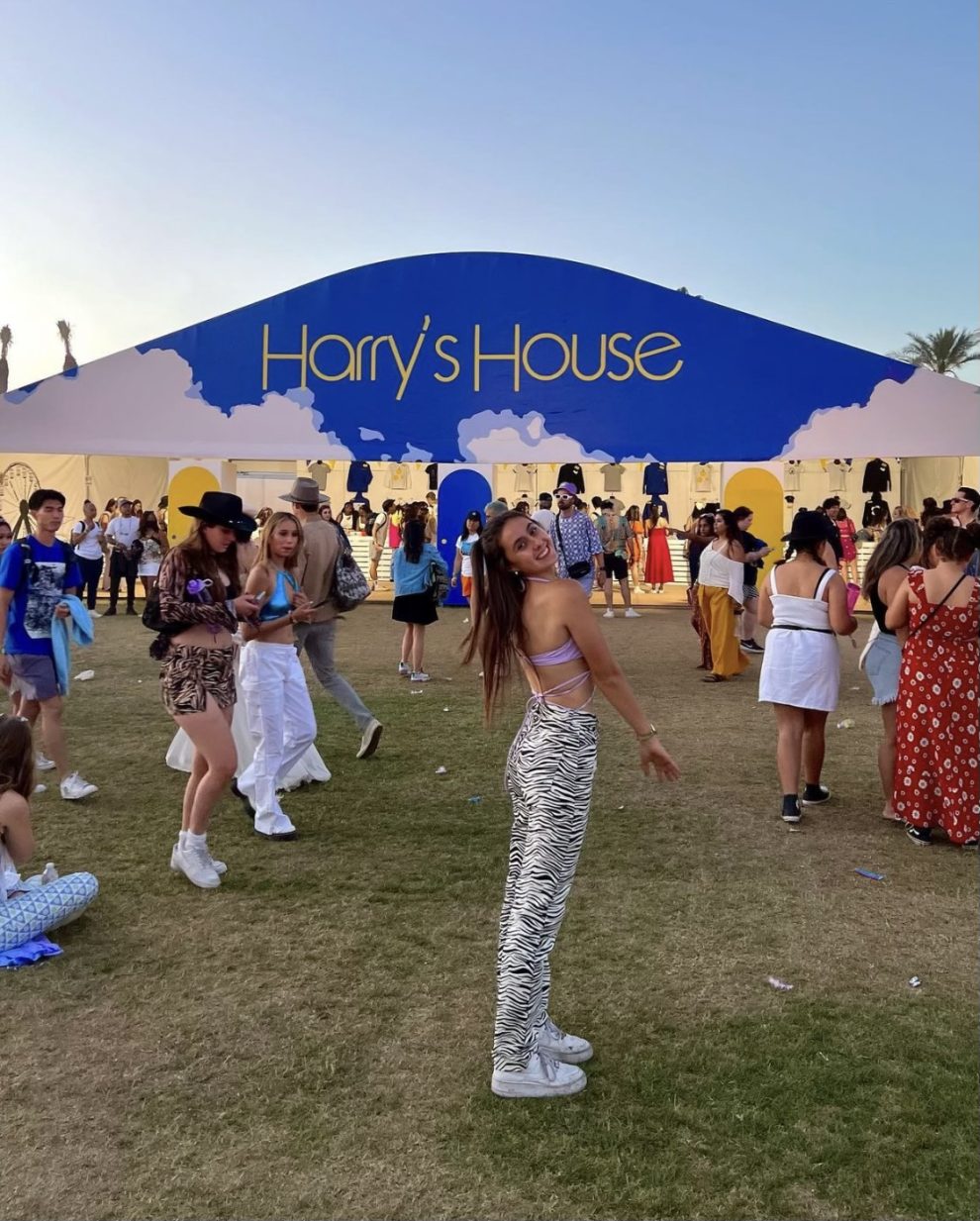 It is around midnight. They have been awake since the early morning. It is scorching. It is windy. They are tired. The music starts. Harry Styles enters the Coachella stage. The music is playing. Water starts spraying on them. They are in shock.

Baptized by Harry, the fans call it.

Becky Rookard, third-year media communication major, calls herself a Harry Styles fangirl. She said at concerts, Harry Styles dumps his water bottle on certain fans and it’s called getting baptized. At Coachella, it was her turn.

“He sprayed the water on everyone and then I just froze because I was like, ‘there’s no way this is real,’” Rookard said. “After the show, I was still in shock. I remember being like I just got baptized by Harry.”

Coachella is not the last time Rookard will see Styles live. Rookard has tickets for five upcoming Harry Styles concerts between Oct. 31 and Nov. 15.

Rookard has spent approximately $1900 on concerts and concert-related costs, like merchandise, transportation and outfits for shows. She will spend approximately $1050 on upcoming concert tickets and costs. The total price came to $2950 spent on past and upcoming Harry Styles concerts.

Rookard said she financed all of the concerts on her own. As soon as she started earning her own money, she said she began saving it for future concerts.

“For the past two summers I worked two jobs and saved most of it,” said Rookard. “As soon as this tour was announced, I was prepared to spend the amount I did.”

Rookard said she felt emotional when listening to Styles’ music. The first time she heard Styles’ latest album, “Harry’s House,” she cried. His music has gotten her through hard times, she said.

“‘Fine Line,’ which is his second album, [is] definitely my favorite album,” Rookard said. “It got me through quarantine.”

Rookard also described how her mental health suffered when she thought she may not be able to attend Styles’ concert.

“I had a full mental breakdown the day before because I didn’t have tickets,” said Rookard. “So day of I bought a $300 ticket to sit by myself.”

Rookard recalled being nervous to sit alone at the concert because she has social anxiety in public; however, she said, the experience was a positive one.

“I feel like since then my social anxiety has gotten better,” said Rookard.

Rookard enjoys Styles’ music, but she said his persona has made her feel more connected to him.

“It’s because of him that I like his music,” Rookard said.

Rookard said she appreciated how much Styles has grown as a person. She said Styles went from a frat boy in his previous boy band, One Direction, to a guy who doesn’t care what anyone else thinks.

Rookard’s friends and family said they see her as a fangirl. Rookard’s friend, Emory Gaines, who attends Styles’ concerts with Rookard, said Rookard is known for her love of Styles.

“I don’t think I know anyone who loves Harry more than Becky,” Gaines revealed. “He is such an important part of her life and has been pretty much since I met her. I’m sure she would drop everything for a chance to see him, and I don’t blame her.”

Zoe Rookard, Becky Rookard’s sister, said she understood why her sister commits so much time to Styles’ concerts.

“Becky’s obsession with Harry can be excessive at times – but as a former Jonas Brothers fangirl I get it,” Rookard said.

Rookard admitted that attending the concerts gives her a high.

Chaz Celaya, assistant professor of music and director of commercial music at Point Loma Nazarene University, said that music is a unique form of art for viewers.

“In that, we don’t see the fanaticism with sculptors or with painters per se,” said Celaya. “There’s something about the music and the way that it makes us feel. It impacts us in a very immediate way. If music is done well it incites a reaction, it incites a response. That’s kind of the gold standard.”

Celaya explained that music is designed to produce impact. There are certain notes and structures musicians can use to create specific feelings.

Celaya acknowledged that live music has a particular effect on audience members. Audience members can physically feel the sound pressure changing in the air and vibrating through their bodies.

There is also a community aspect to live concerts to consider, explained Celaya. There is a lot of investment from audience members. They paid for the tickets, transportation and sat through traffic and security lines to get there.

“When you have that in a room and possibly a large room and a lot of people feeling that excited with that much expectation then when it happens there’s that’s much more of a reward,” Celaya said. “If everyone’s singing and united then yeah it’s much more euphoric.”

However, that feeling a person may encounter at a concert is bound to fade.

“I think after any sort of emotional peak there’s always the flip side of that,” Celaya said. “You can’t hit that sense of height and not come back down on the other side. You can’t stay up there.”

Rookard said she expects to feel emotional after the marathon ends in November.

“After this I don’t know when I’ll see him next,” Rookard said. “I’ll probably be sad after these ones.”