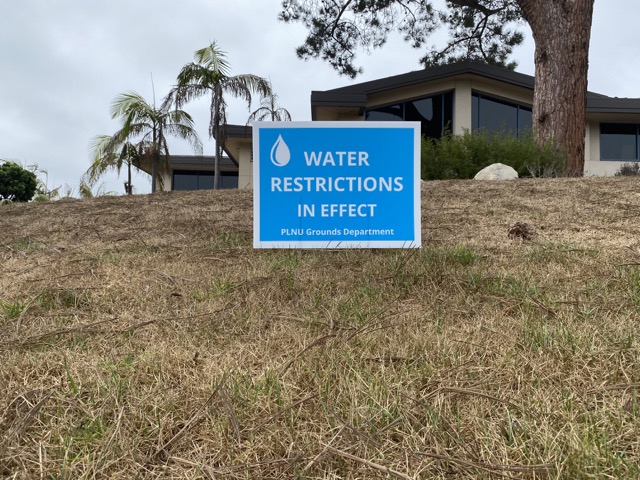 The grass is not always greener on Point Loma Nazarene University’s campus. Lawns on campus have recently been left unwatered due to water restrictions and drought in California.

Johnston said the blue signs helped her understand the unwatered lawns and saw the restrictions as a necessary step for the community.

“I feel like ideally they would be watered, but it’s a good sacrifice to make in order to conserve water,” Johnston said.

The decision to post the signs stemmed from Michele Navarro’s, PLNU horticulture and grounds manager, desire to help inform and spur questions among the Point Loma community, including PLNU itself and the surrounding neighborhoods.

“Hopefully, it spurs [students] to do a little investigative work, ask questions, or become self-aware and decide [they’re] not going to take a 20-minute shower,” Navarro said.

The water restrictions took effect on June 10, 2022. The restrictions will expire on June 9, 2023 if there are no further changes or updates to the executive order. According to a media release from the California Environmental Protection Agency on May 24, 2022, water restrictions were put in place to combat water shortages.

According to Navarro, the drought can be attributed to snowpack and rainfall.

“The drought is normally indicated by the snowpack in the Northern Sierras and the amount of rainfall that accumulates during the course of a year, and we are far below what we would normally get,” Navarro said.

Within the second tier, institutional and commercial locations are banned from watering turf lawns.

“Our [turf] lawns have always been regarded as a high water use plant material,” Navarro said.

Despite the water restrictions, there are select lawns on campus that are still watered. This is due to exemptions from the restrictions. Navarro said there are exemptions for turf used for recreation. These exemptions include PLNU’s soccer field, baseball field and the Early Childhood Learning Center playground. Lawns typically used for events can also be exempt. These lawns include The Greek lawn, the Golden Gym lawn, the alumni lawn and one lawn at each PLNU residential hall.

“I think it might have hit people a little harder this time because the media itself is so widespread now with social media and all that kind of stuff. People can look at a webcam of the reservoirs and see their drastic changes over the last year,” Navarro said.

Navarro said she and the Department of Grounds Management have discussed options for long-term solutions that do not use as much water as the current lawns.

“We have had discussions regarding putting artificial turf in different areas. It is costly in the beginning, but when you weigh it out over time with the water, manpower for mowing, cost for fertilization, obviously in the long-run it pays for itself fairly quickly,” Navarro said.

One area she saw potential room for saving water was strip lawns. Strip lawns are small areas of turf that could easily be removed and replaced with different plant materials.

Not all lawn alternatives are conducive to the unique environment of this campus.

“We have to be careful in this area because some of those different types of lawn substitutes aren’t conducive to the type of weather we get here. This is a very microclimate area,” Navarro said. “It makes it difficult to source out different types of turf that will actually flourish here.”

There are also unique challenges to alternative lawns on a university campus with high foot traffic.

“Some of these [alternative] lawns are what they call light use. So yes they’re great, but they only take light traffic,” Navarro said.

Navarro said the duration of the water restrictions will determine the Department of Grounds Management’s next course of action.

“I think, as a student, taking the time to become aware of why and what is going on around you is probably one of the most beneficial things you could do for the environment, the university, and yourself,” Navarro said.

“We (the scientific community and responsible citizens) already know that we will be seeing more water restrictions and more wildfires as we move forward to 2100, and it is because of the relentless march of climate change,” Mooring said.

“I think we would all like to think that better technology will somehow rescue us from our environmental crisis and allow us the luxury of sitting back and doing nothing,” Mooring said.

“Unfortunately, long-term solutions to drought and climate change and environmental devastation will actually require us to roll up our sleeves and make some changes (even sacrifices) in our lifestyles.”

Mooring listed some ways to reduce a person’s footprint on the environment. For example, he said to take shorter showers, turn the water off between uses, turn turf lawns into xeriscapes, use alternative modes of transportation and buy local foods. A xeriscape is landscaping that reduces the amount of water necessary.

Mooring said there must be a change in mindset of California residents.

“And get used to being very frugal about water use, we are living in a desert for heaven’s sake!” Mooring said.

“One of the coolest parts about my role is that I can be a liaison for sustainability on campus, and that’s something I plan on devoting a lot more time to once this event [Creation Care week] is over,” Cloyes said.

She felt that this connection was important because many students have knowledge and passion for sustainability but are not connected to sustainability-associated administrators on campus.

More information about the Department of Sustainability can be found on their website: https://www.pointloma.edu/offices/campus-facilities/sustainability.