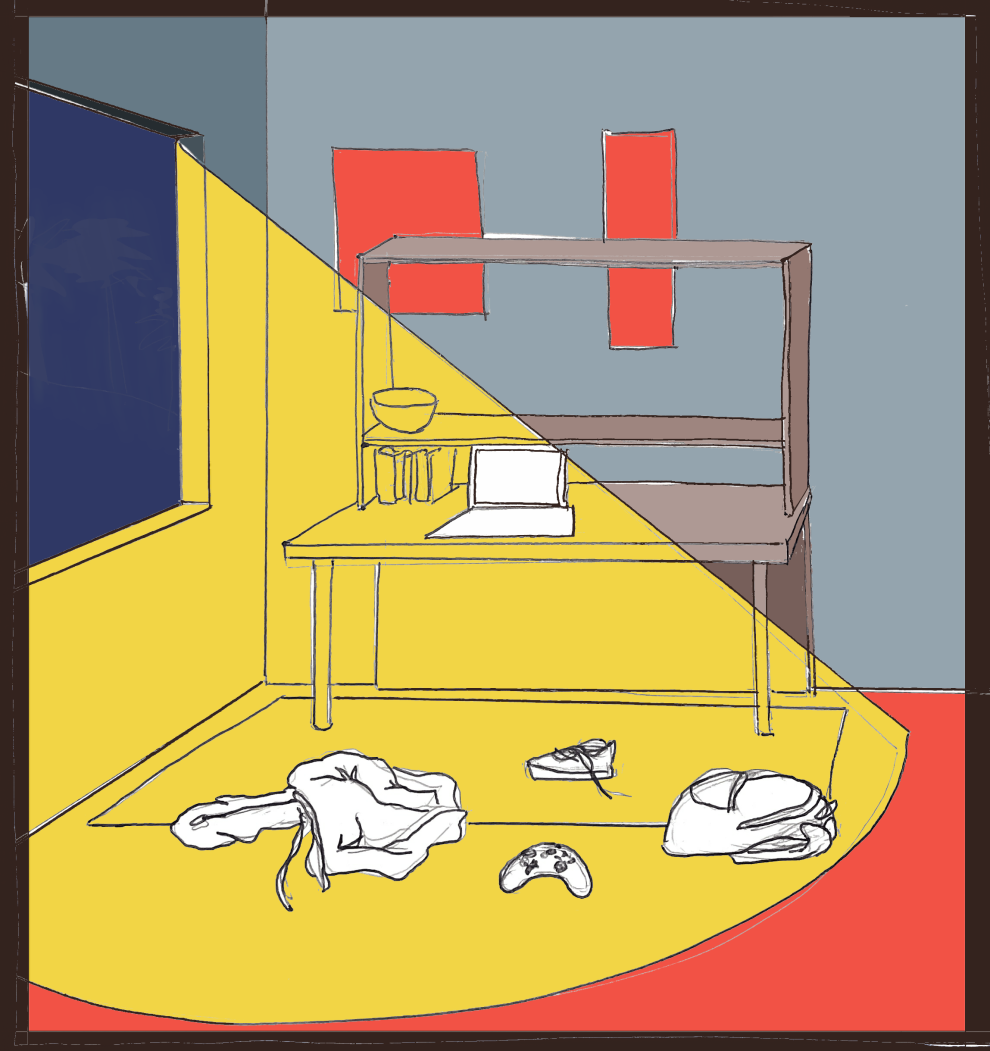 As a disclaimer, the writer of this story was a resident assistant in Hendricks Residence Hall at the time of incident.

When Thomas Kinzler arrived, like he did every day, at Hendricks Residence Hall at 7 p.m. on March 31, the door to his dorm was wide open. This had never been the case before.

His then-roommate, Point Loma Nazarene University then-first-year business major Tyler Herzog, was not there. The sweatshirt that was hanging on the end of his bed and his pillowcase were also gone.

The first-year applied health science major did not think much of it and went to the restroom. ‘Twas the night before April Fools’. Living in a hall among other freshmen males, Kinzler figured there were some tricksters scheming ahead of the holiday.

While in the bathroom, he got a phone call. It was Herzog.

Now, it seemed like a little more than a prank.

The search began once Kinzler returned to his dorm. A Patagonia jacket, Beats earbuds and three pairs of sneakers were added to the list of missing items.

One particularly sentimental item for Kinzler were his first pair of nice shoes, Jordan 3’s, a gift from his dad worth $400.

Herzog noticed that his laundry basket of thrifted clothes and XBox controllers were missing as well and the boys immediately texted their hall’s group chat.

That is when the messages came flooding in. At 4:58 p.m., multiple residents saw two men enter the hall, seemingly in their older twenties. One was wearing a teal, hooded sweatshirt, while the other had a purple button-up shirt. They went upstairs to the second floor, an all-boys floor, and exited the building at 5:04 p.m.

Once the roommates collected the information from their peers, it was 8 p.m. They connected with PLNU’s Department of Public Safety (DPS), who pulled up video footage of the two suspects.

Later that night, DPS sent an email to all PLNU residents detailing the incident. The suspects arrived on campus in a blue Subaru Impreza hatchback with tinted windows, license plates removed. Once arriving at Hendricks, they tailgated a resident into the hall, as the doors require a university-distributed key card, and directly went to the boys’ floor.

They thought this through. But how did they get onto the private university’s campus?

PLNU is a private Christian liberal arts university located on the secluded peninsula of Point Loma, bordered by the San Diego Bay and Pacific Ocean. A palm-tree lined road, surrounded by million dollar bungalows, leads to the singular vehicle entrance of the university. The university’s Welcome Center is to the left of this entrance and is operated 24/7 by a DPS officer.

With an officer to the left, a gate arm is to the right, which remains open during PLNU’s office hours.

Kaz Trypuc, assistant director of DPS, said that the gate is dropped at night so officers have additional time to screen through incomers.

Despite the sheltered entrance, the City of San Diego requires the university to maintain a public right-of-way.

PLNU’s campus includes a city parking lot where visitors can access Sunset Cliffs Natural Park from 4 a.m. to 10 p.m., a popular site for locals and tourists. To get onto the campus, PLNU-affiliated individuals have a parking permit distributed by the university. All other incomers must obtain a one-day visitor parking permit. Members of the public do not need to use the city-owned parking lot. There are other times –such as during concerts, athletic matches, or Homecoming activities– when the university does not require visitors to display parking permits.

The suspects arrived on campus during office hours, meaning that the gate was up.

And so how did they get into the dorm?

Kinzler and Herzog’s door. It was unlocked.

The first of the doors on their hall that the unwelcomed men unlocked, to be exact.

The roommates kept their door locked for the first couple months that they lived on campus, but began leaving it unlocked as they became familiar with the other residents in their hall.

“We would go in and out of each other’s rooms all the time and it was a lot more convenient to keep it unlocked,” Kinzler said.

Herzog figured that people inside of Hendricks Hall would either be students or be connected to students.

“We never had a reason to doubt any of the students in the hall,” Herzog said.

The total cost of the missing items penciled out to be over $3,000. The roommates were encouraged by DPS to report the theft to San Diego Police Department (SDPD). This was Kinzler’s first ever encounter with the police.

After Kinzler reported the incident, the roommates called SDPD and were told that the police would come “soon.”

Soon resulted in a restless night for Kinzler and Herzog.

“By Friday, the assistant director of DPS worked around and spoke to the chief of police and he said that they were looking up the report and lost it. And then fifteen minutes later, they said that they found it,” Herzog said.

The only SDPD officer available, from the Homeless Outreach Team, was sent to Hendricks Hall Saturday morning. After taking separate testimonies from the roommates, a detective was assigned to the case.

At this point, the theft was out of Kinzler and Herzog’s hands, but not their minds.

Now when Kinzler walks into Hendricks Hall, he checks around him to make sure that no one is going to grab the door behind him.

“I question if I was being watched,” Herzog said. “I am a little more observant now.”

As of PLNU’s 2021 Annual Security and Fire Safety Report, a document required to be released by schools receiving federal funding in agreement with the Clery Act, one burglary was reported in a residence hall in 2020. This is less than other private Christain universities in Southern California. The University of San Diego and Vanguard University reported two, and Azusa Pacific University reported five burglaries in residence halls that same year.

The palm-tree lined road, million-dollar mansions, security gate, and key cards give the illusion that campus is untouchable to crime.

“I feel like this campus is a bubble and you see the real world where there are not great people who are out in public. I never thought [theft] would happen to me personally,” Herzog said.

On June 3, Herzog and Kinzler, now second year students at PLNU, each received phone calls and emails from a SDPD district attorney. Both suspects had been caught and plead guilty to burglary and breaking and entering, resulting in Herzog and Kinzler not needing to go to court to testify.

“It did bring a sense of closure,” Herzog said. “But I am still very bummed out about not being able to get our stuff back.”

For students to keep both themselves and their belongings safe, Trypuc has a few recommendations.

“Make sure you have PubSafe’s phone number saved in your phone and call if you need to report any suspicious activity,” Trypuc said.

Students are also advised to have their personal phone numbers connected to their Workday accounts so they can receive messages from DPS in university-wide emergencies.

To avoid the most common types of campus crimes, property crime and theft, students should lock their dorms when not occupied, secure their belongings and not prop doors open.
Students can contact PLNU’s Public Safety via phone at (619) 849-2525 and publicsafety@pointloma.edu.