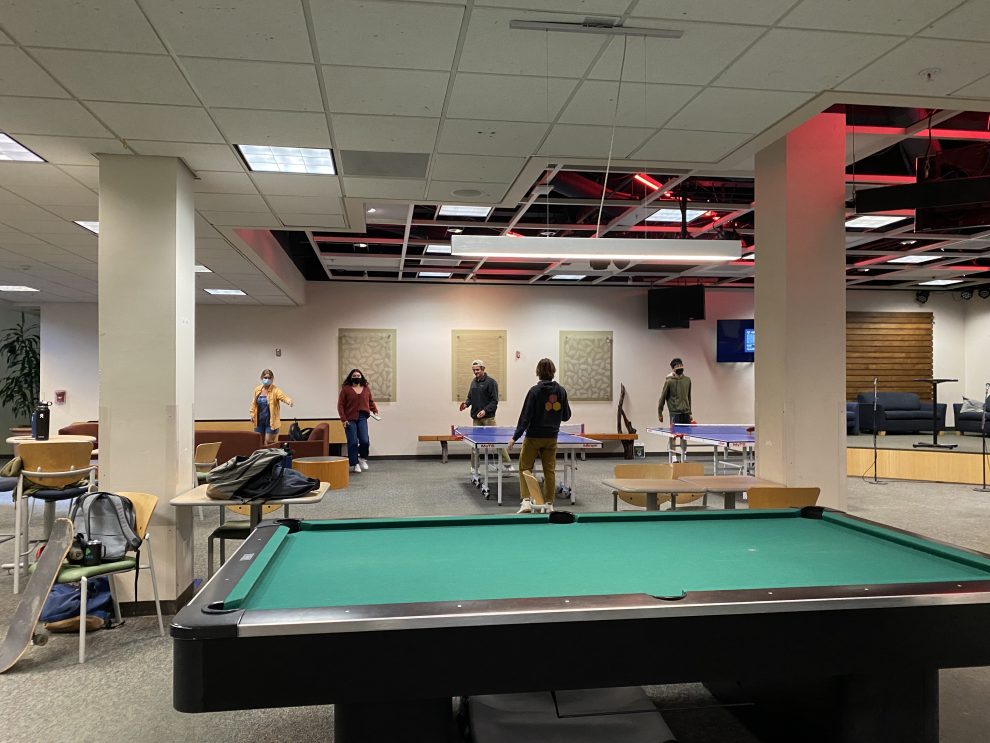 As students on Point Loma Nazarene’s campus make the daily morning trek to the cafeteria, there is an awkward moment prior to scanning their meal plan card that holds up the rest of the line. They stop in front of the kiosk and scramble to find a mask in their backpack. The staff working there will point them towards the clear box to the left of the kiosk with a stack of blue masks waiting to be worn by students who’ve forgotten their mask, lost their mask, or just intentionally did not bring one.

We’ve all adjusted to talking louder and, often, repeating ourselves. We’re used to wiping the awkward bead of sweat on our upper lip. We’ve even discovered these rectangular pieces of cloth can match an outfit or make a political statement. Masks have become a part of our everyday lives. However, whether masks are being worn up to PLNU’s code of conduct is up for debate.

On a Christian campus like PLNU, mask-wearing and vaccination status has been a highly debated topic rooted in the polarizing sides of politics and even religious beliefs. This semester, PLNU has maintained vaccinations will not be mandated; however, mask policies remain a necessity for all.

In classrooms and the Caf, these rules are followed by almost every student; however, in the weight room, Brown Chapel, the ARC, dorms, and other communal spaces, it becomes more ambiguous whether mask policies are efficiently enforced and followed. Jake Gilbertson, dean of students, said that enforcement of mask policy is specific to each department.

“It’s really down to each department to figure out how to best enforce it,” said Gilbertson. “There’s been learning moments along the way.”

The current policies have come a long way since first creating COVID-19 masking rules  as more research and “learning moments” have occurred.

“There have been a few events where we’ve been like ‘We didn’t do a good job of masking. We need to circle back and find a new way to encourage this,’” said Gilbertson. “Luckily, we haven’t seen a huge spread or spike in numbers because of that.”

PLNU’s current numbers convey that the transmission rate has been low. The highest number of positive on-campus cases (19 cases) happened during the first week of school when a large influx of students across the country traveled to PLNU. Since then, cases have gradually decreased. As of Oct. 8, there were only two active on-campus cases.

Most of the cases were caused by off-campus transmission, according to Gilbertson. However, the comfort levels of students are wide-ranging. The weight room on campus is frequented by many students who aren’t wearing their masks very stringently, while in the library, most students are fully masked and socially distanced.

Roz Larson, a junior human health and performance student, works for intramurals in the weight shed. However, I met her the one night she was covering a shift in the gym.

“When I was working, I was with [another student], Josh, and he was in front of me and I had the masks,” said Larson. “He was telling [other students], ‘Hey guys, you need to wear a mask.’ And [I said to the students], ‘Here’s a mask if you don’t have one’ — even though they’ve got one at the door and aren’t wearing it. It was kind of awkward and I feel bad for telling them to wear a mask, but it is what it is.”

Walking the fine line between enforcing mask policies on campus and giving people space with the hopes they will follow through with the honor system has been difficult for both students working on campus and faculty alike.

“Right as we walk away, I feel like they would just take it off,” said Larson. “We had to tell them a few times and they just didn’t really listen.”

In other spaces like the music department, mask policies have presented some questions about how they impact students’ learning experiences.

Professor Keith Pedersen, a PLNU choir conductor, said, “Part of what we do as conductors is not only by what we hear but what we see: How are the students shaping their mouths? How are they breathing? When you can’t see their mouths, that takes away one of the feedback modalities that we as conductors have. Then, when you add the fact that the sound they are creating is muffled by the mask, that’s a challenge.”

The choir department is working on getting masks specifically made for singing and they don’t plan on letting up on mask enforcement in their classrooms, according to Pedersen.

“We do know that singing, in particular, is a very high transmissible environment,” said Pedersen. “The virus has been very successful in transmitting in choral situations.”

With cases like the one that happened in Washington a year ago, music faculty have been taking precautions seriously.

Although restrictions seem to be relaxing in other areas as vaccines and boosters are becoming more widely available, in places like choir, COVID-19 is still a serious concern.

“We can’t know how our actions affect other people,” said Pedersen. “But often when you help other people, you end up helping yourself. If we put on our masks or if we decide to get fully vaccinated, we’re taking the steps that we need to, not only to keep other people from getting sick but to provide ourselves with the experience we are paying for at PLNU — open interaction and face-to-face education.”

Elsewhere on campus, Gilbertson said policies will remain at least through the rest of the school year.

“We’re counting on seeing a spike [in cases] in January and February,” said Gilbertson. “That season always tends to cause a slight increase in the number of cases both with the flu and COVID-19. Part of the challenge is that if we loosen up on guidelines too significantly in a season when cases are likely to be increasing, we run the risk of that increase being larger than we want it to be.”

Girls Club: An Inspired Answer to Boys Club
The Birth of a Loma Legend