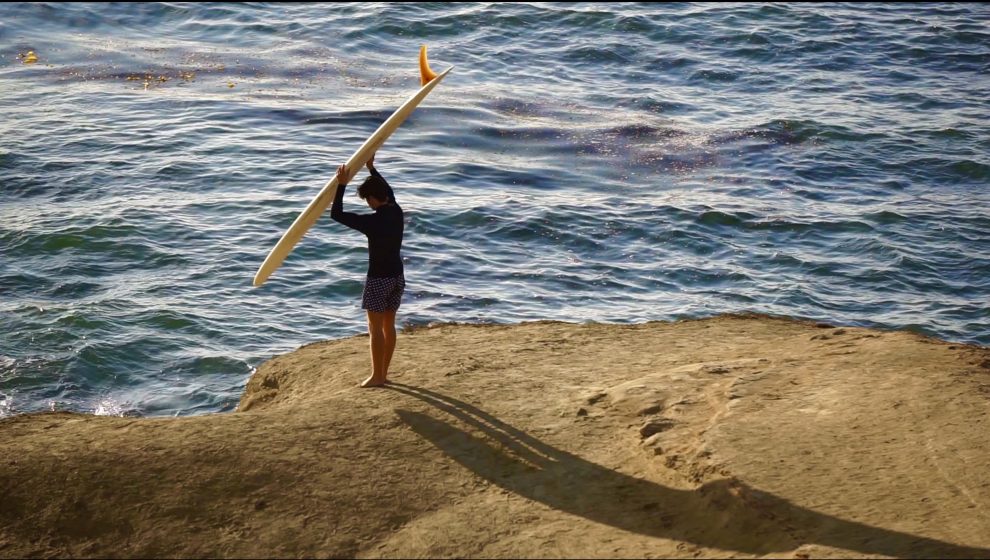 Scroll to the bottom of the page to watch the broadcast package.

Year after year, PLNU appears on numerous websites as one of the top surf colleges in the nation. That recognition is a no-brainer, given PLNU’s killer surf team and the university’s main attraction: the Pacific Ocean.

In fall 2020, PLNU launched a new elective titled The History and Culture of Surfing. Professors Ben Cater and James Wicks co-teach the course, which can be taken for two upper-division history or literature credits. Between the immediate success of the class (30 students from a variety of majors are enrolled) and PLNU’s vibrant surf culture, rumors surfaced of a surf studies program coming to the university.

According to Cater, dean of foundational explorations, a surf studies major would be a specialized liberal arts degree with a unique PLNU perspective. He said an interdisciplinary surfing major would prepare students for a number of career paths.

“If all of the studies on employment for recent graduates are right, majors are irrelevant,” Cater said. “90% of recent graduates do not go into a field directly tied to their major. Disciplinary purity is not the future; it’s not even reality.”

Cater and Wicks agree surfing could be a great means for teaching students about a breadth of academic subjects.

“Surf culture and history is an established academic discipline that is as rich as any tradition,” Wicks said via email. “It warrants our attention and analyses in terms of gender, ethnicity, class, transnational connections, art, kinesiology, theology, business and politics.”

Cater pointed out the geographic advantage of being close to the coast and having access to quality waves for surfers of all levels. PLNU’s location presents an opportunity for a unique hands-on learning experience.

“Since the early 20th century, which is when surfing [became] a sport that’s embraced by the popular mainstream, Point Loma has had a starring role,” Cater said. “Duke Kahanamoku surfed Ocean Beach. Beginning in the mid-20th century, we’ve had quite a few pros and really important shapers come out of Sunset Cliffs.”

Dean of the Colleges, Jim Daichendt, said he was aware of the whispers about a possible surfing major, but there has yet to be a formal proposal. He said the idea is exciting, but developing a surf studies major would come with challenges, such as figuring out how the program would fit into the university as a whole.

“You have to find a department or an area to tie it into,” Daichendt said. “It’s usually helpful to have it owned by somebody, because then it ensures longevity.”

Again, Cater emphasized the importance of interdisciplinary education, pointing out that significant topics, such as public health and race relations, “defy departmentalization.”

“You’re going to use your major, but likely in different ways than you ever anticipated,” Cater said. “You really have to be prepared for anything.”

Another challenge in the creation of a new major or minor is gathering the resources to sustain a new program.

“Who could teach it?” Daichendt asked. “Do we have the expertise on campus? Is there enough student interest?”

These are questions that must be answered in the proposal process. A new major or minor begins with loose pitches from students and faculty, which might initiate market research and peer analysis to evaluate the demand for the program and determine if PLNU has the resources to sustain it. According to Daichendt, this part of the process is extremely important, especially for a brand new program.

“Pioneering is wonderful, but you certainly don’t want to pioneer something that is definitely a dud,” Daichendt said.

Once an idea is crystalized into a formal proposal, the Academic Policies Committee and the Strategic Enrollment Committee review it. If each committee approves, the proposal can move on to PLNU faculty for a final vote.

Daichendt explained that after a formal proposal is submitted, a new major could materialize in anywhere from six months to two years.

According to Cater, the pros of launching a surf studies program at PLNU outweigh the cons. Cater and Wicks both said they expect students and faculty would support the endeavor.

Several students expressed their approval or excitement for a potential surf studies major.

“I think it should be a major because, for some people, surfing is their whole life, just how medicine, basketball, music [or] theology might be for others,” said Christian studies major Trevor Tillman via email.

Tillman is enrolled in The History and Culture of Surfing, and said the class is beneficial to him and applicable to his major as he learned about missiology and its impact on surf culture. The course also allowed him to explore the complex issues of dominance and violence as he learned about the origins of surfing and the conquest of Hawaii.

Rina Hassan, a sophomore managerial and organizational communications major, is also in the class, and agreed PLNU should offer a surfing major.

“A lot of my friends want to eventually work in the surf industry,” Hassan said. “That would be so helpful to graduate with a major in surfing.”

Junior chemistry major Jacob Baer said he thinks PLNU should consider developing a program for it.

“I think integrating the major/minor would make PLNU even more unique and students would take the opportunity,” Baer said via email. “As we’ve touched on in class, Southern California really needs some education on the topic. Surf culture, in my opinion, has gone downhill in several aspects and I believe that a surfing major/minor [could] go about changing that.”

Though he wouldn’t change his major, Baer said he learned a lot from The History and Culture of Surfing.

“Dr. Cater really challenges the class to think critically about the material, especially about the evolution of surf culture,” Baer said. “This aspect of the class — critical thinking — is what I think is preparing me for my career.”

According to Cater, Wicks and Daichendt, students need to speak up if they want to see a surf studies major become reality.

“I think it’s great when students express their interest in particular areas of study, to their mentors, to their faculty, to their advisors,” Daichendt said. “Sometimes you feel as a student that your voice isn’t being heard, but it’s so helpful. We want to make our degrees exciting, so I don’t think there’s any inclination to say, ‘No way.’”

Attention First-Year Students: Food for Thought
How to Have a Social Life as a Freshman