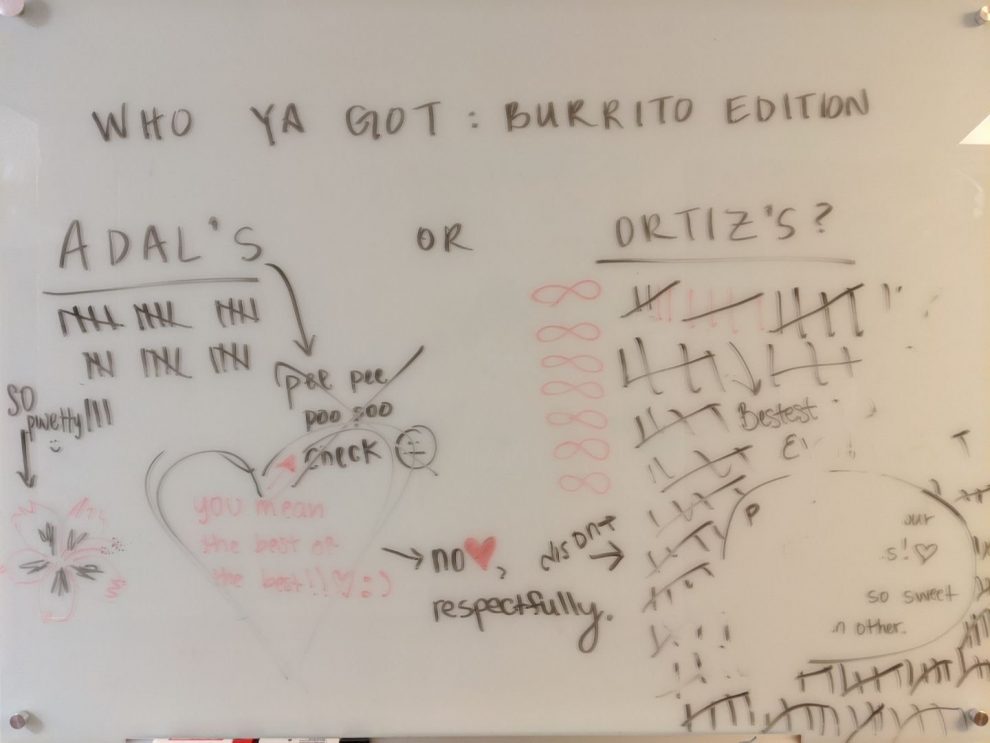 In the Young dormitory hallway at Point Loma Nazarene University, a whiteboard displays a poll of the best place to get burritos near campus: Adalberto’s or Ortiz’s. There were 30 tallies for Adal’s and a copious amount of illegible tallies in support of Ortiz’s. As a student who has never been to either establishment, I assumed Ortiz’s is the place to be, because apparently students say “no, respectfully” when offered an Adal’s burrito. This got me thinking about which are the best places near PLNU to get food. First-year students can have their cars this semester, so if they get tired of the Caf, where should they go? Here is what three upperclassmen had to say.

Fig Tree Cafe — Fig Tree Cafe is a favorite of Carli Lugo and is located in Liberty Station. She shared, “they have a meal where you can pick three different types of their french toast. So good!”

The vote was unanimous: Filippi’s Pizza Grotto — Located in the heart of downtown San Diego’s Little Italy, traditional Italian pizza, pasta and salad are all on the menu. Campos likes getting “The Works,” a pizza with mushrooms, onions, pepperoni and sausage, and is big enough to share with friends. Likewise, Deluca said, “It’s a great place to get a slice of pizza while walking in Little Italy.”

Cafe Coyote — “They have the best Mexican food imaginable and they have someone that makes tortillas at the entrance. They are easily the best tortillas you’ll ever have. I always get their shrimp tacos,” Deluca said.

For a good burger:

Hodad’s, another unanimous decision — Campos said, “What makes Hodad’s is the grungy surfer environment, the good memories and great milkshakes.”

For a carb overload:

Azucar — This Cuban bakery in Ocean Beach is where Campos gets chocolate cake, which he described as delicious.

Con Pane — When asked, Lugo said, “Definitely Con Pane! It has the most amazing cinnamon rolls!”

Deluca is also a fan of the Liberty Station bakery. She said, “This place has the best bread you will ever have! They tragically closed earlier in the year, but praise they are open once again! I always get their chocolate bread.”

For a study session and coffee:

Jennings House, common favorite between Campos and Deluca — Located right down the hill from PLNU’s campus, Jennings House is a popular study spot run by a former PLNU staff member. The coffee spot was a house before it was converted into a cafe. Deluca said, “There’s something special about studying in a cute little house.”

Likewise, Campos said, “It feels like home. You’re just like going up stairs and doing some homework.”

Salt and Straw (a well-known crowd pleaser) — Lugo appreciates the versatility: “What I especially love is that there are unique monthly flavors that you can try in addition to the regular ice cream flavors offered.”

Deluca added, “It is always worth it to try their flavor of the month.”

For a late night snack:

Winchell’s — Deluca summed up an unforgettable memory associated with Winchell’s: “There is nothing that can bond you to your dorm-mates like offering them a warm doughnut during a late-night study session. Some of my favorite late-night memories are renting a zipcar and buying doughnuts for all the girls in my hall freshman year.”

Finally, Lugo said, “I will say that Ortiz’s Cali burritos are so good, and there have been many times where my friends and I grab Cali burritos from Ortiz’s and have a picnic on Sunset Cliffs. Definitely recommend!”