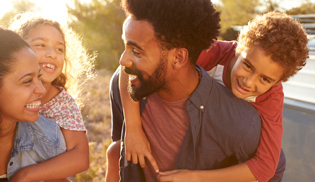 A rainbow-striped Apple Watch peeps from the sleeve of Karsten Lomax’s jacket, generating repetitive reminders that draw out their seemingly never ending schedule as they dash between classes and clubs.

Lomax, second year cinema and media studies and comparative history of ideas double major at the University of Washington, always has a place to be. And yes, they have a minor too: in drama.

Following a ding from their watch, Lomax, who prefers neutral pronouns, looks down and pulls their brown shoulder-length hair behind their ears and clicks mute.

“I clearly hate having freetime,” they chuckle.

Despite their busy life, Lomax shows up with enthusiasm. Their authentic smile and energetic bounce are a rarity within the despondent weather of the Pacific Northwest. But how do they continue to exude such radiance?

Besides the occasional energy drink, the answer is internal peace and healing.

Derived from a combination of self-discovery and coming out, nurturing peers, and dabbling in  therapy, Lomax is content with the person they have become. Their schedule includes a weekly Al-Anon, a support program for individuals who have been impacted by a loved one’s drinking. Lomax’s meetings have been temporarily held electronically during the COVID-19 pandemic via Zoom for Seattle-based members. The meetings have been in Lomax’s schedule for over a year as of February 2021, serving as a resource to gain external support of personal and relational aid for their mother’s alcoholism.

At 19 years old, Lomax is the youngest attendee at Al-Anon. The other 10 to 15 members are non Apple-watch-wearing seniors, who are not as familiar with the digital world, Lomax points out.

“Sometimes some of them don’t realize that we can see their faces and they have some funny expressions. But then again, I do too,” Lomax laughs.

They keep it real, admitting that their age difference produces alternative perspectives and values.

Lomax’s age is the cutoff for Alateen, which is designed for individuals who are 13-19 years of age that are friends or relatives of an alcoholic. Alateen was started in 1957 and there are currently more than 500 Alateen groups across the World Service Conference structure, which is made up of the United States, Bermuda, Puerto Rico, and Canada.

Employed by Al-Anon Family Groups World Service Office is Christa, who has worked with both Alateen and Al-Anon for many years. As a person directly impacted by a loved one’s alcoholism, and raising children in that environment, she became involved in service to teens to provide the opportunity of recovery for them.

In an email interview, Christa explained how the only adults in attendance at Alateen meetings are those certified through established safety and behavioral requirements to provide the knowledge-base of the program for attending teens.

With meetings occurring on a weekly basis, it is up to members to determine how often and how many meetings they attend.

“Many members share that attending at least once per week is helpful. It’s my experience that members, whether adult or teen, seem to have a natural gravitation to others affected by someone else’s drinking,” Christa said.

Since Alateen groups meet in person, the COVID-19 pandemic all but shut the program down, some groups arranging to meet temporarily online.

“That option was not very popular, likely due to all the time [teen members] already had to spend online for school,” Christa said.

Lomax was 18 years old when first joining Al-Anon after being invited by a family friend. Although Lomax’s age qualified them to attend Alateen, they felt that Al-Anon was the best fit.

Lomax has found it easiest to attend Al-Anon’s Zoom-based meetings due to their busy life, though they connect best with others in-person. Both the COVID-19 pandemic and these meetings have helped them appreciate in-person encounters as mandates are being lifted.

To emulate in-person meetings, Lomax keeps their camera on and carves out personal time to be fully present. They do the same during this interview, held over Zoom.

“Even when I’m muted, I’m clapping or hand-signing,” they say with jazz hands. “Just because that is my way of connecting.”

When it’s their time to share in the group, Lomax will go to their residence hall’s stairwell for privacy and share what is on their mind without a designated plan.

“Sometimes I don’t even know what I am going to say. There is some comfort with [Zoom’s] disconnect, being able to share in that private space with no one physically near you,” Lomax said.

With the meeting’s format allowing members to attend from anywhere, there have been instances where Lomax has been in the vicinity of their mother, who is a recovering alcoholic, while in a meeting.

This has hindered their ability to be as open with fellow members. In these cases, they avail themselves to the adaptability of the meeting, not sharing that week, keeping their camera off, and solely listening to other group members.

Al-Anon is a Twelve Step program similar to Alcoholics Anonymous. The overlap has helped Lomax develop a more vulnerable relationship with their mother throughout her recovery.

“Control what you can control and treat others how you want to be treated are things that we’ve [in group] and I’ve heard from my mom. While [these tips] are simple, you really do lose sight of it when you spiral or some bad things happen here and there,” Lomax said.

For other members, their loved ones are not just their parents, but also their children and their spouses. Hearing of estranged relationships between fellow members and their loved ones has motivated Lomax to pursue the relationship that they have with their mother. The sharing of similar stories also makes them feel less alone in the process of navigating their recovery, as members of Al-Anon and Alateen share from their own recovery experience, too.

“At that moment, you know that there are billions of people on earth. In this time I am going through something that someone else has been through and I am not all here by myself,” Lomax said.

Holding hands to their heart, Lomax reflects on the child-like forgiveness that they continue to have for their mother.

“This is your parent, your whole world, you see them as this God-like human because they are your complete salvation. [In these meetings], it’s me realizing that yes, I would do and say anything to keep my mom and my family,” Lomax said.

Over the past year, Lomax has embodied Al-Anon’s teachings of vulnerability, which is depicted on the non-profit organization’s webpage:

“Al‑Anon gives us an opportunity to look at ourselves and understand how alcoholism has distorted our perspective, hurt our self‑image, and affected our ability to develop and maintain healthy relationships.”

“I’ve realized that sharing your heart not only helps you, but helps other people,” Lomax nodded repeatedly. “It is really hard to throw yourself out there, and it is risky, but it is so powerful and shows human connection.”

A roommate opens Lomax’s dorm door, signaling that time is up and that their next class is about to start. Lomax beams ear to ear and energetically waves goodbye, bringing the Zoom to a close.

LomaVintage Brings Thrifted Looks to Campus
Behind the Lens