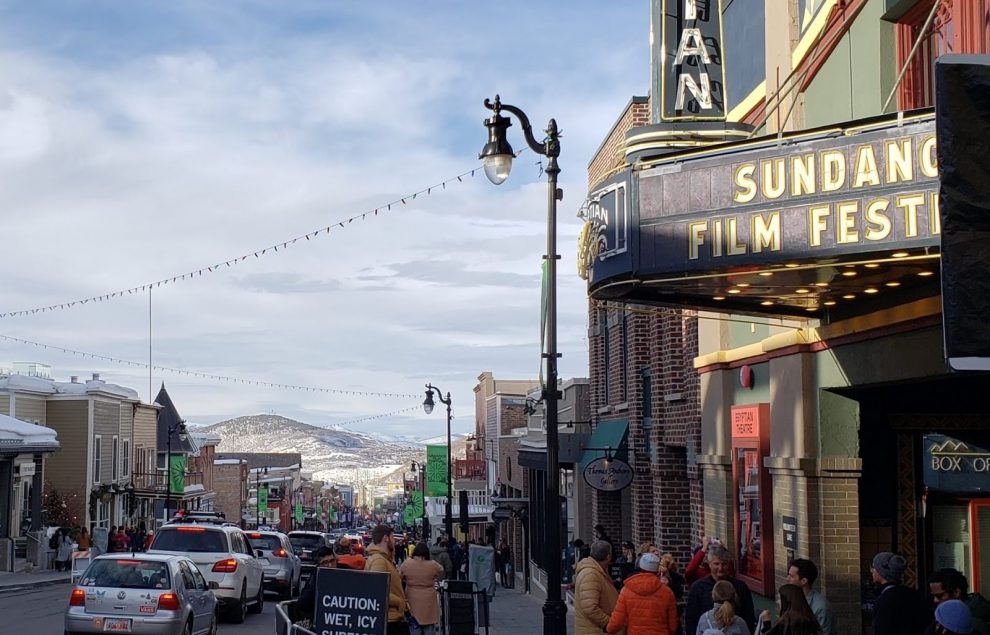 While students on campus are settling into the groove of the spring semester, four PLNU students and one faculty member reflect on their trip to the 2020 Sundance Film Festival in Park City, Utah.

The festival, hosted and organized by the Sundance Institute, takes place every January in Park City and is the largest independent film festival in the United States according to the Sundance website.

Among the 122,000 attendees are film stars, major directors, amateurs and 2,000 volunteers. With bus systems and long lines, Dr. James Wicks, who teaches film studies at PLNU, compares the Sundance experience to a week in Hong Kong or being at Disneyland.

Attendees will wait in line and then “go in and ride,” watching up to 10 shorts in one sitting, said Wicks.

Wicks also teaches literature and is the Chair of the Department of Literature, Journalism, Writing and Languages at PLNU. While Wicks did not initially intend on becoming Chair, he accredits his position to his love of stories, which leads him to events like Sundance.

This year, the 10-day festival took place from January 23 to February 2. However, Wicks and PLNU students flew into Salt Lake, rented a car and drove the 45 minutes to Park City on January 26, giving them a week’s experience at the festival.

“It was my first time attending it, but I had always wanted to go since I was a little girl,” said junior literature major Carmen Flores-Lopez. “I just really love movies and I know that some of my favorite movies have premiered at Sundance. Plus, I might make my way over to film studies and I wanted to stick my toe in the water.”

Flores-Lopez is one of the four students who opted into a specialty Sundance Film Festival course. The PLNU course is essentially a one week, 1-unit field trip that is open to any student, Wicks said. In addition to attending the festival, students join over 200 other Christian students at the Windrider Forum five times that week.

Windrider, according to its website, was “launched as an immersive experience between filmmakers and film lovers, designed to facilitate thoughtful conversation, awaken compassion, and inspire change.”

At Sundance, Wicks ensures you’ll see “some of the most quality filmmaking in the world.” Out of 15,100 film submissions this year, only 118 features and 74 shorts were accepted—each viewed by artistic directors who have full-time jobs of watching films throughout the year, according to Wicks.

Many submissions do not have film distributors and stem from up and coming filmmakers hoping to spark the attention of a big name company like Netflix, Warner Brothers or Disney.

A documentary at Sundance, called “Time,” particularly caught Wicks’ eye. The film followed the lives of an African-American family in which both the father and mother were incarcerated for a time. “I was wrecked,” Wicks said as he recalled the family’s attendance at Sundance: mother, father and their six sons. “I was just crying, and that was Monday morning at nine. I had 14 more films to get through!”

Although Flores-Lopez prefers horror, she agrees with Wicks that Sundance includes a wide variety of films. “I think people benefit from watching films they otherwise might not see,” Flores-Lopez said. “[Films] that feature perspectives they otherwise wouldn’t consider.”

Robert Redford, President and Founder of Sundance Institute, according to the Sundance website, believes in the power of film to effect change “across hearts, minds, and societies,” and can “entertain … illuminate, agitate, and empower.”
To a story lover like Wicks, it’s a life-changing experience where underrepresented communities are seen. Sundance is not a part of mainstream media, but “a place where diverse voices can have a platform,” Wicks said. “It’s so mind-expanding to see that and reflect.” After all, as Wicks puts it, “We’re all lifelong learners.”