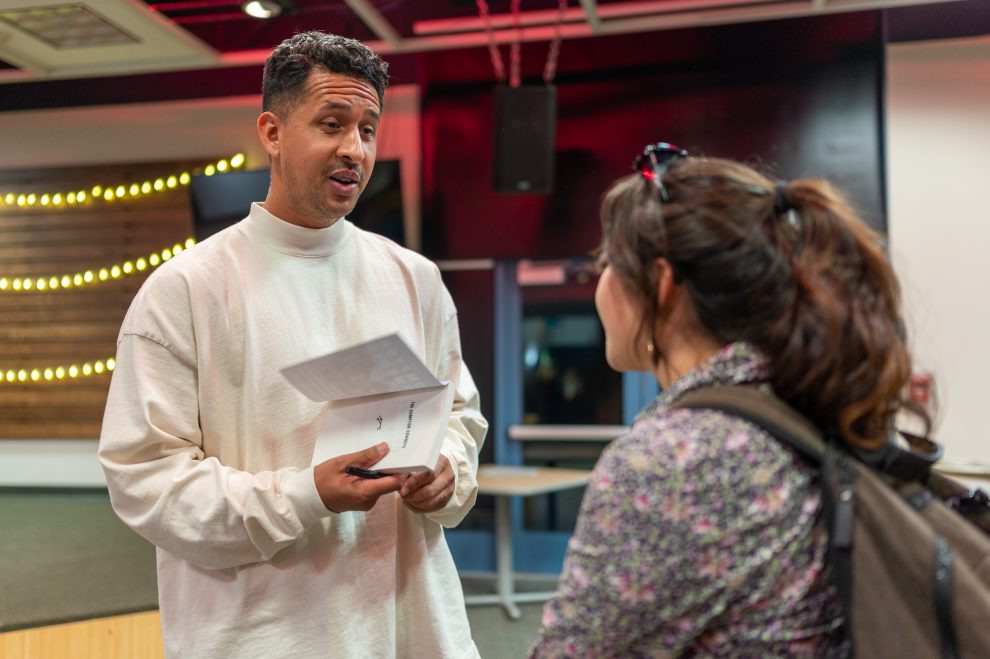 Self-taught filmmaker, director, and author of The Compton Cowboys Walter Thompson-Hernández visited campus on Thursday, Nov. 10, to attend a screening of his award winning short film, “If I Go Will They Miss Me.” The film won the Sundance festival award for best fictional short film in 2022. Hernández is currently working on producing another short film, this one based in Barcelona.

Growing up in Los Angeles, Hernández said he felt inspired by the culture surrounding him. His family and friends meant everything to him. He went to University of Portland for his undergraduate degree (political science) but focused largely on his basketball career. An interest in storytelling led Hernández to purchase a camera – the rest is history. Now carrying with him a passion for cinematography and telling others’ stories, Hernández earned his master’s degree for Latin American studies at the University of California, San Diego and eventually began writing for the New York Times as a global subculture reporter. His story “Inside Japan’s Chicano Subculture” revealed a growing trend that ushered in an expression of Chicano/a culture within Japan.

“I liked how he deliberately chose symbols [in the film] that had multiple meanings representing how he feels and how many others in the same situation would feel,” said Hosoda.

Hernández said his film explored the line between fiction and reality; it stars Lil’ Ant, a young African American boy living in the Imperial Courts projects with his family during January 2020. Hernández said the cast consisted of family or friends, and is based on an experience he lived through as a child where his neighborhood was in near proximity to a toxic jet fuel dump.

“I have a background in journalism, so for me it’s like, this is a fictional film,” said Hernández. “I think first-time actors kind of help us tap into that and it feels honest and it feels authentic. How do you ask someone to play a version of a lifetime that already exists – no one can do that, except someone who lives that life.”

Family ties to his cultural background signified an inclusion of a bonafide cast for Hernández film.

“I know men like Big Ant [father of Lil’ Ant], right?” said Hernández. “Men from the hood who are tough, who are hard for different reasons but choose to pray and love in silence, right, and I think that’s really important because I know people like that.”

Some viewers found meaning in the pegasus and were able to form their opinions about what it entails.

“I really liked the different things it [film] resembled,” said second-year biology major Aliya Valenzuela, “and the importance of the angle that it took.”

The filmmaker said he also found meaning within these symbols.

“For someone like Lil’ Ant, who conceptualizes ideas about flight and escapism through this mythological character, it shows that the pegasus in some ways represents both an other worldly idea about escape but also something grounded,” Hernández said.

In addition to filmmaking and journalism, Hernández also created a podcast “California Love” which takes a closer look at the experience of growing up in LA as an Afro-Latino boy. To learn more about Hernández or view his media, visit his website http://www.wthdz.com

Surf Film “Bloom” to Premiere in ARC
Sharks Near Point Loma: Should You Be Worried?