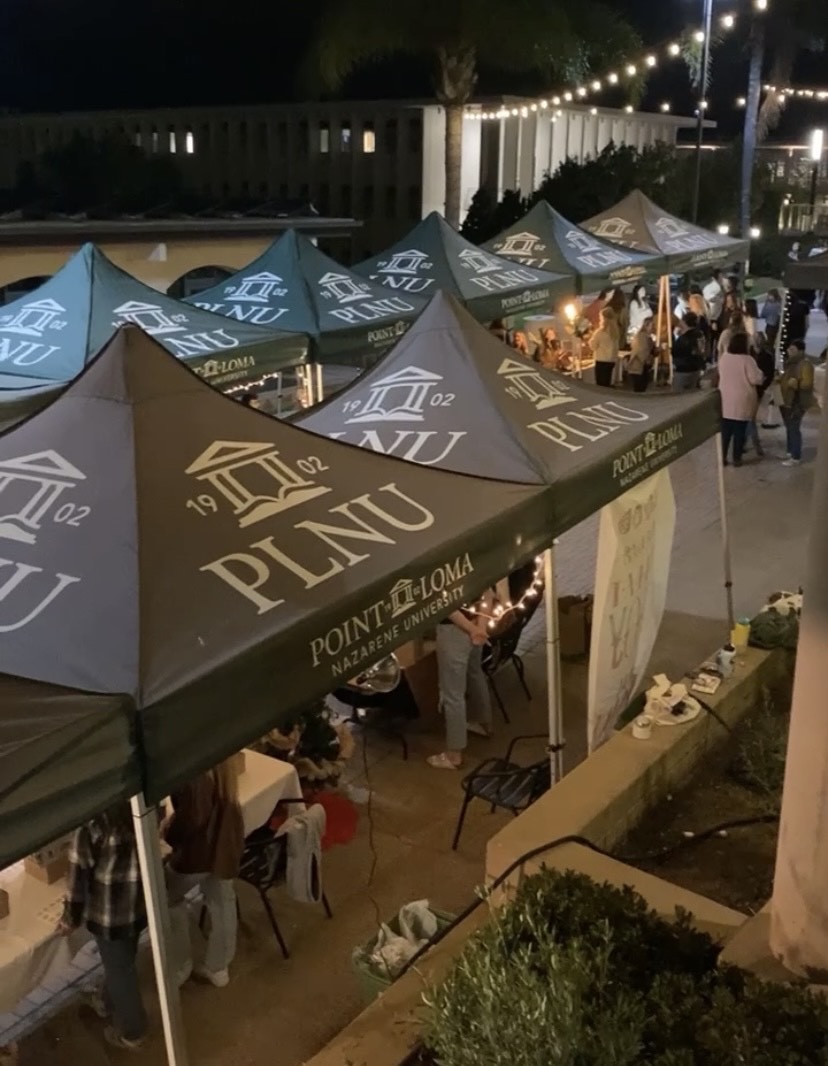 Point Loma Nazarene University’s Center for Justice and Reconcilitation’s Roots of Giving event provides a time for students and the larger community to come together to support ethical and sustainable businesses and products. In the couple months that have passed since Roots of Giving took place, vendors have had the time to reflect on and experience the impact that Roots of Giving has had on their businesses.

Among the vendors at the event were second year students kinesiology major Eve Roche, marketing major Kellyn Gonzalez and bio-chem major Kendall Cherry. All three of their businesses benefited from the exposure they received at Roots of Giving.

Roche’s business consists of buying, recycling and reselling clothing that she describes as “thrifting for other people.” Normally, Roche puts varying numbers of clothing items up for sale on her Instagram account, @eve_goes_thrifting, and then ships them out to the buyers. In the weeks leading up to Roots of Giving, Roche stopped doing her normal drops so she could garner a larger inventory to sell at the event. The event was a huge success for her.

“I was basically sold out after Roots of Giving,” Roche said.

Not only did her business receive a lot of support at Roots of Giving, the support has continued since the event. She has gathered more Instagram followers and interacted with more students and community members who have reached out to her about products.

Due to the immense support she has continued to receive because of Roots of Giving, Roche hopes to continue to expand her business to the wider community.

Gonzalez’s hypoallergenic jewelry business, Sincerely Kellyn, also had immense support at Roots of Giving. Like Roche, Gonzalez sold out of many items at the event which she did not expect.

“I was mind blown. The turnout was amazing,” said Gonzalez.

Since the event, the sales at her Etsy shop, Sincerely Kellyn, have seen a slight increase. Gonzalez credits this to more people knowing about her business from the exposure at Roots of Giving.

The sustainability of Gonzalez’s business was also put on display at Roots of Giving. Second year communication major Kareen Boyadjian has purchased jewelry from Sincerely Kellyn many times, but it was not until Roots of Giving that she understood the importance of the sustainable products she was buying.

“[Sustainability] wasn’t what drew me in at first, but the more I bought from her, the more I saw how the sustainability aspect is important,” said Boyadjian.

The support she received at Roots of Giving gave Gonzalez new passion. It reassured her in her ability to create a successful business and gave her a vision for the future.

“I know what direction I want to take [the business] now,” said Gonzalez.

She is currently working on a new collection of jewelry, exploring the idea of expanding to men’s jewelry and preparing for PLNU’s Homecoming Marketplace.

Cherry, who sells handmade cards, sells exclusively at the markets PLNU puts on. Her card making is currently more of a hobby that she likes to share, but she hopes to make it into something bigger in the future. The exposure she got from Roots of Giving is a good foundation for growing her hobby into something more.

Cherry has sold her cards at the past three Flex Farmers Markets, but did not experience community wide support until Roots of Giving.

“I only sold to five or six people, almost all of them were friends, at my very first market, but at Roots of Giving, I nearly sold out,” Cherry said.

With support for her cards increasing each time she sells, she is looking forward to selling at the Homecoming Marketplace where she will be selling cards and prints based on locations around PLNU.

Cherry had such a great experience selling her cards that she encourages anyone who wants to grow their business or just share their crafty hobby to sell at PLNU events.

“It’s fun to try new things and I really encourage everyone to not be afraid of it,” said Cherry.