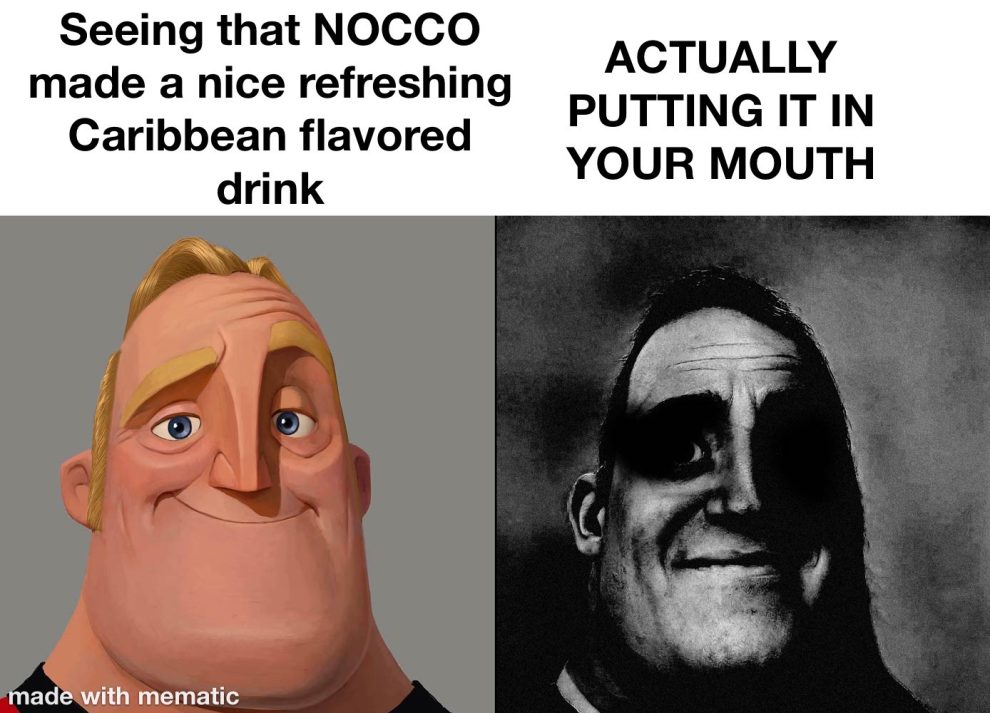 With the looming threat of midterms coming through, it’s time someone takes a stand against quality health advice and advertises some high caffeine products to power through procrastinated assignments. That person is me. Now I won’t call myself a hero, as I prefer the title of savior, and I certainly won’t consider myself a one-man show. So this week, I’ve wrangled the help of our beloved Stupid Cupid columnist and inexperienced energy drink connoisseur, Brennan Ernst, to help digest some less well-known energy drinks. Hopefully when our arteries turn to solid plastic with all the acid swirling around our veins, the Wellness Center will cut us a steep discount.

We picked up this drink because we found it at the local Jensen’s Market, and we had never seen it before. Upon first impressions we weren’t frothing at the mouth to try it. The smell had an overwhelming fruitiness, and so did the taste. We both likened it to a less-gritty Bang, a popular creatine infused energy drink, as it had a bizarre taste that felt like they dumped Splenda in it and finished it off with a nasty metallic taste. It had a decent amount of kick, with 200 mg of caffeine, and had a nice, simplistic looking can that made it stand out from the other drinks. Overall, it was forgettable.

This drink actually impressed me. No, not because of its quality or flavor, quite the opposite. This is the first energy drink that has made me sick to my stomach. In these reviews we tend to only sample a bit of the drink, roughly 1-2 ounces per drink. We do this so that we can get through the drinks in one sitting without having a seizure (just imagine a really trashy wine tasting).

However, after sampling this drink I began to feel a bit nauseous, and had a sour taste in the back of my throat and stomach for about an hour. The smell was the first thing we noticed, as it just about punched us in the face with an aroma of moldy, rotten pineapple, that made both of us involuntarily produce a nasty cough that sounded like an owl throwing up a bone.

The taste perfectly matched it, sickeningly sweet sugar, and an overuse of pineapple that made it a struggle to get through even the two ounces we poured. The only bright spot was when Ernst took the first sip, retched, looked me straight in the eye and said, “Dude, it tastes exactly like toes.”

The can itself was also boring, with an ugly blue on blue design that looked about as fun and exciting as a Delta airlines brochure. It had an adequate amount of caffeine, at 180 mg, but you can find far better drinks with that same amount of caffeine.

Drinking this is like liquid nostalgia, because for me and many of my friends this was the first “energy” drink we could smuggle past our parents, thanks to the Mountain Dew label.

In terms of taste, it’s actually pretty good, but super acidic. It had a nice flavor to it and wasn’t pumped full of artificial sweetener. However, if there’s one thing it lacked, it was a noticeable amount of caffeine. There wasn’t any real rush, and it felt noticeably weak. They compensated for this by adding a massive amount of sugar, with nearly 20 grams of the stuff jammed into the can. This results in a disgusting, full body, energy crash that made Ernst and I feel like we both got the flu.

I can’t recommend this one if you’re planning on doing stuff after consuming it. Save it for the gaming sessions and not the morning drink before finals.

Sundays With Euphoria
Musoffee: Behind The Stage