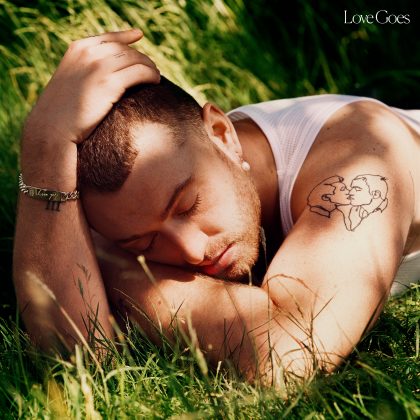 I remember when Sam Smith’s first album “In The Lonely Hour” came out in 2014. It was chock-full of powerful ballads, intimate love songs and a voice of unbridled passion that rivaled contemporaries like Adele. “Stay With Me” dominated the radio and wedding videos for a year, and their performance at MTV Video Music Awards left such a lasting impression I still occasionally see it in my dreams. “Love Goes” is Sam Smith’s third full length album. Running at about 57 minutes, this new LP was Smith’s chance to prove themself as a talented, multi-faceted artist with a vision rather than just a skilled singer, but they fail to reach that superior aptitude.

Since 2014, Sam Smith has failed to release anything as iconic or powerful as their debut album. Their second album, “The Thrill of It All” was a poor transition to pop stardom, and this third attempt falls short of being the intimate pop heartbreak album they intended. The project has isolated moments worthy of notice, but as a whole it lacks any ear-grabbing melodies or memorable lyrics.

“Love Goes” begins with my favorite track of the album, “Young.” The a cappella performance by Smith displays their incredible voice; it’s power and range is fortified by the silence surrounding it and displays their most valuable features immediately. The following track, “Diamonds,” released earlier this year as a single, and it makes a strong transition into the pop sound developed on their second album. Unfortunately, from there the album dissolves into a monotonous slog.

The following tracks become indistinguishable from each other; the melodies and instrumentation are bland and repetitive. Most importantly to me, their lyrics become devoid of any relatable or unique content. Smith’s lyrics are too vague, singing about “dancing in the dark, drinking wine with your love, dancing all night just the two of us,” or “raise your hands if you feel sad.” Their only emotional appeals are cliche ambiguities everyone can vaguely identify with, but it doesn’t evoke any specific imagery of heartbreak or love scorned that audiences can more intimately relate to.

In addition to poor lyricism, their vocal performance throughout the album becomes gradually worse as they devolve into mumbles through lyrics worse than Lil Xan. Their lack of clear articulation and punctuation is a disservice to their powerful sound. Without the opportunity to accentuate their voice, the songs turn into a mumbled, bland mess, and the album feels like a glass of watered down milk.

“Love Goes” feels long, as none of the tracks land emotionally or dynamically, and this weak third attempt by Smith is not promising for their artistic credibility. It’s starting to look like his first album was a product of luck rather than skill. While Smith’s vocal abilities are evidently incredible, their inability to produce quality albums leaves them as an amazing singer rather than an amazing artist.