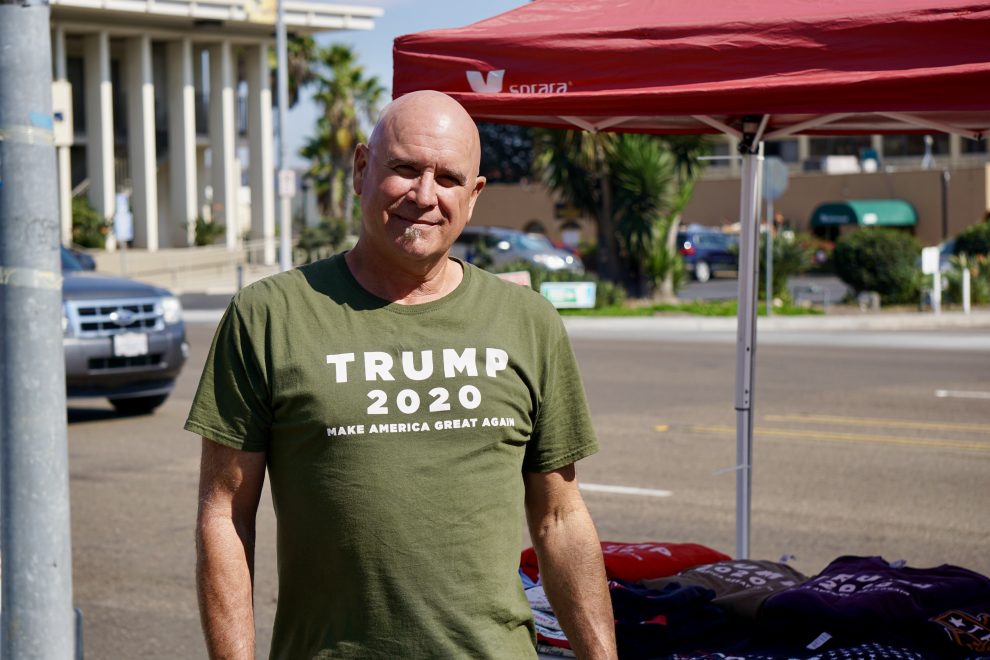 The views and opinions expressed are those of the interviewee and do not necessarily reflect the official policy or position of The Point. Any statements made by interviewees are of their opinion, and are subject to editing for taste, grammar and clarity. Publication of these statements is not intended to malign any religion, ethnic group, club, organization, company or individual.

The executive decision to continue the stand’s presence on Rosecrans St. was made by the unnamed corporation that owns the 15 additional stands across California, according to Lakin. Lakin did not confirm a corporation name.

“It’s working,” Lakin said as he explained that business is booming. “It was crazy all the way through last night [Nov. 3]. Sales have been off the charts for the past four days. It has been the highest totals I’ve seen since being here.”

With Trump paraphernalia flying off his tables and the media attention, Lakin reflected in a Q&A with The Point on his time spent at his Trump stand in front of McDonald’s.

The Point: How has your overall experience been selling Trump merchandise?

Calvin Lakin: It’s been fun. I’ve met so many smart and wonderful people, and at the same time gotten to experience the vitriol and dysfunction of the hardcore left who come by and scream. I’ve had six different times where people have thrown objects at me, including an egg. You’ve got people screaming and cursing. People have the gall to pull up [to the stand] to lecture me and curse me out.

After we first spoke [in an interview for the article “Do You Know The Trump Merch Man?”], a guy came up, kicked my table, called me a racist screaming and yelling hysterically. He walked away, but came back and threatened me both verbally and physically and I had to pepper-spray him. He was trying to hit me.

TP: Were the police involved?

CL: I called the police. Ten minutes later the guy came back and charged me a second time after I pepper-sprayed him, so I did it again. Though it repelled him, before he turned around and left, he kicked this table all the way out into the street. Very violent, very aggressive, screaming and calling me a racist. He was Hispanic, but it’s already shown that one-third of Hispanic Americans voted for Trump*. There’s no racism there. He’s out of his mind. He has believed the deliberately programmed, planned false narrative of their racism.

That’s just what Democrats do — they lie. Collusion was a lie; impeachment was a lie; they tell big lies and that was one of them. It’s rippled throughout their constituency resulting in all kinds of undue violence. Think about it — they’re trying to divide. They’re trying to get people hysterical and it’s worked. There’s violence and it all comes from one side of the aisle, one side only. I’ve experienced it firsthand.

*This statistic can not be confirmed. As of election night, The Washington Post reported Latinos voted for Biden 2 to 1.

TP: You don’t see any sort of perpetuating behaviors from the right at all?

CL: Not from my experience, but you tell me. [The Republican Party] have been a far more reasoned party. They have a more reasoned culture. We believe in traditional values like respect, integrity and honesty. You don’t see people stealing Biden signs. I’ve had dozens of people coming back saying, ‘they stole my yard sign.’ My neighbor put up a Trump sign, his neighbors had a [Black Lives Matter] sign, and people came over and threatened his family; they threatened to beat him up. You do not see that on the right. It does not happen.

On a national scale, the first three years of Trump’s presidency there were over 3,000 reported assaults*. These are the ones that got reported to police of people being assaulted for wearing a MAGA hat. You haven’t seen that on the left. You didn’t see [Hillary Clinton] supporters getting assaulted. It is two separate cultures. One is traditional, reasonable, respectful and the other is crass, ignorant and hateful**.

People didn’t board up the cities in downtown areas because they are afraid of Republicans. They are afraid of the lunatic, hardcore leftists who are going to go out there and trash, loot and burn the way they have in all the major cities. And every single city has been a Democrat stronghold***. The Democrat leadership of the city has allowed it. They have enabled it, so they have actually cooperated in it. To me, that’s the height of unethical behavior. That is not ethical leadership. They have stoked those fires. People of Congress [are saying] ‘Now’s the time to be radical,’ ‘You need to radicalize.’ Kamala Harris said that ****. What does that mean? That means justifying violence.

*This statistic cannot be confirmed. The Point could not find any sources that reflected this information.

***There are exceptions. Read this fact-checking article for more information.

****The Point could not find any source to verify these quotes.

TP: Do you see your experience at this stand as an example of the left’s supposed violence?

CL: No, it highlights the contrast. I have so many lovely people coming up that are positive. I’m surprised at the diversity of age, race and economic level across the board. I’ve had so many college kids; so many kids from [PLNU] who have come up and are delightful, articulate, intelligent, mature. I’m blown away. I’ve had kids coming from all colleges: USD, UCSD, San Diego State [University], and they are wonderful, thoughtful young people who are smart and informed. It’s really the contrast. It’s still 70-30 or 80-20 positive, many more positive people. There are many more positive reactions from people driving by honking and cheering.

But, the other side is a lot more vocal and a lot more hysterical. They’re louder, but they’re not more present, which makes me really question these election results. I’m thoroughly convinced that there was some heavy cheating going on because of how the mail-in ballots, which allow a very easy way to cheat, were emphasized in all the Democrat-run states*. This should have been a landslide for Trump because what I’ve seen in California is just overwhelming support for Donald Trump. I see it passing by my stand everyday.

*This claim is disputed. See data from Pew Research Center about mail-in ballots here, and a fact-check done by USA Today here. 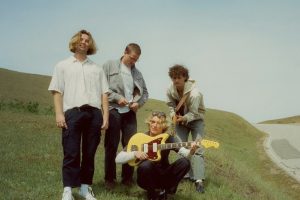 Examining Blackness in Mexico with Ebony Bailey
How LGBTQ Friendly is PLNU?