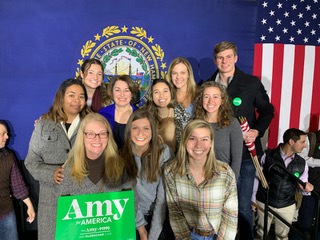 Every four years, New Hampshire’s nickname switches from the “Granite State” to the “First in the Nation,” referring to their long-standing history of being the first state to vote in a primary election.

But why does a state that has a smaller population than the city of San Diego and who is not representative of the U.S. in terms of race or age get to influence the election by voting first?

Why do presidential candidates focus on grassroots campaigning, giving speeches in living rooms and knocking on doors to gain support?

These are the types of questions that Political Science Professor Linda Beail wanted to cover in her “Presidential Nomination Process” class at PLNU. However, this knowledge wasn’t going to come from a textbook or lecture. Instead, our seven-person class was going to learn first-hand by being in the center of the political universe for a week—we went to New Hampshire.

Upon our arrival, colorful yard signs representing the 30 plus candidates running in New Hampshire littered the snow-covered street corners; They read, “Pete 2020,” “Trump: Keep America Great” and “NH for Warren.”

At the ABC Democratic Debate on Friday, Feb. 7, the top seven candidates took the stage as we watched from an awkward side section. They discussed their top priorities as president, their plans for achieving their promises and how they were going to call out their competitors for wrongdoings.

While the moderators went after Iowa winner, Mayor Pete Buttigieg, for his so-called “lack of experience” and inadequate police accountability in South Bend, Indiana, businessman Tom Steyer went after former Vice President Joe Biden for a conflict between campaign workers.

As the tension of the debate rose like a good episode of the Bachelor, Senator Amy Klobuchar fought hard to be the winner of the night. Pushing a more moderate platform compared to her opposition, Senator Bernie Sanders and Senator Elizabeth Warren, she was able to boost her image and start a newly coined term, the “Klobucharge.”

The following day our class volunteered to canvass, which is an essential part of any grassroots campaign. Bundled up to stay warm in the 20-degree weather, we tramped through snow and up long driveways to knock on doors.

The goal of canvassing is to talk to residents about any of their concerns with our candidates and help them establish a voting plan. It was shocking yet inspiring to hear the residents have met most of the candidates they are considering, but they still want to hear from them more before making their decision. These residents showed the responsibility the residents take on to represent the rest of the states, since they know they will have the most interaction with the candidates.

Curious to see how this “Klobucharge” was taking place, our group attended an Amy Klobuchar event on Sunday, Feb. 9. There was a sea of green around the Minnesota senator, cheering for her as she told a story about a man who felt known by Franklin D. Roosevelt and how she knows us because her family struggled with living on low wages and addiction.

This story “gave me goosebumps,” said PLNU senior international studies major Ashley Guzik. “I was on the lookout for inspiration — for a candidate that truly made me believe that they were with me.” These two issues also appealed to New Hampshire voters who have seen how hard the opioid crisis has hit their working-class state.

Mayor Pete Buttigieg held a town hall in a small town middle school cafeteria, where campaign staff packed us in like sardines, and the smell of premade food engulfed the room. And yet, it was hard to resist smiling and applauding as Buttigieg spoke from the heart. Guzik said, “As someone who internally wrestled for years, trying to forge a bridge between political ideology and faith, Mayor Pete [Buttigieg], the first openly gay candidate, became my Christian Democratic candidate.”

Buttigieg’s passion for positive change was captivating. It inspired all of us to start a conversation about how religion plays a role in politics, but also how, as individuals, we can make a change in our community.

We wanted more from Buttigieg, so we attended his election night results party on Tuesday, Feb. 11. After shaking hands with him, PLNU freshman international studies major Annabelle Bartlett said, “I thought back to the great honor and great patriotism of our founding fathers. Pete [Buttigieg] showed me—a registered Republican—that intelligence should command our policy.” Similarly, senior political science major Arden Martinez felt included with his use of Spanish, as in his speech he stated, “Este país es tu país tambien,” meaning “this country is your country, too.”

This experience was like no other. We are a group of seven people who had previously only shared a few words, but we will now remember this trip forever. We traveled 3,000 miles, met six presidential candidates, shared 20 meals, talked for hours about our lives and aspirations, laughed until we cried and made the front page of not just the Boston Globe but the New York Times.

The most important lesson we learned, we learned from one another, and we learned that despite our differences in how we were raised, what we believe in or where we lie on a political spectrum, we could have civil political conversations. While we might not always fully agree with one another, we are seen, and we are known by each other.