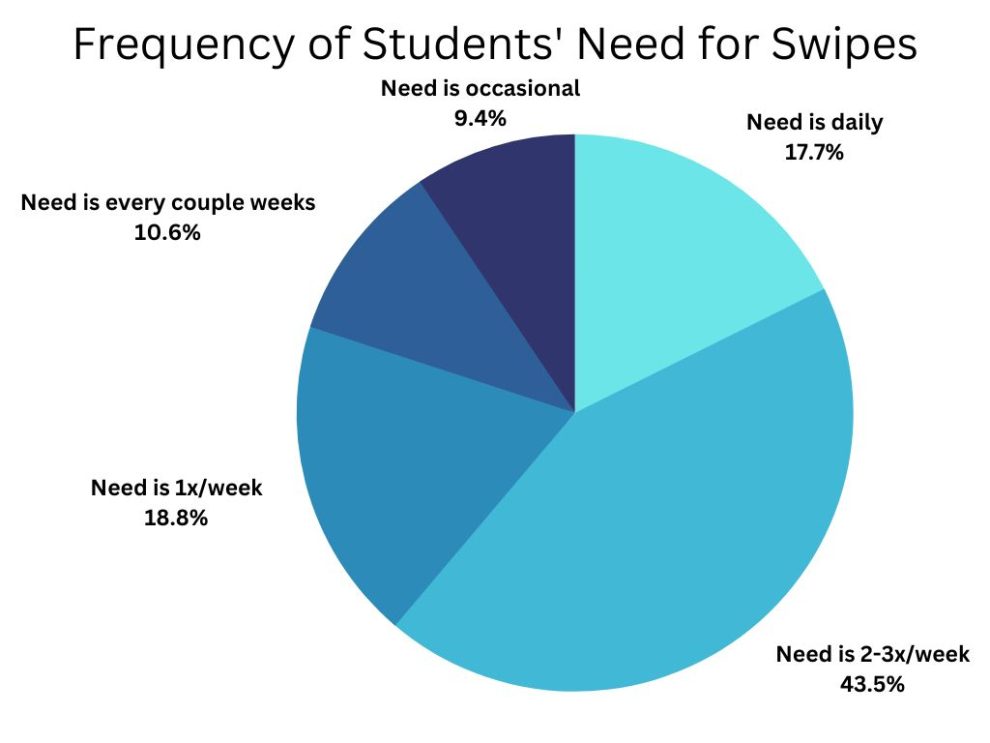 December marks the end of the Swipe Out Hunger program’s first calendar year at Point Loma Nazarene University. Swipe Out Hunger is an organization that aims to combat food insecurity on college campuses across the United States and Canada.

Swipe Out Hunger began operating at PLNU in spring 2022 through a partnership the organization has with Sodexo — the company that provides food service to PLNU. Student care and engagement assistant Jen Klotz, who helps oversee the program, said Sodexo donates one meal swipe for every meal plan purchased, which is around 1,800 per semester. She said that over 3,300 meal swipes have been donated to about 260 students since January 2022.

“Many, many, many of them explicitly named eating meals in the Caf would be helpful,” Wolf said.

Swipe Out Hunger donates dining hall meal swipes directly to students’ ID cards. Over 1,550 meal swipes have been allocated and close to 200 students have participated. The swipes are distributed based on student need. More than 60% of participants indicated that their need for swipes is multiple times a week, 18% of whom communicated a daily need.

Fourth-year literature major Tony Le Calvez participates in the Swipe Out Hunger program and said relying on it is useful when finding money for food is tight.

“It’s a stress relief when I have so many other worries and anxieties because then food isn’t a worry at least,” Le Calvez said.

In addition to Swipe Out Hunger, Wolf hopes students will take advantage of off-campus resources like the CalFresh program and local food banks and pantries, many of which are a 20-minute drive from Point Loma.

Historically, Swipe Out Hunger is not the only on-campus program that PLNU has implemented to combat food insecurity. The university used to have its own on-campus food pantry called Loma Shares. It ran from early-April to mid-May in 2021, which was its trial period as a pilot program. Goodwin resident director Jong Yoon oversaw the program alongside political science professor Lindsey Lupo and Jake Gilbertson, the dean of students.

Loma Shares provided the opportunity for students to receive fresh fruits and vegetables and non-perishable goods with no questions asked, according to the news editor of The Point at the time, Ashlee Owings, who reported on the pantry in April 2021. The pantry was sponsored by Residential Life and the Associated Student Body (ASB).

According to an email sent to faculty and staff from Yoon in 2021, over 200 students used Loma Shares. In 2021, Yoon told Owings that Loma Shares saw a rise in participation almost every week it was open.

Although Le Calvez never used Loma Shares, he said the program addressed student needs in a different way than Swipe Out Hunger does.

“Loma Shares was helpful in a different way since you’d still have to take the time to cook the food, but if it was still here, I would use it,” he said.

Once Loma Shares’ trial period ended, its staff had to create a policy presentation to show to the university’s cabinet. While the pantry was closed for summer break, it was reassessed for its potential reopening in the fall. Loma Shares has not been reopened since its trial period.

A PLNU marketing alumna and Loma Shares volunteer, who requested to remain anonymous, said she cannot say with certainty why Loma Shares ended, but she believes it was shut down by the higher-up administration.

Kellyn Gonzalez, a third-year marketing major and marketing lead for PLNU’s Center for Justice and Reconciliation (CJR), said she heard similar remarks from a CJR coworker.

“I heard that the food pantry did not fit the school’s image,” said Gonzalez.

In an email response from Gilbertson, he said he has not heard these claims.

“I’ve never heard that perspective expressed and it feels contrary to what I know about the people that would comprise ‘the administration,’” he said.

According to Gilbertson, PLNU learned of Sodexo’s partnership with Swipe Out Hunger while Loma Shares was running and a “collective decision was made to implement Swipe Out Hunger and then assess student needs.”

The Point contacted Yoon but he declined to comment on the matter.

In an email to The Point, Lupo, who worked on Loma Shares since its beginning, said that “[her] understanding is that the university wanted to start with the Swipe Out Hunger program first, and then assess whether [PLNU] could sustain a program like Loma Shares in terms of funding, staffing and campus space.” She said she is hopeful that there could be a revival of Loma Shares in the future.

Wolf said she can imagine a future for Loma Shares and said looking into a partnership with a local church to help with donations for the pantry would be beneficial.

“A response to food insecurity for students feels critical and completely aligned with who PLNU is, so that will absolutely continue. In what exact form, I think that’s the question,” Wolf said.

Students can sign up for the Spring 2023 Swipe Out Hunger program through a link that will be sent via email at the beginning of the semester. If you have any questions, contact swipeouthunger@pointloma.edu.

Dare to Dream: PLNU Students and Faculty Honor the Legacy of Dr. King
Voting is Still Happening on Campus: Your Guide to ASB Constitution Changes