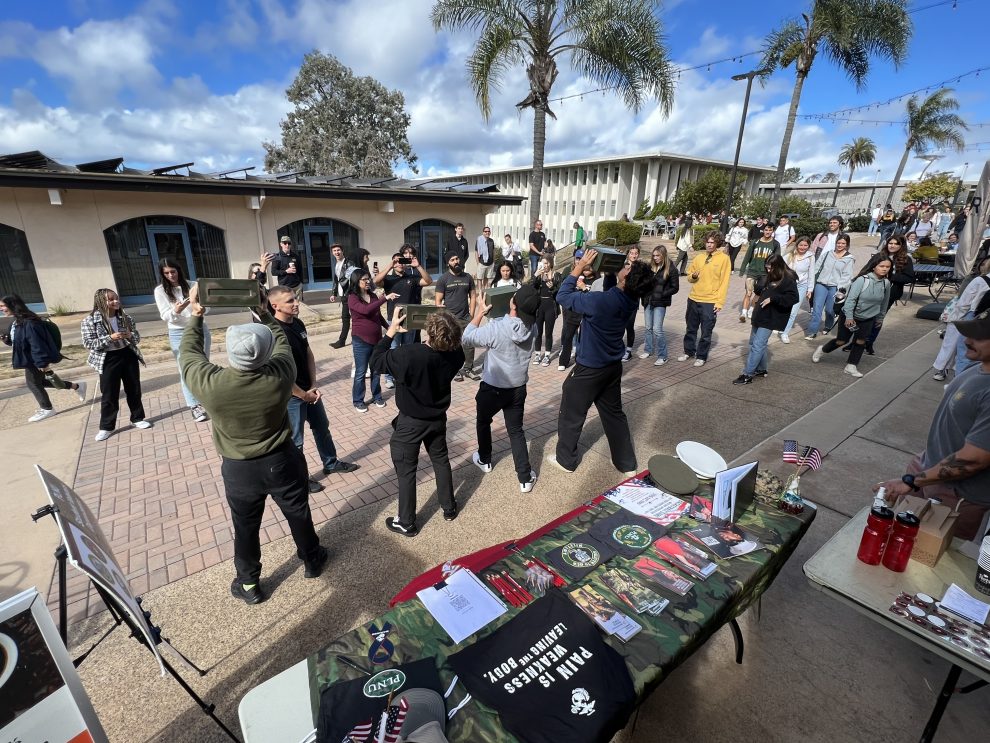 Point Loma Nazarene University Student Veterans of America (SVA) members and veterans gathered outside Nicholson Commons the week of and on Veterans Day to raise veteran awareness on campus and commune with others who have served. Army, Navy, Marines, Air Force and Coast Guard veterans showcased military gear and memorabilia throughout the week, each branch assigned a day to display and share.

SVA President, Navy veteran and fourth-year psychology major, Joni Smith, said veterans engaged with students throughout the week, answering questions about their time in service and the significance of the displayed gear and memorabilia. PLNU military appreciation shirts were also for sale throughout the week for students. Students were encouraged to wear them at two Sea Lion basketball games, on Nov. 15 and 16, in support of all services and PLNU military-affiliated students.

“The Army and Marines were the main instigators,” said Smith. “They have an old competition that goes back generations.”

SVA members who shared in the week’s activities reflected on the significance of their service and the importance of veteran connection and advocacy.

Alex Lugay, former machine gunner for the Marines, SVA member and third-year dietetics major said the best part of being an SVA member is connecting with other veterans, especially when first transitioning back to civilian life and starting school.

“Coming out of the military one of those things I realized I missed the most was the people I served with,” said Lugay. “Ya know, that brotherhood and sisterhood that you had while you were in.”

Lugay, an infantry Marine, each year celebrates not only Veterans Day, on Nov, 11, but the Marine Birthday, which falls on Nov, 10. He says it’s a special time of year because it provides two days of reflection and reconnection with old friends and family.

“Both days are all about remembering those who serve, past and present,” said Lugay. “Growing up in a military family it always meant a lot to me to just respect those who essentially put their lives on the line for a greater purpose than themselves.”

Karolina Hernandez, a former Air Force medic and third-year psychology major, said she chose her major because of her passion to help other veterans.

“I think there is a need for people who really understand and care about veterans,” said Hernadez.

Also a member of SVA and like Lugay, Hernandez said she is grateful to be with others who understand what it means to transition into a school environment after time in service. She also echoes Lugay’s sentiments about Veterans Day.

“It’s all about honoring everyone who has come before us, honoring our country and honoring that virtue of selfless service,” said Hernadez.

Chris Mangrom, a former Navy medic, reflected on his past Veterans Days as a Seaman, when he was given the opportunity to put on his dress uniform and welcome an Honor Flight full of World War II and Korean War veterans back home. Honor Flight flies WWII and Korean War veterans to Washington DC to visit their respective monuments erected in our nation’s capital which includes VIP treatment for the entire trip. When the veterans fly home, they are brought to a cheering crowd, a welcome home some never got while in service.

“That was super awesome because I met a 95-year old Masterchief who told me he was the 15th master chief in the Navy,” said Mangrom. “It was pretty awesome to meet someone who was a trailblazer for our service.”

Mangrom has now been a PLNU student since 2019. Although not an SVA member, he still regularly attends events to feel the camaraderie.

“Being able to be here with other veterans, on Veterans Day especially, being able to joke, have fun with them and them know what I have been through, is really cool,” said Mangrom.
More information on PLNU’s SVA can be found at https://www.pointloma.edu/student-veterans-america 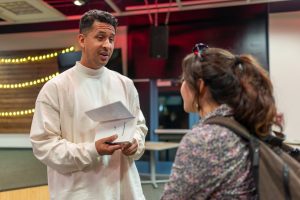