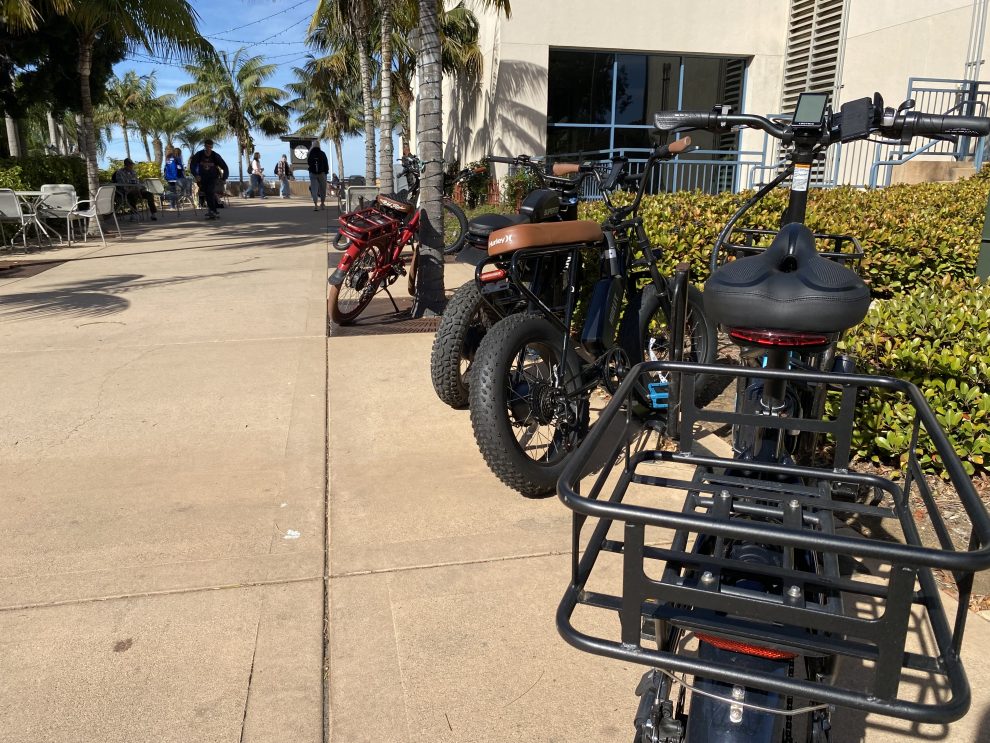 Point Loma Nazarene University students are swapping gasoline for electricity. E-bikers can be seen swiftly gliding down campus roads with their friends piled on the back and filling bike racks outside of Nicholson Commons.

E-bikes are more popular at PLNU than ever before, according to Assistant Director of Campus Facilities Eric Remley.

“I’ve never seen this many e-bikes at the dorms or even up on main campus by Nicholson,” Remley said. “It’s encouraging to me, the fact that we’re seeing students actually using another form of transportation. I think it’s actually a good thing.”

Assistant Director of the Department of Public Safety, Kaz Trypuc, said there is no official count of e-bikes on campus, but that he has noticed an increase.

“I spent a lot of time involved in traffic flow at New Student Orientation and notice things like that from year over year and definitely saw a lot more e-bikes coming through,” Trypuc said. “I’ve seen more students riding around on them. I’ve seen more of them parked outside of buildings, outside of classrooms and at the residence halls.”

Although there is no official count, The Point counted the number of e-bikes visible on campus on Monday afternoon, October 31. In total, there were 21 e-bikes.

Mason Plum, fourth-year graphic design major, said he began using his e-bike due to rising gas prices and his desire to reduce his environmental footprint.

Fourth-year business major, Ella Ross, also started riding her e-bike primarily because of gas prices. Ross said some secondary pros of her e-bike include the exercise it provides, access to fresh air and that it’s eco-friendly. Ross also said that e-bikes eliminate having to find parking in the limited Loma lots.

The rise of e-bikes has posed new concerns for public safety and residential life according to Trypuc and the Dean of Students, Jake Gilbertson.

After a fire in Wiley Hall last year, due to the combustion of an e-transportation device battery, the residential life team was tasked with managing a better system to charge e-bikes on campus.

“Obviously we had no real guidance or regulations around e-transportation devices and then we had that fire in Wiley and what we actually learned in the midst of that is that a lot of colleges and universities have actually banned all of those devices from their campus completely,” Gilbertson said. “That felt problematic for us. I think they’re actually super useful and great tools. Especially with our freshmen not being able to have cars, they’re a really good option there. So we didn’t want to take that step, but they really are a huge fire hazard.”

Trypuc said he had two concerns when it came to e-bikes: theft and fire. E-bikes can be an easy target for thieves being that at Eze Ryders, a bike shop in Point Loma, prices for e-bikes available for purchase online are often upward of $1,000.

According to Remley, the infrastructure for on-campus students to charge and safely store e-bikes is not in place yet, but campus facilities are actively working on solutions.

“I would say that [we’ve] definitely been taken by surprise by it and [are] working to solve that problem, because right now, I don’t see that there is really a solution that’s already there,” Remley said. “I think we’re gonna have to adapt to it and solve it.”

Although there is no official charging location on campus, Gilbertson said he has seen students charging outside of the ARC and around Nicholson Commons at outdoor outlets.

Remley said that the number of e-bikes being stored by Nicholson Commons indicates the need for power at this location. Ross said at locations other than Nicholson Commons, like outside of classrooms, there is a lack of storage for bikes.

“I’m a business major, [and] Fermanian has no bike parking so I park it by the flagpole and put my bike lock around it,” Ross said.

The addition of charging stations and covered storage for bikes will mean an increase in costs for the university, but Remley said he does not foresee it being significant. Additionally, he said, the costs are in line with the university’s goal of reducing its environmental footprint.

The United States has experienced an increase in power outages, according to a report from Climate Central.

Remley said precautions against power outages are being planned. Campus facilities have ordered and are awaiting the shipment of a new emergency generator, which will be placed in the Ryan Learning Center, near the ITS Help Center.

Students, faculty and staff can expect updates to e-bike storage this coming fall.

“We got caught a little bit this year by not being aware of [the increase in use of e-bikes] and prepared, but over the summer, next fall, we will see a lot of changes to that so that the students have a resource there,” Remley said. “We’re adapting.”