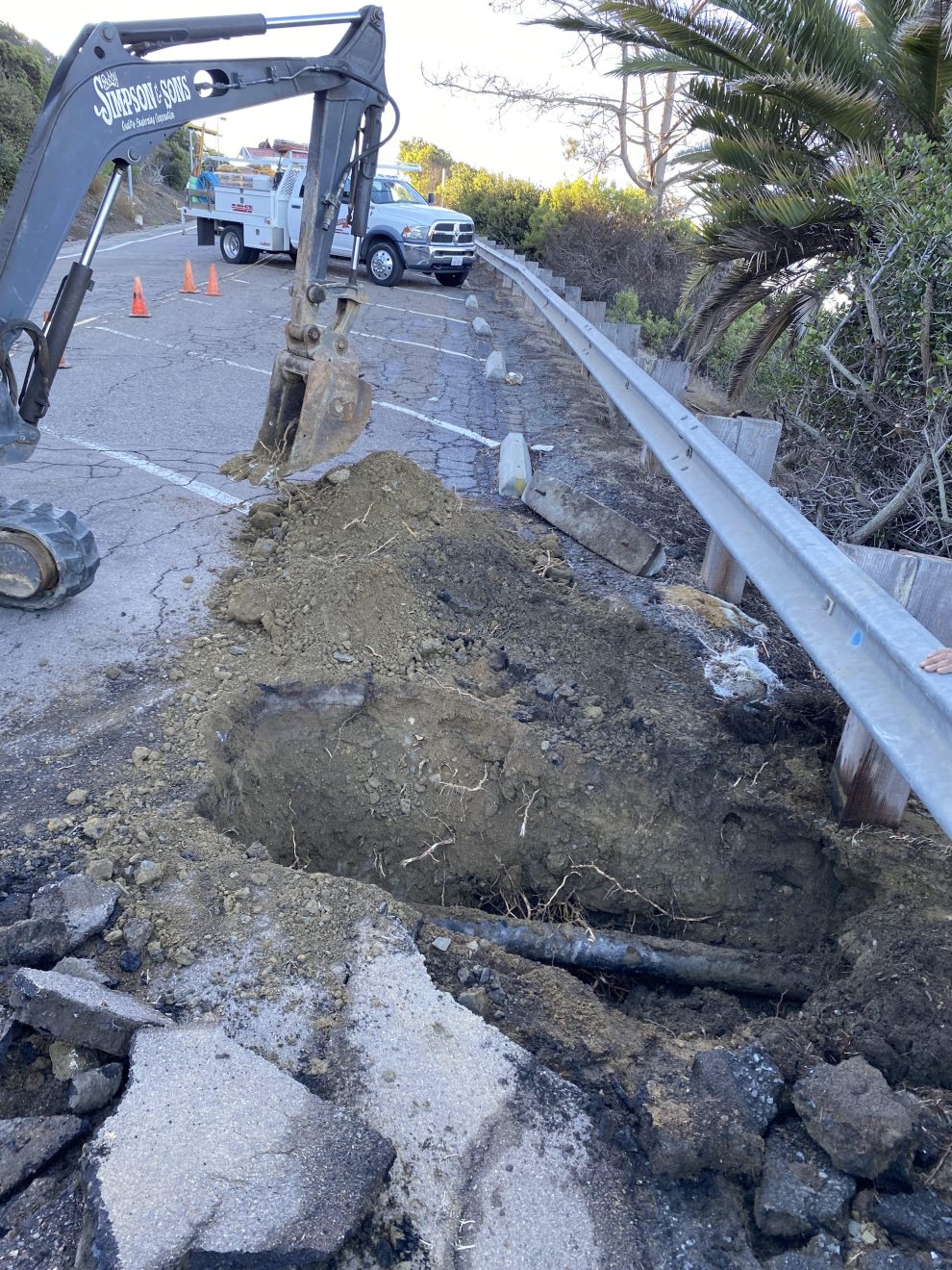 Around 9:30 p.m. last Wednesday, a water leak was discovered by a Public Safety Officer on the road between Hendricks and Young Halls, while they were on routine patrol.

Jeff Bolster (Ph.D.), vice president for University Services explained why the three residence halls’ water systems were turned off when the leak was found before Young.

“The [university’s] water lines have a system of valves…the shut-off valve nearby [Young] was stuck open, so we moved to the next valve up the line. This valve shuts off the water to [all] three halls,” Bolster said.

After Campus Facilities contacted PLNU’s Residential Life, a commercial plumber and excavating and repair crew were brought in. Around 11:30 p.m., the water was turned off and a backhoe was used to expose the pipe. It was then discovered that the leak was caused by a water main break.

Bolster explained that some of the pipes that bring water to PLNU are old, and from time to time, there will be a water main break.

Bri Bortoluzzi, first-year biology major was in her Hendricks Hall dorm room when the water was turned off.

“All of a sudden the water stopped working. People couldn’t use the bathroom and girls were out in the hall talking about what to do. Shortly after, we got an email saying it would be shut off for 8 more hours,” Bortoluzzi said.

Notifications were sent to students in the affected halls about the water being shut off. Tessa Balc, Young resident and second-year political science and journalism double major, said that the news provoked varying emotions.

“The initial text at night was kind of funny to me like ‘Oh can’t go to the bathroom until tomorrow,’ but when I woke up the next morning and saw the next email saying the water was still off, I was kind of annoyed,” Balc said.

On Thursday morning, drinking water and portable toilets were delivered to the affected halls through the collaboration of ResLife, Campus Facilities and Sodexo.

“Point Loma accommodated very well by providing water and portable restrooms for us super quick and efficiently,” Bortoluzzi said. “Thankfully I could fill up my water bottle in the lobby without going all the way to the Caf.”

Dean of Students, Jake Gilbertson (Ed.D), explained that other accommodations were set in place for students if the water main was not repaired by Thursday evening.

“If the problem would have taken longer to fix we were also assessing shower facilities for students, however, that wasn’t necessary given the timeline,” Gilbertson said.

Without running water, students from the affected halls resorted to using other bathroom facilities on campus.

“After eating breakfast, I brushed my teeth in the Caf bathroom with my friends ,” Bortoluzzi said.

However, some still used the bathrooms in their halls despite the water being shut off.

“I know people who peed in showers because they really had to go in the morning so the bathrooms smelled pretty bad,” Balc said.

By Thursday afternoon, water service was restored in the affected residence halls, faster than what Campus Facilities expected.

“They initially thought it was going to be fixed around 6 p.m. in the evening,” Bolster said.

While the pipes were exposed, the plumbing crew installed a new gate valve above Young. This was so Hendricks and Klassen would not lose water if another water main break happened near Young.

Sarah Beckham, resident director of Hendricks, said she was impressed by the speedy response of those involved in finding a solution.

“So much gratitude for the facilities team: Jeff Bolster, Dan Toro, and Jau Medlam to name a few. From the moment the leak was identified to the moment it was repaired, they were extremely communicative,” Beckham said. “Of course, the situation was less than ideal, but I am grateful for the way the university responded.”

Surf Film “Bloom” to Premiere in ARC
Sharks Near Point Loma: Should You Be Worried?