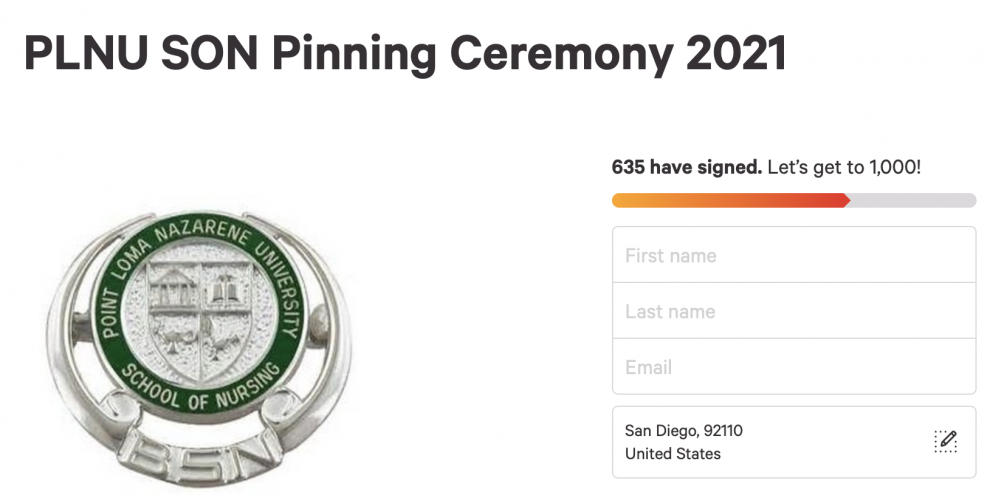 The PLNU School of Nursing’s graduating class of 2021 will have their Pinning Ceremony after all.

The School of Nursing’s graduating class created an online petition more than three weeks ago in response to an announcement made by the nursing department that there would not be a School of Nursing pinning ceremony this year.

The Dean of School of Nursing, Barbara Taylor said in regards to the nursing pinning ceremony that it is, “a very special time symbolizing the transition from student to professional nurse.”

The online petition, created via Change.org by senior nursing major Cammie Tatham, has generated more than 600 signatures. According to the online petition, several nursing students signed a physical petition which was presented to President Bob Brower and members of the PLNU board.

On May 12, the School of Nursing announced via email there will be a modified version of the pinning ceremony for the class of 2021.

In an email to The Point, Taylor said she began to speak with PLNU administration in the late fall of 2020 regarding the pinning ceremony.

At that time, Taylor said there were still many coronavirus regulations and the idea of any celebration was unknown. In mid-spring of this year, Taylor said since things were opening up and commencement was being discussed, she asked if PLNU could do a modified pinning at commencement to celebrate the seniors, which would provide a way to celebrate students with family members present. Taylor said she presented this information to students on April 28.

The reason given in the May 12 email sent to nursing students for deciding to hold a ceremony this year was, “After consideration of changes in the State of California guidance regarding group gatherings, the School of Nursing has made the decision to provide a modified School of Nursing BSN Pinning Ceremony.”

According to the online petition, “Historically, the Nurse Pinning Ceremony includes more than 360 schools in 49 states to honor the students who complete the rigorous course of study. The Pinning Ceremony is an entrenched tradition at PLNU, wherein the University stresses ‘our pinning ceremony is an experience that brings honor and tradition to this area of study. It’s special and unique to this program, and launches our graduates into this profession of caring for the sick.’”

According to the online petition, almost all the School of Nursing students and faculty have been vaccinated for COVID-19, abide by social distancing and have acquired a knowledge of safety protocols.

“Everything we do supports the safety protocols that have been established for control of the pandemic. Simply stated, participation in the pinning ceremony presents ‘zero risk’ of complications,” the online petition said.

There are several comments written under the online petition post expressing frustration by current nursing students, and family and friends of students.

One by Tatham said, “Our nursing class has overcome so many obstacles together and we deserve the opportunity to celebrate our accomplishments! These kinds of decisions should not be made without student input!”

According to the online petition, an in-person conversation occurred between Tatham and some other senior nurses at an NCLEX (The National Council Licensure Examination) preparation day held at the Liberty Station Conference Center with Taylor. The petition said “there was a concern about including family and friends in the Pinning Ceremony.”

Taylor said, “Although I received a petition, it wasn’t signed nor did any of the seniors speak to me directly regarding alternatives. However, in coordination with Dr. Holly Irwin, Vice Provost for Academic Affairs, with student feedback, we’ve been able to reimagine the Pinning Ceremony in line with the continued easing of state and county guidelines and subsequent university policy changes.”

Natalie Haglan, a senior nursing major, said the pinning ceremony isn’t just a “PLNU thing,” but rather something that happens in universities across the country.

Historically, the pinning ceremony allows each graduating nursing student to decide who pins them.

“My grandmother was a nurse and she had her pinning ceremony,” Haglan said. “She was super excited to go to mine and be a part of that. I told her ‘when I have mine, I’m going to have you be the one to pin me.’”

According to Haglan, all the nursing students she spoke to concerning this matter were disappointed when the university originally told them they were not allowed to have a pinning ceremony, especially since other gatherings like graduation, in-person classes and indoor chapel were approved.

“It just didn’t make sense why we couldn’t, especially given what we know about COVID-19,” Haglan said. “It was really frustrating and we made the petition to show our voices and to try to make them understand why it mattered to us.”

“Nursing school hasn’t been easy, and they’ve thrown so many curveballs at us and this is usually the way to recognize everything we’ve accomplished at this point because it’s been a lot,” Haglan said.

PLNU has not attributed the decision to hold a ceremony to the petitions. The modified pinning ceremony will occur on Thursday, June 10 at Liberty Station at 4 p.m. for nursing graduates and faculty only. A Zoom stream will be available for all other guests.