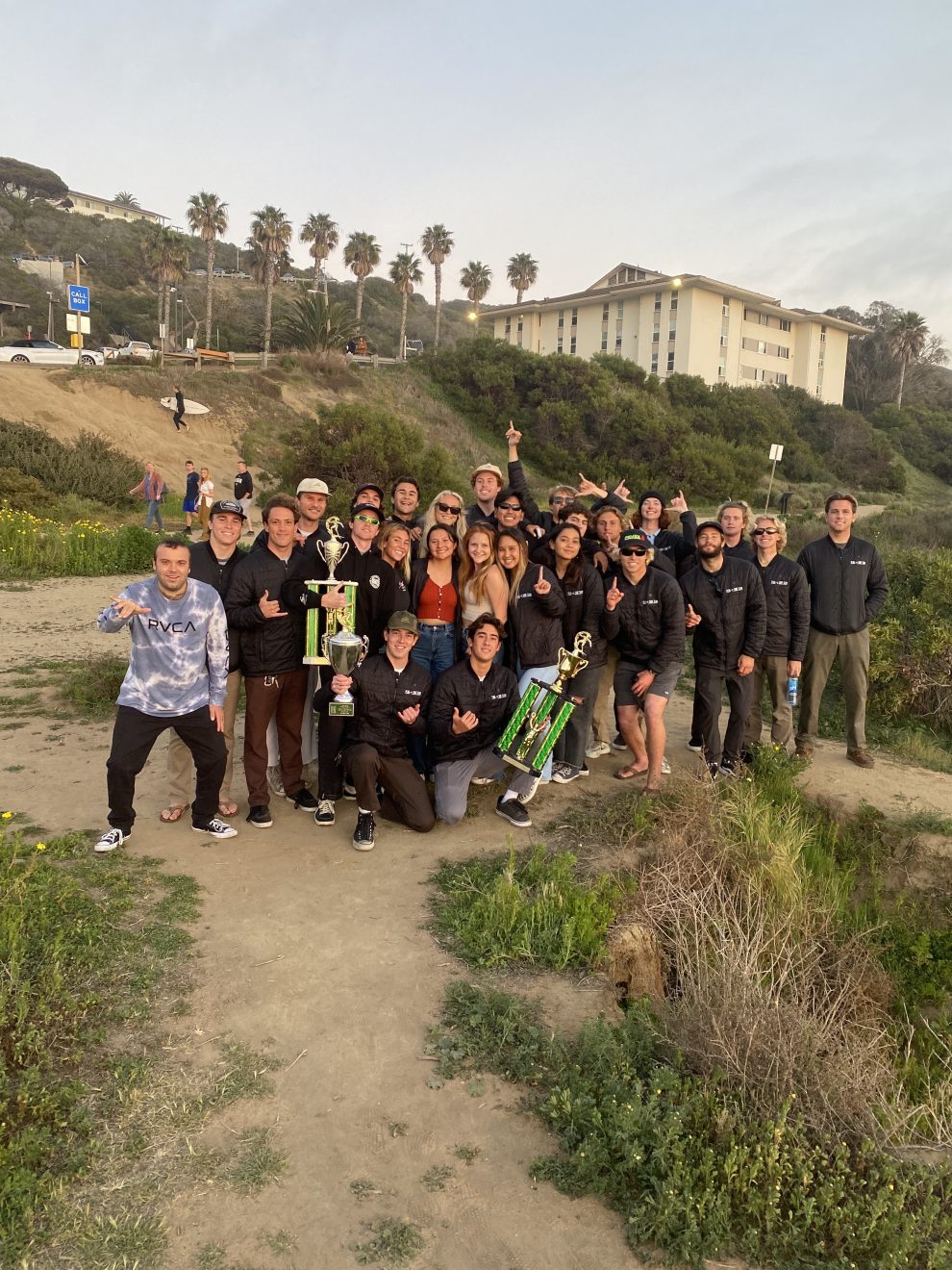 In the middle of all these strong finishes, a standout performance comes from third-year business finance major, Cole Frye, who won the men’s shortboard state champion at this event.

Frye described his stoke after an insane performance against the top California men’s competitors with a final heat total of 16.87 out of 20 points. Surfers are scored based on their top two waves caught within a 15 minute heat. Each wave is scored on a scale from 0-10 points, resulting in a maximum of a 20 point heat total.

“It still feels like [the win] is sinking in, I have done a ton of contests throughout my amateur career whether it was Surfing America, NSSA, or WSL, and although I have won or made it really far in a lot of events, to win a state title in California that so many other talented surfers were competing in from all over the west coast feels amazing!” Frye said.

Facing not only the toughest competitors in the state, Frye explained how he pushed through the mental block before each heat, as he dealt with little time to practice before this contest.

“Instead of focusing on who was in my heat, strategy, or equipment, I just kept telling myself that all I needed to do was have fun with the heats and not take it so seriously,” said Frye.

Frye’s favorite part of the contest was surfing the final with his friends and scoring his last wave that brought home the win for PLNU, both of which were attributed to his “fun philosophy.”

Second-year business administration major, Kennedy Hurley, also took on the “fun philosophy” as she examined her mindset which pushed her to 3rd place.

“I just wanted to get a good result and surf fun waves. I really wanted to make the finals, and I’m super stoked I was able to pull that off,” said Hurley.

Third-year chemistry major, Jacob Baer, points out the high stakes this state-level competition brought, one being the live scoring. In live scoring, the judges enter each surfer’s wave score into an online live stream and announce each score to the competitors in the water throughout the heat.

“The live scoring was pretty game changing, being able to see where you’re at during a heat or others during their heats. I remember in my quarterfinal heat I was waiting on a good wave for a higher score and I heard I was in 4th, so I had to make a quick decision to take a less desirable wave. Since it was still only my second wave, that brought me to 2nd place,” said Baer.

While these team members can thank mostly their incredible skill, Baer pointed out “our team is likely the most supportive and community centered of all the teams. This doesn’t only make us stand out but I think it’s a pretty big reason we do so well.”

With a winning streak on their hands, the PLNU surf team anticipates Nationals.

“Our team is super stacked this year, everyone rips. Based on our performance in the past couple contests, I would say that we have a pretty high chance of doing really well at Nationals,” Hurley said.

Come out and support the PLNU surf team June 17-19 at Salt Creek Beach in Dana Point to see for yourself!