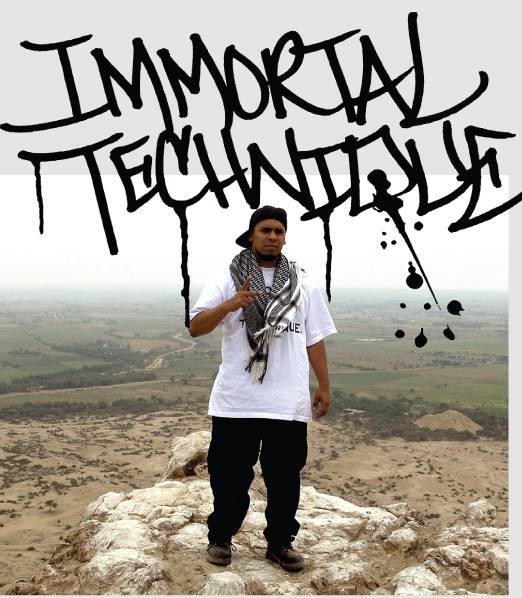 Tony Le Calvez is a junior literature major and the arts & entertainment editor at The Point. His “Out of the Glovebox” column focuses on highlighting both popular and obscure albums that some 2000s kids grew up listening to in the car.

If I had to describe rapper Immortal Technique in one word it would be: confrontational. I was introduced to him by a kid at summer camp. Sneaking out of our cabin after dark, sharing each side of a headphone plugged into his contraband MP3 player, this fellow camper wanted to show me an album his dad kept hidden in a CD case labelled “4 Hours of Mozart.” Nothing could have prepared me for the cold-blooded delivery and confrontational spitting I heard.

Song after song hit me like a brick. Technique’s songs are brutal and uncensored. Born in Peru and raised in Harlem after his family escaped the Peruvian Civil War, Immortal Technique’s traumatic family history and tumultuous upbringing fuel the radical and Marxist themes of his music. After a stint in jail for repeated altercations in college, he left school to pursue rapping full time on the underground New York scene, where he sold copies of “Revolutionary Vol.1” by hand. His lyrics reflect his frustration and anger with the capitalistic systems that led to violence in his country and the drug-laced crime he grew up with.

As important as the content of the album is, so is the context of its release. “Revolutionary Vol.1” came out a year to the day after the September 11 attacks and amid the fury and anger directed toward George W. Bush and the Federal Government. The black and white album cover is a brutal depiction of gunned down police officers in front of a bullet riddled and graffitied brick wall. Immortal Technique had no intention of being nice or censored. The album is meant to shock, antagonize and instigate. The artwork and release feel uncomfortable but are appropriate to the content of the music.

Right off the bat, the first song “Creation & Destruction” jumps manically from topic to topic; abortion, racism, liberal virtue-signaling and white privilege, nothing is out of bounds. Technique has strong opinions on so many things and can’t stop himself from saying something about everything in the first three minutes. It’s not just rap music, it’s a self-indulgent expression of outrage, a concentrated manifesto of political disgust and a personal account of living through and escaping from crime and evil.

One minute he’s trashing conservative Americans on “Dominant Species” and the next he’s smacking liberal Americans on “Beef & Broccoli.” Technique’s agenda of criticism is not biased between political alignment or race, only toward what he considers to be hypocrisy and injustice. This overused antagonistic language is in line with his album. He doesn’t use the word “Revolutionary” lightly and really means to use music to infiltrate the preconceptions of his listeners.

My mission is to take you, lyrically break you
Lyrically assassinate you
Lyrically incinerate your body and recreate you
To destroy the power that mentally incarcerates you
Cause even though I rip it better I could not forsake you
You’re my people with the same oppressors so how could I hate you

While sometimes he can seem preachy, Technique’s self-aware attitude and thematic consistency makes that preachiness tolerable. Halfway through the album, on the track “The Poverty of Philosophy,” Technique switches to spoken word to express his political and economic opinions. It is more straightforward than his other songs but it’s so vital to the themes of the album that I can’t help but feel impassioned by what he’s saying. Whether or not I agree with it, his conviction and rhetoric is so researched and well-constructed that his effort deserves the listener’s attention.

Another complaint I hear that turns off most listeners is the brutality of his story-telling. The song my friend at camp wanted to show me and one I’ve never forgotten is “Dance with the Devil.” This Faustian tale of a young man trying to make it big as a drug dealing thug presents the cold-blooded reality of how crime and injustice can corrupt innocent people and bring harm and destruction to entire communities. His profanity riddled horror stories of life in a ghetto are hard to listen to and even harder to stomach, but the gravity of that living situation and the passion of his delivery demands that listeners stick through it.

Due to the independent and limited release of this album in physical copies, it’s taken years for me to find it since that week at summer camp. Fortunately, when I was digging through my friend’s glove compartment I happened to find one of these handmade copies he had found at a used book store. It has since been added to streaming services and I hope its online proliferation will bring more attention to the outspoken, but relatively obscure, Immortal Technique.

*WARNING: This album contains themes and language that might be triggering or panic-inducing to some listeners, please proceed with caution.*