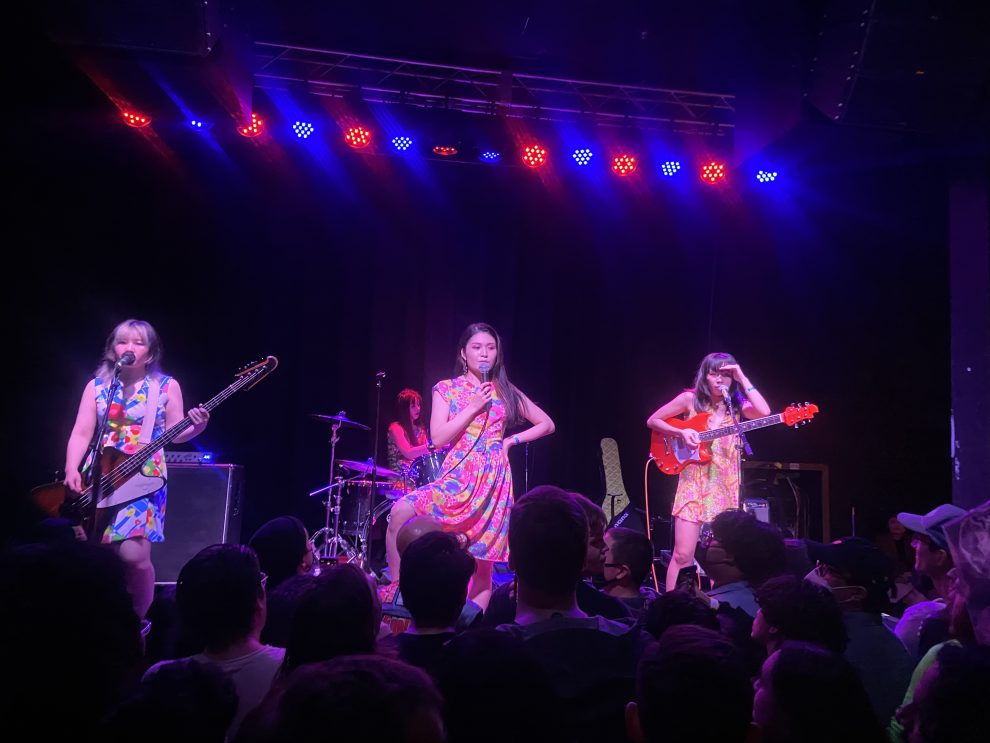 Japanese punk rock girl-band Otoboke Beaver stopped by San Diego and Orange County this weekend on their 2022 North American tour. I missed the chance to see them in San Diego on Friday, so I made sure to scoot up to Santa Ana, in Orange County, A.S.A.P.

The band performed in the Constellation Room at The Observatory, a dense, dark, curtain-laced space that fits a little over 200 people. Breaching the curtain and joining the crowd, I immediately felt like a disturbance. I got to the show 15 minutes after the opener started and I’ve never felt so much like an intrusion. Not at all like a fly on the wall, but like an angry bull at a wake.

The band opening for Otoboke Beaver, Sprain, was putting on an avant-garde, yet familiar set; as if David Byrne were trying to cover all the popular experimental bands of the moment into one: Xiu Xiu, Swans, Lingua Ignota, Godspeed You Black Emporer!. It wasn’t bad per se, but while skeptical at first, I found myself engrossed in their performance and came out of it feeling very neutrally.

I had come for a reason and it wasn’t avant-garde David Byrn; it was loud-mouthed, fast-paced, Japanese punk rock. I don’t typically like a lot of punk rock; I like pop-punk for the whiny charm, but original punk stuff like The Clash and The Ramones just hasn’t resonated with me. Japanese punk typically has a lot of the same features, but the way Otoboke Beaver employs them stirs a turbulence in me that no other punk band has done for me before.

Their 2019 album, “Itekoma Hits,” was one of my favorite projects of that year and their newest album “Super Champion” keeps the Otoboke Beaver train running through 2022.

The COVID-19 pandemic, canceling all of their international tour plans for several years, had created a tension among fans who were more than energized to see the band. This was an opportunity for everyone to make up for lost time in 2020, and that energy vibrated through the room.

Within minutes of the opening band packing up and leaving, the members of Otoboke Beaver came to set up their instruments. One at a time, all in matching, neon flower dresses, the band members set up their equipment, pretending to throw equipment at us and yelling insults. They looked just as excited as we were to be there.

The guitarist, Yoyoyoshie, who knew only how to speak in a screaming snarl, screamed “WE ARE OTOBOKE BEAVER!!!” before hesitating to crowd surf. She didn’t go for it, but the energy was there.

By then, three out of four members were ready; only Accorinrin, the lead singer, was missing. The lights went down and from the shadows behind the stage, she emerged, strutting to the front of the stage. She was enthralling. She thrust the microphone in the air with her right hand and raised her index finger to her lips with her left.

The room was electric and noisy, but the band members stood frozen on stage. We all tustled on the floor, wriggling to start moshing and pushing to the hailstorm of songs we knew were coming, but nothing happened. People shouted, people hollered, and it all came to a dead halt when Accorinrin firmly commanded, “silence.”

For just a moment, the shock muzzled us, but it was not enough. The boisterous and the egotistical, the ones who want to be funny, started yelling and cheering. Some barked at others to shut up, but created just as much noise themselves. I stood in silence, spellbound by the all-seeing gaze of the lady holding the microphone, with her fist still in the air, rigid as a statue.

Her eyes were penetrating and they demanded silence. All the band needed was the sound of her breath, piercing the silence as she inhaled into the microphone, to explode into their first song.

I didn’t think I would need my earplugs to suppress the sound of dynamite blowing granite when I chose them at the hardware store, but better safe than sorry was indeed the way to go. When they started, everything shattered; it was chaos.

The singer, who had once been made of stone, erupted into a blazing entity of rage and passion, delivering fast lyrics with an astounding ferocity. The drummer was enshrouded by a cloud of brown hair flipping around and cymbals bouncing off their pegs; stick heads flying everywhere. The guitarist dove into ripping melody lines, accompanied by the bassist, chill as ever, and everyone was screaming: the band, the crowd, me, everyone.

Song after song, the band was relentless in driving the audience one way and another, everyone trying to get as close as they could to the shredding on stage. Between a blurry period where I went from one side of the room to the other in a whirlwind of hands and elbows, the woman with the microphone lifted her hand again. Once more, she demanded our silence.

This time, members of the audience were less willing to give it, yet her sternness was uncompromising. She repeated the demand for silence, between every song now, never acknowledging it and always using her energy to reign us into submission.

Finally, after many repetitions of her stoic instruction, she rested her hands together in prayer. The room fell to silence. A few people made noise, but they were quickly stifled by the hundreds of eyes shaming them and the countless shouts of “Shut up!”

But one man, you all know the man, he’s a 6-foot-tall white man, shirtless and stinky, you can’t tell his age, he could be 17 or 40 for all you know, he spilled half his drink on everyone around him within five minutes of walking in, and this man had the nerve to challenge the authority the lady with the microphone had clutched from us.

He yelled at her, “Gracias! Say Gracias! Konichiwa!” She did not look at him. Her eyes were fixed to the horizon. He yelled again, but I couldn’t tell what it was. Another man yelled, “cállate cabron!” and she betrayed a grin. The loud white man, thinking this was a sign to keep going, went back to yelling. “Konichiwa! Say it!”

Her head darts right to him, her eyes like a snake’s and the grin replaced with a scowl that would melt me like butter. She points at him and yells, “SILENCE!”

All at once, the band erupts into chaos and so does the room. I see four large men leap onto the loud white man, submerging him, and I feel two hands grasp my side and my shoulder before throwing me across the room. Both feet in the air, I prepared to fall, but two more hands on my back launched me back onto my feet and straight to the edge of the stage, where I bit my lip colliding with the guard rail. I never saw the loud white man again.

The next part was a haze; between the taste of blood in my mouth, the smell of sweat making me nauseous, and the invisible fists pounding into my ribs, I no longer had any sense of focus. As if the teacher was punishing the entire class for one loud mouth, the lady with the microphone never gave us another break. Each song broke directly into the next one and we had to face terror and plead for forgiveness before she would return her mercy.

I don’t know what it is about men, but the men here couldn’t handle her. She drove them mad. The music never stopped and the alpha males, who had lost control over themselves, had begun to infect the pit. Most of them became shirtless and instead of pushing, they were wildly swinging their fists and elbows left and right punching everyone around them.

One man, who had run out of people to punch, resorted to punching himself. My eyes were glued as he walked past; like “The Thinker” consecrated to flesh, with his clenched fist he was bashing his own face, all the while blood streaming from his nose. At that moment I thought to myself, “bruh wut am I doing here, amigonnadie?”

But I did not die, no, for the lady with the microphone heard our pleas for mercy. The songs slowed down, we caught our breath, and the violence dissipated. Penance was paid. Finally, the band introduced themselves and even wanted to take a selfie. They were stoked to be in Santa Ana, told us to buy all of their merch and if they ran out, to go buy it at their bandcamp website. We were their thralls by then, whatever they asked of us we would do.

They played two more songs, the last of our energy was spent, and theirs was fading. They abruptly ended their set and came out immediately to our shouts of “encore!” but they told us that due to their schedule they only had one minute to play. The guitarist finally found the confidence and jumped right into our waiting hands, playing the entire minute floating on the crowd around the room. Back on stage, she yelled “WE ARE OTOBOKE BEAVER!!!” The music stopped, the lights came on, and they were gone.