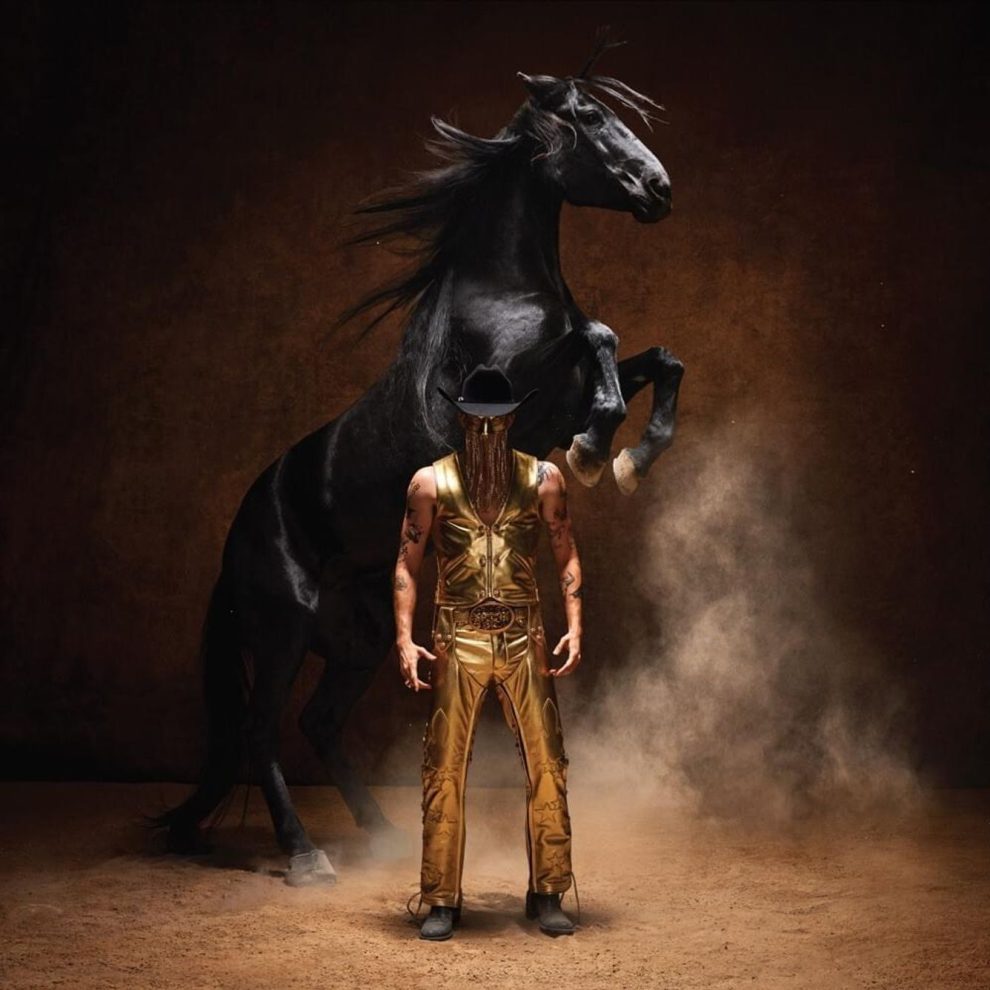 The country music industry might not like it, but what they need is a gay, Canadian, cowboy crooner to save them from a pit of redundancy. There are a few voices in the mix that are trying to pull country back to its roots and away from the frat-boy, finger snapping, country pop trash: most notably Chris Stapleton, Kacey Musgraves and Tyler Childers, but they all lean either into Americana sounds for a folk aesthetic or into indie pop innovations.

But what happened to the classic country? Like Loretta Lynn, Conway Twitty, or hey, even Elvis? Songs centered on love and heartbreak, a barb-wire tinged tenor voice, packed with bravado but wrapped in vulnerability?  The fact that Loretta Lynn at 90 years old can still drop one of the best country albums of the year in 2021 speaks not only to her amazing talent, but also to the lack thereof in the industry.

For a moment, I thought that kind of music was dead until I was introduced to Orville Peck. Arms covered in tattoos, face hidden behind a fringed mask and all of it topped off with a gallon hat, Orville Peck’s refreshing take on classic old-time cowboy country is the stylistic step back that country music needs to get back on track.

Peck just released his latest album, “Bronco,” on April 8, after teasing it for months with dramatic music videos and segments of his album released in chapters. The first three songs on the album satisfy everything I hoped for in this project and there were still 12 more songs for me to go through. Reaching a runtime of almost an hour, “Bronco” is loaded back to front with the bravado, grandiosity and vulnerability I have been craving in my country music.

The opening track, “Daytona Sands,” was my favorite single leading up to the album’s release; I love the building intensity, the desperate vocals, and this 3-note motif on the electric guitar that I’m starting to hear in my sleep. “Kalahari Down,” “The Curse of the Blackened Eye” and “Daytona Sands” set a strong tone for the album; they express the most evolution from the sound on his previous album, “Pony.” The other songs bridge that gap between the two, combining elements of old and new, so fans won’t feel like he’s changing too dramatically.

Something about Peck’s drum rhythms stick out to me, playing in a style that I’m not seeing in bro country. A lot of the beats rely on the relics of Americana tradition; the American shuffle with its 6 over 4 rhythm comes to mind. But even better than that are the songs built on patterns that reflect the changing gaits of a running horse.

Horse gaits, walk, trot, canter, and gallop, all have distinct rhythms and different times based on the sound it makes when the horses feet hit the ground. The drum beats on “Daytona Sand” and “Any Turn” especially emulate that running horse spirit; they fit perfectly to the image of the cowboy speeding through the chaparral sands and into the sunset.

Peck is currently starting his “Bronco” tour and I had the pleasure of seeing him in San Diego at Humphrey’s by the Bay on Shelter Island. As he got on stage, clad in white leather, bare biceps shimmering under the stage lights, white archtop guitar in hand, I knew we were in for an unforgettable performance. When he spoke into the microphone to say hello, it struck me that his speaking voice was identical to the deep resonating tenor of his singing and that he was the real deal.

Peck played for an hour and a half without interruption, sharing stories, singing songs from “Bronco” and his previous album, “Pony,” all while presenting some of the best showmanship I have seen at a concert since before the pandemic. He was almost too polite, thanking the audience after each and every song, and despite the size of the venue, the experience felt intimate.

Both the album and his concert felt refreshing amid the banality of current country music. Skipping through the “Fresh Country” or “New Country” playlists on Spotify can feel like listening to the same three songs for over an hour; with the amount of lyrical redundancies and lazy writing, you’d think it was an audiotape of the Bresee Collective Manifesto.

Consider these lyrics, “I know you like Bud Light/ I know you got blue eyes/ I know you/ got my heart beating in this bar/ Tonight we can jump in, fall into something/ And the perfect place to start is…” Can you guess the song? Trick question, every reader can probably think of five songs with a variation on these same lyrics. Now just imagine them sung by a white man with a paintbrush haircut, leaning into the hard R’s as much as he can, and you might be able to narrow it down to four.

When reviewing the Country Music Association Award winners of the last ten years, you see the same names: Luke Combs, Miranda Lambert, Eric Church, Carrie Underwood, Garth Brooks, over and over again. How many times can the CMAs award these artists for rewriting the same song about drinking beer and driving trucks, or throwing their man out on the lawn?

Honestly it’s embarrassing, and I hope that artists like Peck will continue to crop up and overturn the country music paradigm the industry seems to be trapped in. I’m not sure where it happened, but suddenly the industry started catering to frat-boy, flag-toting, homophobic, concealed-carrying in a Walmart kind of men. Hmm, that description might be more apt to describe the fascists at Turning Point USA, but I imagine the fan base of both groups is about the same.

The target audience of the Country music industry is no longer the country-living working man, it’s the salmon colored, boat shoe wearing jock, and his Delta Gamma girlfriend. Only time will tell if the country music industry will start to praise talented artists like Peck who revitalize the spirit and energy of country music, but I guess it all depends on how much money it makes, because that’s all the industry seems to care about.

Top Five New Game Releasese to Keep an Eye On
Out of the Glovebox: “Stankonia”